I recently performed a flight using an EDF jet fitted with a Matek H743-Wing v2 running Plane 4.1.6. During this flight, there were 854 (!!!) switches between EKF3 and DCM over a span of less than 4 minutes. There were no pre-arm failures or other indications that the AHRS might be unhealthy before the flight, and the aircraft was flying reasonably well the whole time.

I suspected that there might be inconsistencies between the two IMUs on the board, but they both appear to agree throughout the flight. However, I noticed that both IMUs are consistently reporting an average Z-axis acceleration value of nearly -12m/s/s. I am flying this model on Earth, so this value is odd. The fact that the two IMUs agree about this makes it seem like it’s not a hardware issue - at least not the IMU hardware.

Could this be the root cause of the EKF3/DCM switching? If not, what else should I be looking for? Log file is available here: 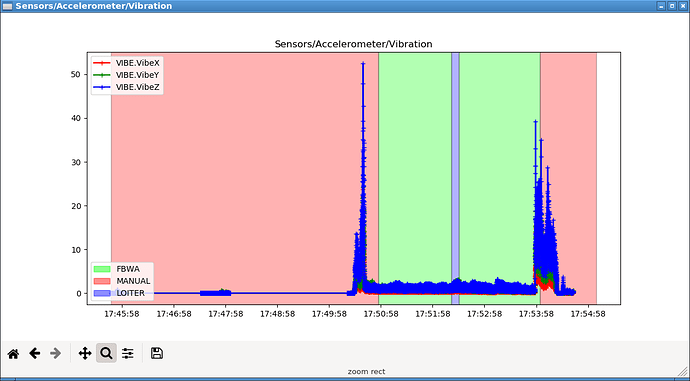 Hi, thanks for taking a look! What’s the rule of thumb for excessive vibration? The wiki says “Vibration levels below 30m/s/s are normally acceptable”, and it looks like my values are only 1-3m/s/s during the flight. There’s some higher stuff during takeoff and landing, but only because this model was doing rolling takeoffs from a pretty rough runway.

Perhaps this is due to large velocity innovations? I think the EKF is deemed unhealthy if the summed squares of these is greater than one, but I’m not sure about that.
@tridge or @hwurzburg should know 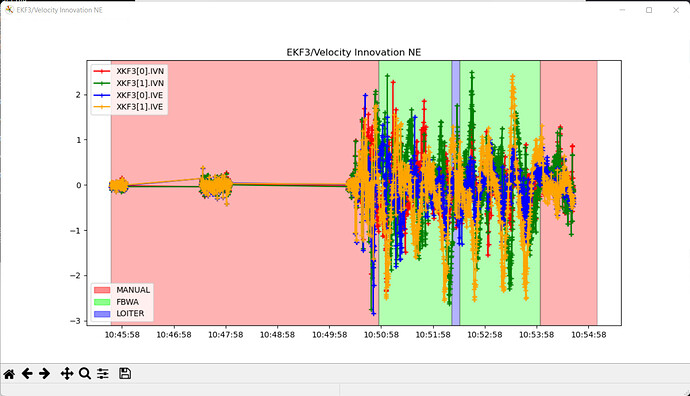 @tridge will have to respond…I think that graph is not normalized so those are 1-2m/s deviations from the EKF predictions…so not big at all AFAIK…the normalized innovations (from any source) are well below 1 (above one, sensor reports are rejected) so as far as I can see there should not have been any EKF fallbacks to DCM… compass seems good with expected yaw matching and innovation only 10-20mgauss, airspeed tracks gps ground speed…vibs are low, accs track each other…beats me…it will be a learning experience for me to hear what @tridge determines…

What’s the rule of thumb for excessive vibration?

I can’t give you any numbers. At least the vibrations should not create any clipping of the acceleration sensors.

the trigger for this issue is a very large ground effect on the barometer, over 20m on landing. This leads the EKF to declare that it cannot provide a vertical position which is what triggers the DCM switch. The rapid toggling back and forth between EKF and DCM looks like a bug.

Thanks for the insight! I’m wondering if the ducted fan is affecting the pressure inside the cabin where the flight controller is. The ducting is separate from this area, though there are a couple small vent holes for cooling airflow connecting them. Looks like there is some coupling between throttle and baro altitude when the model is on the ground.

Do you think setting the EKF altitude source to GPS would be a reasonable solution?