Elevons not available on Arduplane?

Recently I installed the default recent 3.8 firmware using Mission Planner into Pixhawk PX4FMU 2.4 board for my FX-61 wing project. During radio calibration I clicked to enable Elevons but the software notification was “Elevons not available on Arduplane”.
Anyone experienced the same problem? 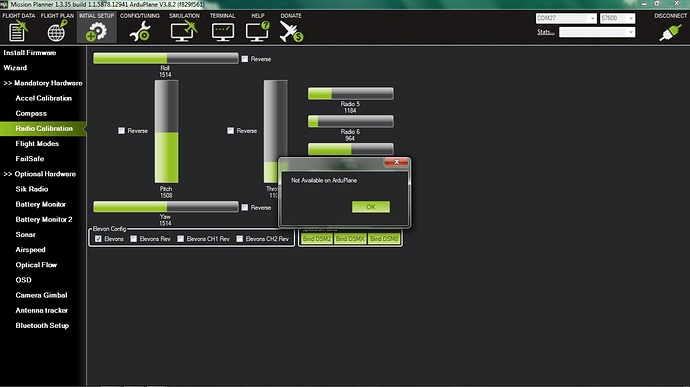 Method has changed and it was explain on arduplane. You have to deal with servoX’s parameters where X represent number. Now you set AETR on radio like a regular plane and it works well. It’s more easier now. You don’t have to tick the box in MP, MP is outdated for this function

I followed the steps in http://ardupilot.org/plane/docs/plane-3-7-to-3-8-migration.html
My steps are as following below;
Steps:

In Manual Mode I tested the elevons mixing but its not working.

Did you arm the plane first? Also, try power cycling the FC and read the SERVOx_FUNCTION again.

GregCovey Yes I did the arming first.
The motor spins when I push the throttle stick up. (Im using mode 2)
What I mean by elevons mixing not working was that when I (left stick) push elevator stick up and down only one side elevon moving and when I move the aelerons left- right only the other side is moving.
I think I missed something which I didnt set properly in the parameter list.

I think I missed something which I didnt set properly in the parameter list.

Ahh, I see now. Yes, the elevon (or v-tail) setup can be annoying but it looks like you are almost there.

Step 1 was to use the Elevon Planes section in the Wiki.

Step 2 was to use the RC Inputs or RCMAP, which you have done.

Step 3 is to get the reversals right as kikislater suggests. Keep following the Elevon Planes section until you get to Servo Reversal. This section explains what to adjust. I needed to read it when setting up my mini Talon using v3.8.2 for the first time. The new procedure will soon become our old friend. Hopefully, Mission Planner will catch up to the changes soon.

And, thanks to help from other contributors here, I discovered, after doing that, that you may need to go right back to the transmitter and reverse the direction of travel of one or more of the control surfaces there, and then go through the routine described again in order to get the compensation directions correct.

Hi All,
Thank you for the replies. Now I got my Elevons mixing working. What I did was;
First I make sure that my Radio Elevons mixing are working by directly connecting the servos to the reciever and do the reversing in the radio.
I watched in youtube video done by painless360 https://www.youtube.com/watch?v=qVEzioyMbtI that actually SERVO1_FUNCTION 4 & SERVO2_FUNCTION 19 number code for elevons and not as mentioned in http://ardupilot.org/plane/docs/plane-3-7-to-3-8-migration.html#change-to-elevon-vtail-and-flaperon-configuration as number code 77 & 78!!!

Now leads to another problem which is in FBWA, the elevons does not counter at the right directions. When roll to left and right only the right side elevon is moving and nose up nose down only the left side is moving! What could be the problem?

I am currently setting up a couple of wings with elevons.
It’s easy to get tied up in mixing, but I found it straight forward by following the wiki.

Tx set to normal aircraft, no mixing.
Set your servos_function to 77 and 78

That’s it.
Mine worked straight off, with a bit of tweaking on the reversing (in the pixhawk)

Set it up like this in manual mode then checked FBWA and all worked.

@mboland Thank you for your comment. Maybe I should try set my Tx to normal aircraft no Elevons mixing. Im using Futaba T8J. I have not tried this method yet.

With the help from you guys finally I found the right way to get my Elevons working.
The steps are as following.

Many thanks for sharing your solution! I’ve gone through pretty much the same string of problems you did.

Ya, the 3.8 almost completely different from the previous version. Pls read carefully the guide before doing your project. Of course not all details is covered there depending on what hardwares you are using but you can ask in the forum here so all of us can learn like you did from my topics. thank you

new build here with Matek f405 wing, followed all recommended settings but the moment i plug in the battery the left elevon goes down.
i have SERVO1_FUNCTION on 77 and servo2 on 78, servo 3 is 70(throttle), in the servo output tab #1 is set to Elevon left and #2 is elevon right and #3 is throttle.
On the FC the left elevon is connected via s3 and right to s4 and throttle is coming from s1 on the board
and not just the left elevon goes down after plugging in but the servos are not responding to flight mode changes as well not by movement or any other way, trying since a month now finally gave up and thought to bother you fellows