I take off in MANUAL mode and switch to FBWA a few feet off the ground. When I do, the airplane does a quick up-down-up-down-up-down waggle. It takes less than a second, and then the elevator is smooth for the rest of the flight. This behavior is consistent between flights. The screenshot is from the log in the link below, but other logs in the same directory show a similar pattern.

What did I misconfigure? 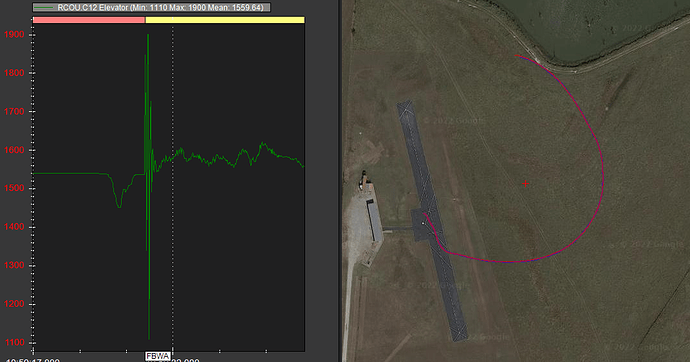 The moment you switched from manual to FBWA the plane had about 22 degrees nose up pitch and about 24 degrees left roll. The RC stick inputs were (more or less) neutral. So as soon as you entered FBWA the plane is is quickly trying to reach level nose and wings. With over 20 degrees of error on two axis I’m guessing what you’re seeing is the tuning reaching it’s limits for error correction speed. 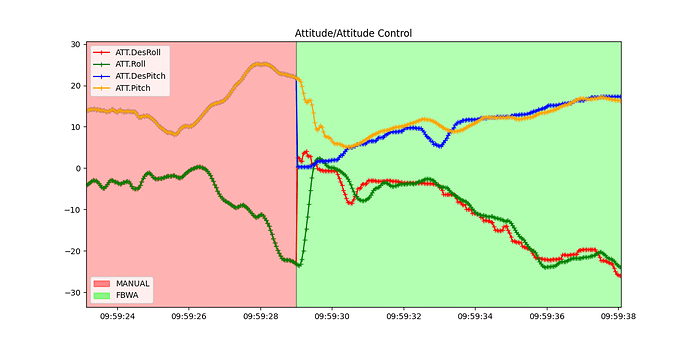 Does this imply that the D term is too high, it overshooting like this on a step function? Not a practical problem, more me trying to understand the system better.

Does this imply that the D term is too high,

Hmm… maybe? I’ve had issues with flying wings that get into a control oscillation that I was able to smooth out by using PTCH_RATE_SMAX. I don’t think your plane needs that right now given it’s only happening in one very specific situation.

How well is the plane set up to fly in manual? If its set up correctly then when you change to fbw no big inputs should be needed. Check where the elev pwm is when flying level at slow speeds, check your c of g,
Also you can takeoff quite well in fbw no need for manual. But i believe for many people who dont have non-stabilised plane experience they put something together which barely flies then expect the flight controller and some autotune to fix it for them (which it almost will) but sooner or later they are uploading a log and asking why it crashed.
To do it right, the plane should be well balanced, not too overloaded, have appropriate control authority and fly straight and level BEFORE you ask the flight controller to do anything for you.

I had flown this plane for almost ten years before I put this flight controller in it.

I tried taking off in FBWA to avoid abrupt transition from manual to attitude control. I still get the waggle on takeoff. How can I tell if cycle detection is kicking in?

There is a lot of pitch oscillation in the moment of takeoff. I would suggest reduce P and D by 30-50%

Thank you @jreise-d and @Allister. I’ve been looking at the logs and at the oscillations, and I think I need to take both your advice. It’s possible that my problem is that the airframe itself is capable of a lot more aggressive maneuvering than tune level 6 supports. If I want this tame an aircraft, I should decrease Ps and Ds and avoid oscillations. But maybe tuning to a higher level would harmonize the tune with the capabilities of the airframe and its control surfaces. I plan to try that next time I’m at the field.

You can try tuning to a higher AUTOTUNE_LEVEL, and if the oscillations appear intermittently then you can reduce the PTCH_RATE_SMAX in steps of 10.

I tuned at level 7 and the oscillations are smaller. Out of curiosity, I’m going to try level 8.