EKF blew up during onboard calibration


Log of me rotating the heli during on-board compass calibration. After a couple of axes, EKF blew up. Clicking yellow EKF text shows 3 of 5 bars filled with red.
With heli back on the bench, MP showed my heli sitting on its side.
Recalibrate accel + reboot doesn’t help.
This is on Cube.
PittRBM (Pitt) April 4, 2017, 7:39am #2

Before calibration, I can throw the board around without problem 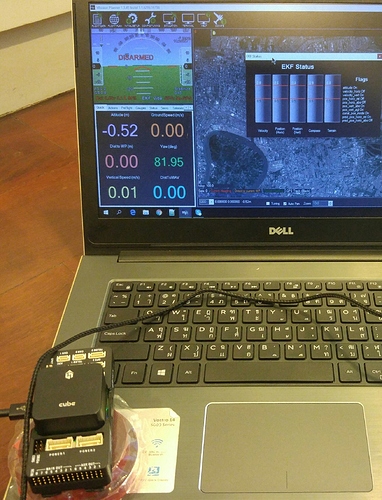 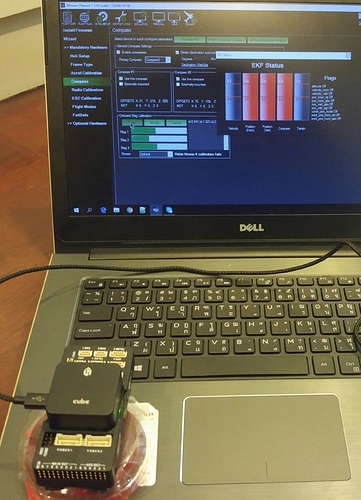 Does the calibration complete successfully? Does it fly well? Do you have any pre-arm check failure? What is exactly the problem you are reporting?

I have never ever looked at the EKF graph while doing a compass calibration, so I don’t know if that usually happens or not, but I’m not exactly surprised with it.

Also please don’t use terms like blew up, you said it yourself that when putting it down the variance levels went down, meaning the EKF was still running perfectly fine - it didn’t blow up!

It had been hovering ok but with occasional Bad AHRS and EKF primary change warning which I believe was due to bad vibration.

Few days ago I had a first chance to fly in open field and after almost crashed, I decide to redo calibrations.
Compass 1&3 calibrations never complete after several attempts until I noticed that it lost its orientation.
Since then, it won’t arm and keep reporting Bad compass health or Compass variance.

What term is commonly used in this case?
Sorry for my bad English, blow up is the only term I saw being used with EKF.

You are confusing me even more. You started a topic about EKF values when doing compass calibration, but now you are talking about a lot of other issues.

I’ve now confirmed that the EKF variance values going up is normal during compass calibration, so that’s a non-issue.

Please redo the calibrations and any needed setup, and, if after that you still have any issue, post it here with a log.

What term is commonly used in this case?

I wouldn’t say there is a commonly used term, you can just say that the EKF variance values went up.