I’m looking for the best way to realize a dynamic way for arduplane to land my plane in case of a failsafe (and still have RTL working on a switch).
Like, assume my Radio breaks, TX or RX fails etc. I dont want it to loiter until the battery dies and crashes but instead find a safe way down.

On a seaplane, which I always fly on the same spot, I set it up like this:
FS_LONG_ACTN=1 (RTL)
RTL_AUTOLAND=1

Then I set up a rally point plus a mission like that: 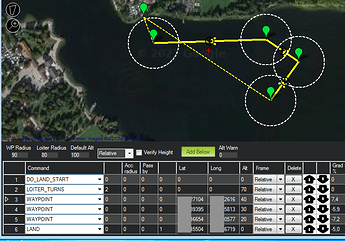 So when hitting RTL switch - or in case of a failsafe - it behaves like that:

Now, this works as desired but only for that one location.

On another plane which I fly on many different spots, how can I set something up like this without having a mission with coordinates? Maybe something like, land in the same direction where it launched?

I tried various things in MissionPlanner but some of mission elements seem to require coordinates or begin to draw waypoints on the map in the middle of the ocean.

Have you tried RTL_AUTOLAND=2? I’ve never used it but it may work for you.

Thanks for your input.
That would still need a do_land mission chapter if I see correctly.
And actually I want it to Return, loiter, then land - but just generic without coordinates.

Yes, it would need a mission plan. Even if it’s just a landing routine. If you fly in the same area all the time then you would only need to load it once.

Hm… a mission is fine, but not if the mission step requires coordinates and bounds it to a specific location as said.

Would a loiter-to-altitude work if I set it to 2m and then turn off motors?
Then RTL + LAND and by using multiple rally points I could set up “safe zones” to do the stunt.

There must be a way to set this up… worst case (for me) would be to build a crash plane and deep dive into missions - which I usually dont need at all.

Would a loiter-to-altitude work if I set it to 2m and then turn off motors?

… I guess it would work. I’m sure you can guess it’s something I’ve never tried.

Your tuning would need to be very well dialled in. Normally I wouldn’t think twice if a plane overshot an altitude change by 2 m, but in this case that could be a big deal.

I tried to set up a mission in various ways but never accomplished repeatable, good landings without waypoints.
Started to look at lua scripts and here I can even land it into wind after slowly loiter down.
Also neat, RTL will only lead to landing if we have a rc failsafe.
Guess thats the best way to achieve what I wanted.