ok, got it, hope thats it

We would like to use normal servos for tilt mechanics. If we set SERVOnn_MIN to 800 and SERVOnn_MAX to 2200 we thus can reach about 120° tiltangle (90° up / 30°down). Can we also use vectored tailsitter functions ? 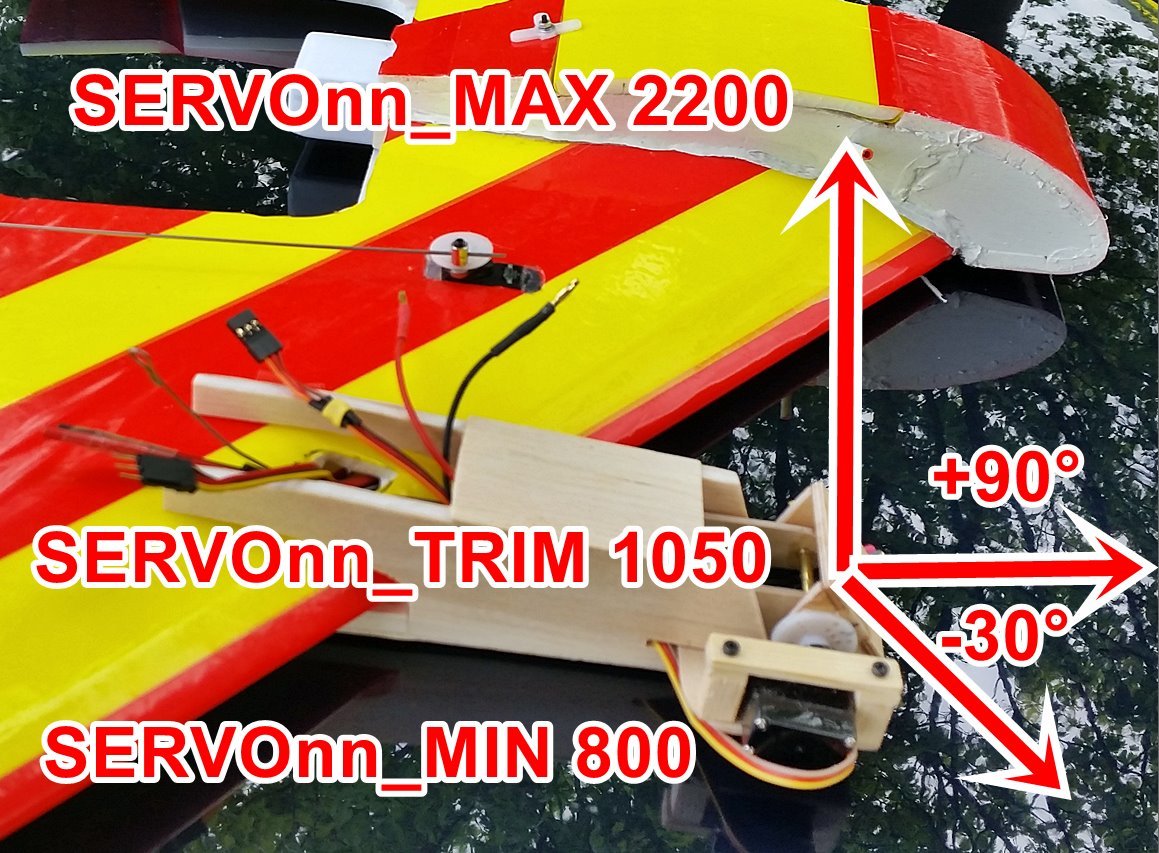 I’ve done a PR to fix this:
The Light looks like: https://www.youtube.com/watch?v=iF4ZGx5QM3A
it should go into master in the next day I expect

Still waiting for the Props from HK

It will work now, but it won’t be optimal, as it will be asymmetric in the throws. I am planning on adding parameters so that the code knows the angles, and can map outputs onto asymmetric throws correctly. That should make setups like these fly better.

Hi, Tridge …just to let you know is been rain here and not so good for the rest of the week ?
and all systems go…

Finally performed good forward and back transitions with the Stryker. KMZ file:

This is what they look like in Google Earth: 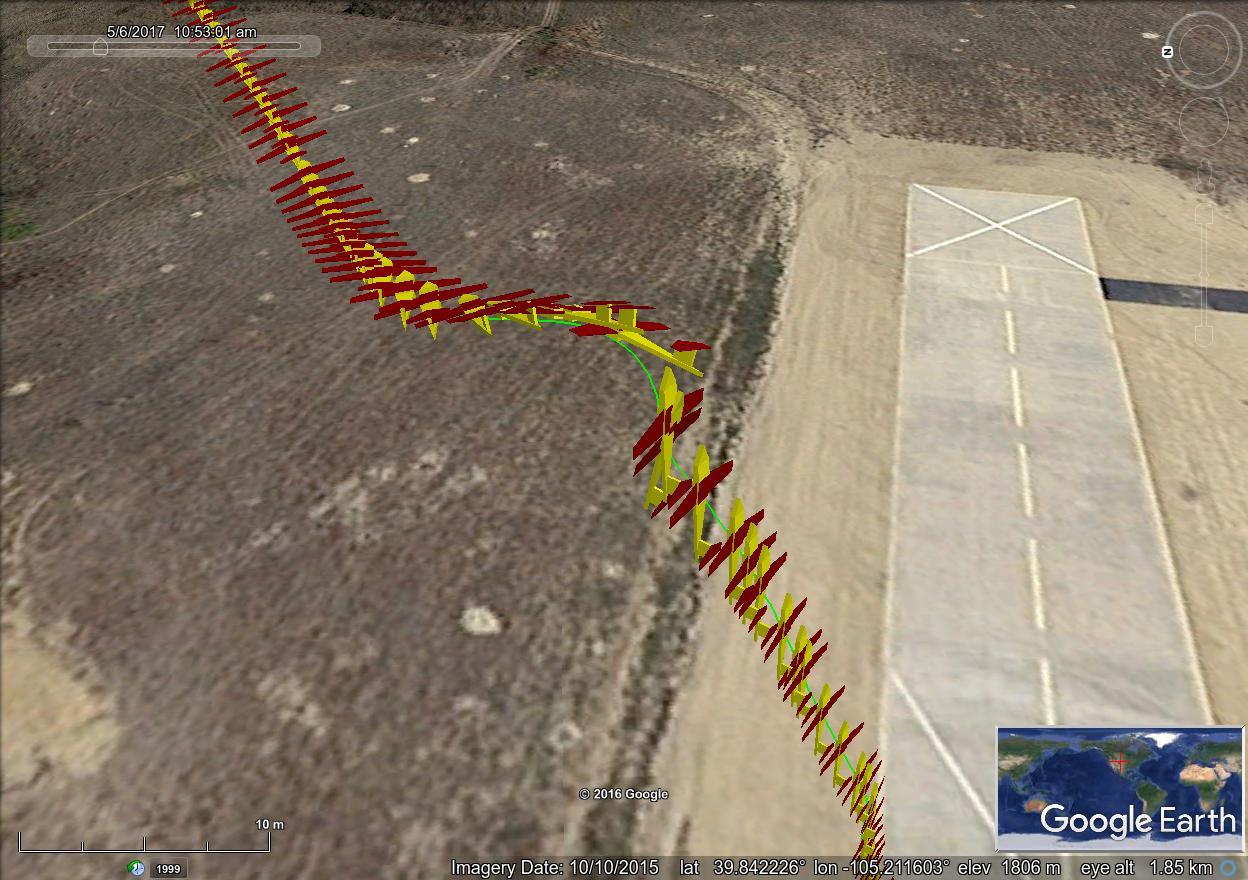 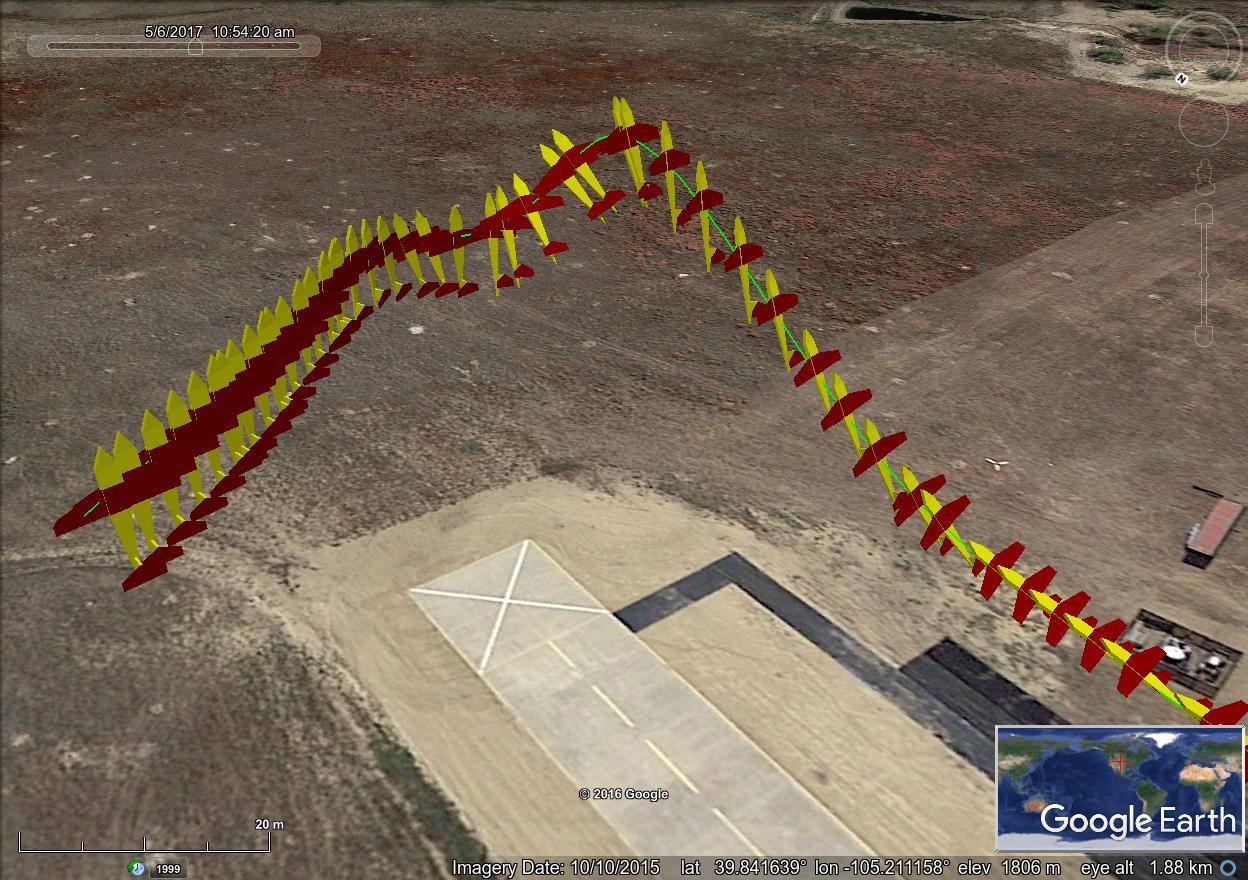 Finally performed good forward and back transitions with the Stryker. This is what they look like in Google Earth:

congratulations!
What did you have setup for RC failsafe?

looks like we’re making progress!
I’d like to get the DF log if possible. Then we can adjust yaw and pitch sensitivity.
Next steps would be QHOVER and QLOITER to check alt-hold and position hold. After that we can start doing transitions to forward fllght.
I’ll be very interested to see what the current draw is like in forward flight. For CanberraUAV OBC2018 we want to create a vectored tailsitter that can fly at 28m/s (56 knots) for an hour. To do that we’ll need a much lower drag setup, probably more like a fast glider wing. We’re thinking we may extend the motor booms out the back to hold an elevator for forward flight, to allow us to use a higher aspect ratio wing.
Cheers, Tridge

Thats exactly the target of my “dream” of the future.
This man has experience in building wings for long endurance.
Here the report of a mission to protect animals in a park.
I don’t know if he speaks English, but if interrested I will contact him for you.
http://www.epp-flugmodelle.ch/download/Zeitung_Artikel_12.7.2014_AZ.pdf

This man has experience in building wings for long endurance.

they don’t look like fast flying wings though. The key difference with what we want to do is we want to fly at between 25m/s and 28m/s with low current draw. That is why we’re looking at fast glider wings.

I’d like to get the DF log if possible. Then we can adjust yaw and pitch sensitivity.

google drive
sent[quote=“tridge, post:355, topic:15302”]
I’ll be very interested to see what the current draw is like in forward flight.
[/quote]new high voltage power module on the way, so it will be in logs, also will logs record a/s with a/s sensor? i’d be suprised if illusion see’s 56 knots

. For CanberraUAV OBC2018 we want to create a vectored tailsitter that can fly at 28m/s (56 knots) for an hour

We’re thinking we may extend the motor booms out the back to hold an elevator for forward flight, to allow us to use a higher aspect ratio wing.
[/quote]
I have one of those in the works, 2m wing, i’l send a pic.i have to put it back together, disassembled to work on

thinking about your project ,efficient cruise motor/motors/lift assist, will most likely be needed.
my long term project… gen.,starter,diesel or gas engine,cruise prop assembly, in a small TVBS
my bigest concern is efficiency and vibration, the rest is easy( need funding .gov ?) 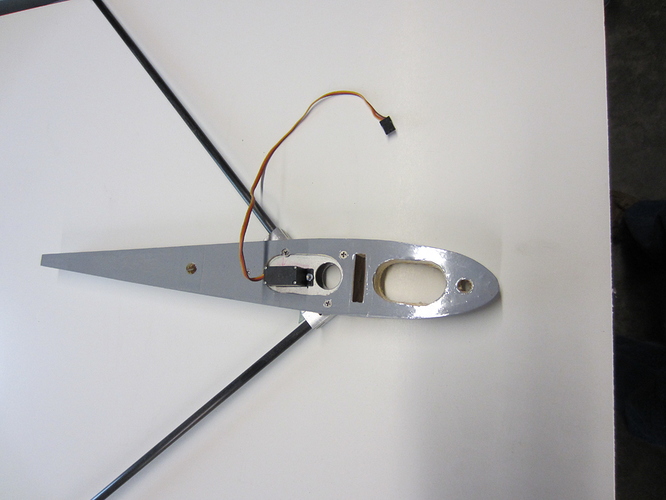 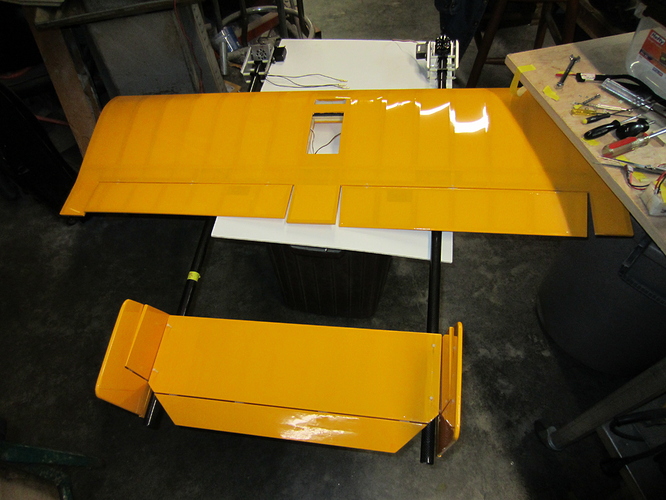 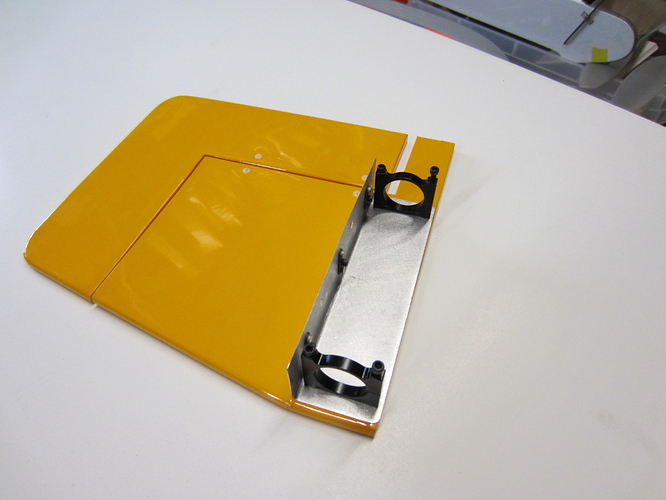 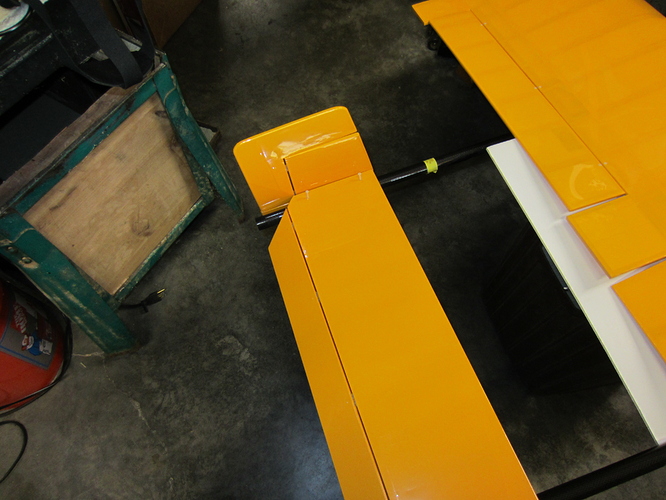 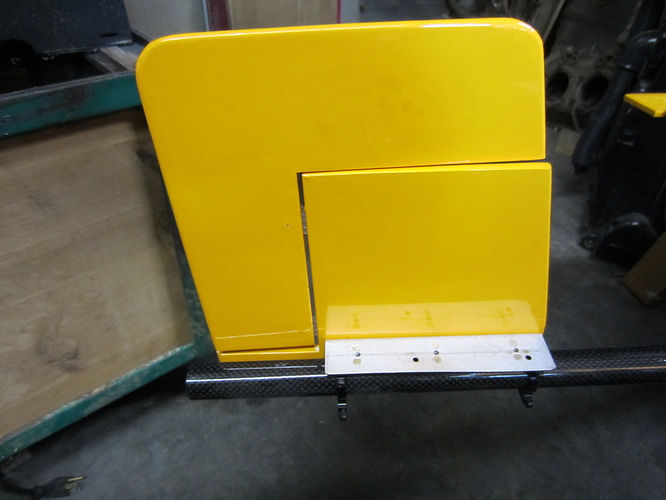 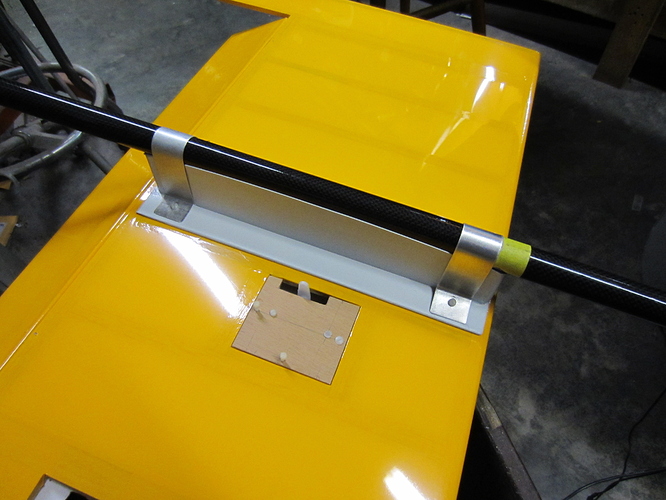 great, the 27.BIN where you did logs of takeoffs and landings was particularly useful.
The tuning is pretty good, but I think you can lower Q_A_RAT_PIT_IMAX. The I buildup is what is causing it to overshoot a bit in pitch on takeoff. I’d start by dropping pitch IMAX to 0.2.
I also noticing that you are guiding the takeoff a bit with the pitch stick. If we get it perfectly tuned then you should be able to just raise the throttle and do nothing else for a perfect takeoff. We’ll need that for automatic takeoff. Next time you fly, can you try some takeoffs without any control except throttle?
For automatic landing we’ll need some extra code to make it lean forward so it ends up on its belly and not on its back. I haven’t started on that yet.
Once you’ve tried QHOVER in flight, it would also be good to try some QHOVER takeoffs, and then some QLOITER takeoffs. That will take us closer to full automation. I think QHOVER takeoffs will work, but probably won’t be as smooth at first as your QSTABILIZE takeoffs. We’ll need to tweak things a bit once I see some logs from initial QHOVER takeoffs.
Then for QLOITER takeoffs I suspect that the attempt to position hold during the takeoff could make it spin around as it catches one corner of the wing. We will probably need some code to make it not try and hold position until it has reached vertical, or reached some minimum height.
Great progress though! I’m really looking forward to seeing it transition!

yep, we’ve been thinking about petrol vectored tailsitters too. We already have code in ardupilot for automatic engine start:
See this example:


right now it can only auto-start one engine, but we could extend it to two. It even restarts the motor in flight if it needs to. We had that happen on an auto mission. The motor stopped (bad fuel supply system), and ArduPilot automatically restarted it and it continued its mission with no operator intervention.
2 Likes
tilt ( research air) May 7, 2017, 11:35pm 363

pretty slick, is there a gen on board? I’d like to see that motor/ starter assmbly if available, and what are you doing about vibration?

pretty slick, is there a gen on board?

there isn’t in this one. We did have a generator in an earlier plane (back in 2012), but we removed it as it really wasn’t helping and was causing some mechanical problems.
For the plane in the above video we were aiming for a bit over 1hr flight and it only needed quite small avionics battery. To change the VTOL motor batteries would have been hard as they are high capacity (8.8Ah of 6S) so it would have taken a lot out of the petrol engine to charge them.

I’d like to see that motor/ starter assmbly if available

we just used a kit for the DLE-35, which is the motor we used. I think this is the one:
http://www.milehighrc.com/EME_E_Start_30_35.html
it wasn’t really reliable actually. Brushed motor, and the brushes failed once, the terminals broke off twice in cold weather with vibration. We just replaced with spares as needed.

and what are you doing about vibration?

there is heaps of room in the porter, and it only flies horizontally, so vib isolation is easy. We used an aluminium plate suspended on small cubes of dubro 1/2" foam, with another layer of foam blocks above that then pixhawk1 above that. Worked fine, but quite bulky. I can send photos if you like, but I wouldn’t say its a great setup. Worked for what we needed.

@tilt btw, can you send some close up photos of the motor tilt servo mechanism you used in the illusion?