Drop/ gain in altitude when yawing

Problem: inexplicable drop/gain in altitude of the hexa while yawing. regardless which way I yaw (right or left) the copter drops in altitude then regains altitude as I turn away.
Tarot X6 with 17" propellers, 6s, AHRS_ORIENTATION: 180deg
Telemetry shows approximately constant altitude as CTUN altitude but both BARO altitude is showing real movement of the copter.
What actually happened can be seen with: AHR2 Alt+Yaw + rcin_c3.
I went thru the logs, but I failed to ID the the problem causing this behavior.
wind:NW 5m/s (15-20kmh)
Time: 11AM
2 logs attached.
Can anyone help me with any ideas?
Many thanks in advance!
Tom
P.S. this is the 24th copter I build/rebuild from scratch (first hexa if not couting y6) and I have never seen anything like this.

copter has AC3.5.1.
I tried to load 3.5.1 on another copter to see if it is version specific, but could not find that version.

No logs attached.I have an X6 that doesn’t do this._

It’ll be a while until I get at the numbers but your PIDs are wildly diffferent to mine (on 3.5.2).Mine was tuned heavy and the numbers have reduced with repeated autotunes but are still mush higher than yours.I’ll grab the parameters later today and post them for discussion.

I can’t see any deviation in the desired yaw and actual yaw but I do see some noise on the Ch 4 input.It doesn’t seem to be associated with throttle movement.

Will be back later.

@Jagger
The problem is not the deviation in the desired yaw and actual yaw but the gain/loss of altitude while yawing
Mode:-PosHold
RCin_3- no change
Altitde change of 10meters directly correlates with yaw direction 359-0, and I have no idea what is the root cause.
(this is from another log made with 3.4.6. previous ones were 3.5.1. so this is not FW issue). 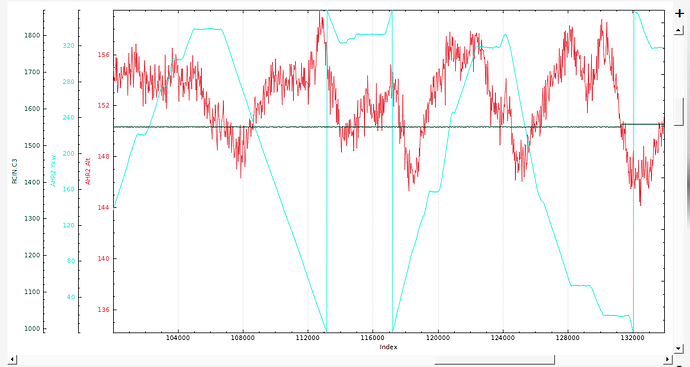 Indeed.But it’s the first thing to check as usually the throttle and yaw are on the same stick and one can interfere with the other.As it checks out there’s somewhere else to look.

I did send a 2.1 back due to a wildly inaccurate barometer (around 9 m fluctuation ).Not heard back from them yet but it drove me nuts (on My Tarot X6 ).Flew so badly I changed to another FC.

I’ve hd a dig around and concur with your findings.I can’t see a cause.The oly thing that stood out for me was the PID difference between our two X6s.I don’t know if low values could cause your uppy downy stuff but your barometer behaviour looks very similar to the one I just sent back.That couldn’t hold altitude very well at all.Stuck a Pixhack in it and it came over all solid.I haven’t heard anything back yet about my unit. 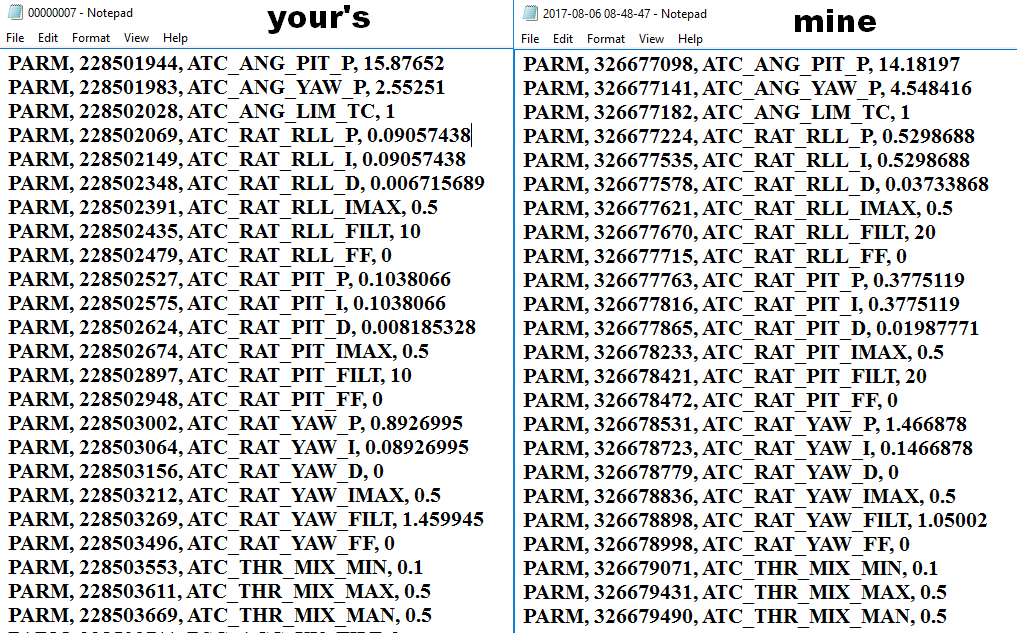 Tamas, it seems that your baro is either defected, or somehow it is disturbed by wind or light. Check that the sponge is in place inside the controller’s housing.
This how the GPS.Alt and BARO.Alt should look like

image.png1882×558 127 KB
The GPS altitude change occurs AFTER the BARO register a sudden change in altitude on the other direction… … This is obviously bogus.

Look at this 1s… it supposedly lost 10 meters in 1sec, it should drop like a stone, and suddenly no more drop…

What kind of controller is it ?

@Jagger
Thanks for looking into it. I was right after the first autotune when I noticed the problem so that is far from done.

@Eosbandi
András, It is a CN Pixhawk bought from Foxtech.
I did notice that the Baro had unusually high oscillation but that alone could not be the cause of it.
I will check the sponge Monday as I am back in Budapest and if that is the problem the beer is on me!
If not, I will throw the FC + GPS out and will put a new one in.
I have eliminated all other possible causes so either of these 2 have to be the problem.

The longer I look at these graphs, the more I convinced that this is indeed a faulty BARO. GPS seems perfect to me. BTW, Don’t throw away, I have an SMD rework station, I can replace the BARO if its faulty.

You have the beer!

I took out the Pixhawk from the copter: the sponge on the BARO was white (semi-transparent casing). Changed it black but the oscillation remained. Only the sun sensitivity went away somewhat.
I am gonna check with Foxtech and see if they change it.
If not I will take you up on your offer.