I just put payload on my quad, it has flown several flights before this with no payload and no issue. I also flew a one issue free flight before this one for 17 min (the entire flight time) with the new payload.

The here2 flashes in some error code in flight, I couldn’t see which colors or sequence it had but I saw a blue and red flash. The drone than starts to descend slowly. Full throttle won’t do anything. It’s forcing me to land on the spot. I still have pitch, roll, and yaw control.

In the log I can see error codes regarding the ekf and a compass error. But I don’t know why it decided to force me to land.

The only changes I did between my good and bad flights was:

And I stole 5v from a CAN port to power a seagull map2 camera trigger via the servo rail. Nothing else is powered by the CAN port and since the map2 draws less current than a here2, I thought I could use the CAN voltage supply.

Maybe someone could take a look at what might be wrong here, Thanks!

The compass stopped providing data (well 4s to do it and it should be 200msec), Position Down Innovations went high and Land Mode triggered from EKF Failsafe. I don’t know what all those “CAN125 Registered Topic for 0X1 0X6” mean but it started logging them at this point. My guess is it means something has gone wrong

hm, this happend two flights in a row. Maybe it’s because I powered the cameratrigger from a can port. I used the power wires and connected them to the servo rail. The only thing that’s taking power from there is the cameratrigger. But maybe it messes with the system to do that.

Edit: When I look at the power tab in log analysis, and the voltage reading from the servo rail, I can see that it drops out two times. Since I use a CAN port to power the servo rail and the camera trigger maybe the voltage drop affects the system. CAN 1 which has the gps and compass probably has the same internal power supply and therefore a voltage drop on CAN 2 also would reflect on CAN 1. This would cause the here 2 to reboot or at least not work correctly. I’ll use an external power supply to power the camera trigger and test fly again tomorrow.

It was a bad CAN cable, or that and something else. When I twisted the cable and pulled a bit on it the here would lose power. So it basically lost the gps and compass.

Should it really go into land mode than? Not alt.hold? The cube has 2 more compasses to use and if I lose the here2 and it just decides to land, that could be dangerous in a real situation/not a test flight. 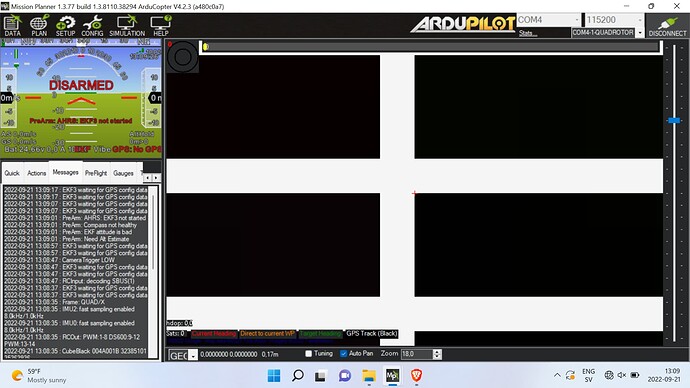 This is a screen of what the cube says when I unplug the here2. It feels like it’s complaining about a bit to much. Like attitude, and altitude. That has nothing with or should be handled without gps and compass.

Should it really go into land mode than? Not alt.hold?

You could argue that either way depending on the flight circumstances. In any case configure it how you want it. Land is default.

okay, but the ekf handles more than position estimate, right? If an IMU would fail, would the cube use one of the other two? Or would something else happen?

EKF is a fusion of sensors. Whatever triggers the FS the configured action will be taken.

ok, so an IMU failure could cause this and alt.hold could be the wrong setting regarding safety?

Btw, the cable was broken, checked with a multimeter. I’ll replace it and it should fix the issue! I hope

ok, so an IMU failure could cause this and alt.hold could be the wrong setting regarding safety?

It could be. It will drift with the wind w/o control action so it depends on the circumstance. I always have it set to Land but that has twice resulted in the craft landing in a tree. Another time in the middle of a very large corn field. All recovered.

I think I’ll set it to alt.hold, I almost never fly far enough so that flying in alt.hold would be an issue. Most of my flying hours are in alt.hold or stabilize anyways.

Yea, that makes sense. All mine were on Auto Missions as I recall.

Should I use EKF3 or EKF2. For a while ago, I got told that I should use EKF2 since 3 was a bit to new and not well tested. Which should I use now? And what’s the difference between them?

Which should I use now?

And what’s the difference between them?

ok, I’ll be using the third one.