170623 – DJI S1000 frame
Heavy lift capable UAS.
DJI S1000 frame / Pixhawk 2.1 Flight controller / Mission planner beta GCS / Firmware 3.5.0.rc7
The incident happened on the 8th test flight of the day after completing seven successful test flights to adjust throttle settings, yaw settings, compass settings in Alt hold, and Loiter mode mode because of an aggressive throttle on take off. Before mishap aircraft was responding normally other than the occasional toilet bowl in Loiter mode.
Preflight arm checks passed, no warnings on GCS screen. Intermittent Gyro Health warning that was self-cleared before arming. Safety switch was turned off, aircraft was armed in Loiter mode which is GPS guided. We had what is referred to as toilet bowling after take off which is a compass variance error in the flight controller. The aircraft was place in Althold mode which disables the GPS and solely relies on the barometer for altitude control. The aircraft responded normally to Althold for approximately three seconds and then aggressively accelerated and departed to the SE at 34 mph un-commanded until ground impact.
At last effort I asked the GCS operator to go to Stabilize mode for pre discussed fly away procedure, but aircraft hit the ground before command could be executed. Also at last ditch effort the aircraft was placed in Return to Launch mode right before impact. Fly away in ALTHOLD MODE?
All commands, flight modes, and observations were validated in the flight controller telemetry log.
can someone review the logs to tell me if they can see anything?

On a first look, at aprox 3 seconds after ALTHOLD a battery failsafe kicked-in. Will have to look a bit further.

Thanks for the report and sorry about the crash. As @LuisVale says, the vehicle switched into RTL but it was not able to control it’s position so it flew off in the wrong direction. It gets up to a whopping 16m/s just before the crash.

There are two issues here:

I’ve asked Paul to have a look at the logs so hopefully we can get to the bottom of this.

Both EKF’s were in heading fusion mode at the time. In this mode magnetometer errors are harder to detect because the 3-axis field measurement is projected into the earth frame and reduced to a single magnetic compass yaw measurement.

The copter hadn’t climbed past the trigger height of 5m which causes it to transition to 3-axis fusion.

As a result the compass innovation test levels never climbed past 1 during the event and therefore the check condition in line 116 of failsafe.cpp was not achieved. 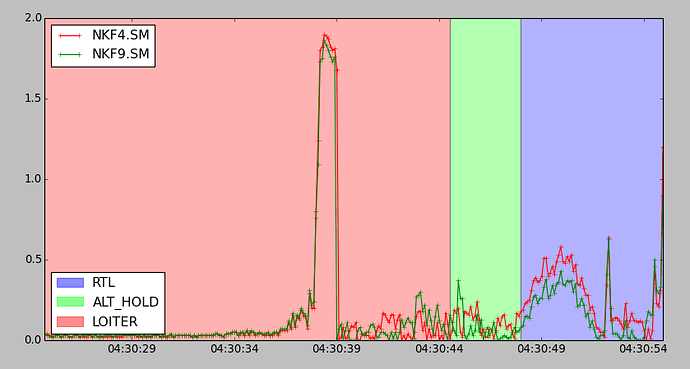 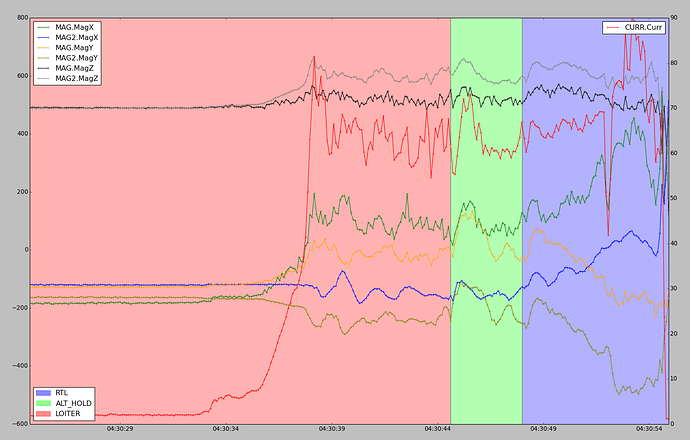 The criteria used in failsafe.cpp needs to be revised because we cannot rely on magnetometer innovations for low altitude operation before the switch to 3-axis fusion, particularly if there is interference rotating the field in earth frame. 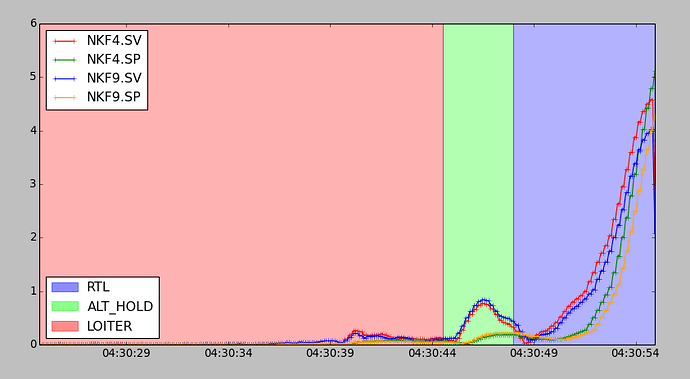 After discussing with Paul, we’ve raised a PR which should help should this happen in the future.

@telestroud, thanks again for the report and sorry for the troubles. If it’s any consolation, hopefully this crash will actually help us close these corner cases and improve overall safety.

This PR is in master now and we’ve included the first part of the fix, “reduce the EKF’s final compass reset from 5m to 2.5m” in AC3.5-rc10 which should appear in the mission planner for beta testing within a few hours.

I didn’t include the ekf variance check because we need more testing to ensure we don’t get too many false positives and we are too close to the AC3.5 release. We could hold up the AC3.5 release but we think this incident could have occurred in AC3.4.6 as well. So we just need to march forward with the AC3.5 release and then get the improve ekf check out with AC3.5.1 as soon as it appears safe.