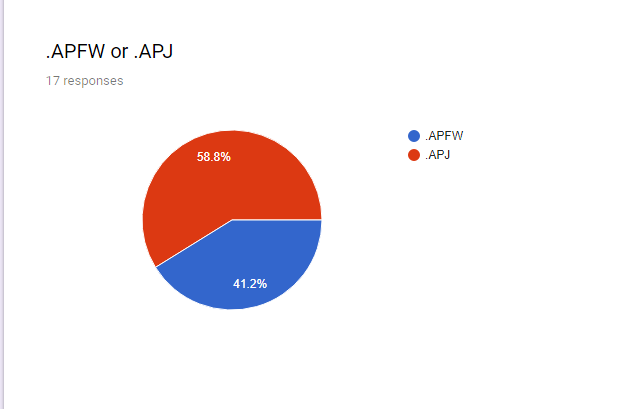 10:02am - firmware name extension and embedding defaults.parm
.apj is the new extension
https://docs.google.com/forms/d/e/1FAIpQLSf9giM7d5qrIpMpKqFqMgMw0jH5FEdqz7hxy1S-F4mUdMO1ug/viewanalytics
By 58%
Tridge is starting to play with editing apj files to be able to insert parameter blocks
Question as to what else we could insert into the reserved space apart from parameters
Tridge is trying to make extra parameters be the last data in the bin file
Last bytes will be final signature
Concatenate parameter to end with a 4-byte length to front
In AP_Param code will declare additional symbol which will be at end of file
Linker tricks
Problems doing this for Linux
Different mechanism for that
Or just use a command-line option…
Will act much like defaults.parm
Doing it this way means no GCS changes required
This is different to the old parameter files as doing a parameter reset gets the correct defaults for the hardware
The parameters will be plain text tacked onto the end of the file
Name-value pairs
You can even have comments in it
Tool will need a max-length
Probably be several kilobytes
It will die with unknown-parameter errors if you include a bad parameter
All parameters start at zero
Then the C++ code sets values from parameter tables
Then these values are applied
No space taken in FRAM
On param reset calibrations will be lost but the tuning still be good
Git hash won’t change
Could add a tag or hash for the parameter file spat out as part of the banner
30 or 40 character string
This will probably replace defaults.parm
(aside) Chibios now runs on SkyViper
(aside) Skyviper is shipping!
Date could be put into banner string
https://github.com/ArduPilot/ardupilot/issues/7057

10:31am - Randy and winch / competition
Randy’s been working on the search/rescue competition
Next week
Probably be missing call
https://www.youtube.com/watch?v=br9hmBOq96k
AP_Winch
Unwind 3m
Unwind at 1m/s
PID controlled
Aux-channel options
Will deliver 3kg to dummy
Lift @30cm/s
(aside) Small bug fixed in Rover
Would momentarily have oscillating i-term causing hairy response
Slow imaging on Pi is an issue
Once per three seconds

10:40am - tridge and collective-pitch quadcopter
Flew it on weekend again
Massive vibration problem was fixed with lead weights
Was getting 7G of vibration
Clipping
http://www.ebay.com.au/itm/25-Gram-Lead-Pb-Stick-On-Wheel-Balance-Weights-With-Norton-Tape-Bag-17Strips/111722682278?ssPageName=STRK%3AMEBIDX%3AIT&_trksid=p2057872.m2749.l2649
Added four of those
Vibration dropped by a factor of 10
18g PixHawk + 100G of lead!
Need to run RPM faster
Limited roll/pitch
Buzz: stiffer foam
Yeah, but these are really easy

10:43am - new GPSs with compasses with ICM20948
Actually part of an IMU
Built into newer devices from Philip
AK0996 on i2c bridge was being detected twice
Dual-path to compass when bridiging enabled

10:46am - Here+ GPSs get weird orientations
HMC5883 90 degrees out
Not sure if it a HW problem or not
Power cycling usually fixes
Can detect it
Self-calibration biases are out-of-whack
Both positive and negative actually give positive biases
Need to write the detection code
Can’t power-cycle it
No facility in GPS/compass combo
Separate “rodeo mode” issue
Probably a control issue
Maybe leash-length change
Should be reproducible in SITL

10:53 - SkyViper sales
Can walk into Target and buy
Look for the ArduPilot logo on the packaging
Very important as previous models didn’t run AP
https://intl.target.com/p/sky-viper-streaming-video-drone-v2450hd/-/A-52136996#lnk=sametab

10:58am - simpleaccel can now in master
FF removed his block

10:59am - policy on PRs
Scaling on dual helis
Transverse and chinook-style
Scaling factor was off by a factor of 5
Tridge wants to change it so it is like normal helis
So we’ll break people’s params in this case
Parameter conversion is overkill here
Small community
Not worth the complexity
Users (all three of them…) will need to multiple scaling factors by 5
These are the PID numbers
Randy will need to backport it to 3.5
It’s in Copter backports

11:03am - one-to-many motor mapping
Tridge to merge once travis passes
Simplified internal structure as all outputs go via srv_channel library
Will fly it on a SkyViper before pushing
Big patch
https://github.com/ArduPilot/ardupilot/pull/6062

11:07am - KDEBUS vs UAVCAN
Eugene / Pavel / Leonard are talking
Tridge: @pavel-kirienko I agree on encouraging them to do UAVCAN, but I also would quite like to see the KDE CAN done, if only to demonstrate the flexibility of what @EShamaev did with our hal.can API

11:08am - CAN servos
Not widely available or widely used, but they do work with Ardupilot
Jani’s looking at manufacturing
Currawong make them but they are expensive
https://www.currawongeng.com/servos-escs/can-servo/
They don’t work with AP (JP)
They say they do in the datasheet (MdB)
Eugene’s are big

11:14am - Dev Call Oct 2, 2017 2300 UTC
Tridge will answer Olly’s question there
Should be discussed on gitter channel
Depends on what sort of DSDL
Whether it is upstreamable or not
E.g. encapsulating uart over can won’t be going upstream
So we just bring that DSDL into the ardupilot git repository as additionally DSDL
http://www.olliw.eu/storm32bgc-wiki/STorM32-ArduPilot

11:21am - https://github.com/ArduPilot/ardupilot/pull/6197
High-rate camera stuff isn’t what we have at the moment
Copying the data in the interrupt handler is probably not going to be a problem - it may be inconsistent but only by a very small amount!
2.5ms is the fastest we ever calculate our position
Could linearly extrapolate
Or go back and reverse-extrapolate

11:31am - file extersnion and marketting
Need to communicate with community about the extension change
Olivier points out the average user doesn’t see the extension
We’ll make all firmwares available via either extension

11:34am - nanf
Correct in SITL
https://github.com/ArduPilot/ardupilot/pull/6643
Tridge says put it in
So does FF
Should also work on Linux

11:37am - fft
Tridge will re-review the PR
https://github.com/ArduPilot/ardupilot/pull/7034
Time subtraction issue
Test it….

11:49am - new APWeb release
No flashing support - that’s next version