So, I’ve been going through my setup again and was doing the swashplate leveling as per Rob’s video. I then noticed that when I went to min/max, it would no longer be level, so after checking that all the mechanical links were as straight and even as could be, I wanted to adjust the servo end points…but it appears that you can’t? 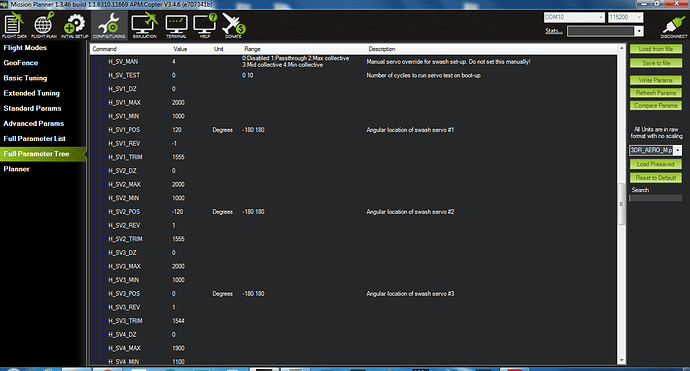 At first, I thought maybe my version was out of the date, so I updated to 3.4.6, but it’s the same there.

Am I missing something? Or is it not important that it’s level at max & min?

It would not be correct to try to achieve a level swash plate at Min and Max, by using servo PWM limiting such as you’re suggesting.

If your servo geometry is correct, the swash should be pretty close to level at Min and Max, if it is trimmed properly at Mid. Most modern helis are set up this way. If yours is not, limiting the servo endpoints won’t help, you’d need to rescale the entire range of movement to achieve linear and even servo output.

How much off level are we talking? If it’s a small amount, I wouldn’t worry about it. The rate controller will sort it out. That is it’s job. Even if you had the most perfect geometry in the world, nothing in Rotary Aero is ever perfect, linear, and even. That’s why we have gyros. That’s a bit of a contentious statement. But it is correct.

How much off level are we talking? If it’s a small amount, I wouldn’t worry about it.

Yep. On my smaller 500 heli where the servo shafts are all in different orientations it’s not quite level at min and max. But it doesn’t make any difference because even flying manually with no gyros, by the time you hit maximum collective range it introduces other dynamics in the heli that is going to require cyclic correction anyway. When you reach that point either something is happening really fast, or the heli is trying to lift something it can’t lift. Whether that cyclic correction required to control it is done by the pilot manually, or by the gyro’s, doesn’t make any difference, and the swashplate is not going to be level anyway.

There is a setting, though, to be aware of. If you are hovering and slam in a bunch of forward cyclic to make a drag run or something and the heli tends to go into a roll, look at the H_PHANG param. It can correct the phase angle of the swashplate if it’s not quite right. Very handy param to use in the fine-tuning of your heli to make it handle really nice. If your heli is one where the swash is not quite level at max and min collective, you may have to use that param. Because the same geometry issue that is causing your swash to not be level on collective can translate to cyclic too.

This is one of the beauties of the ArduPilot system for helicopters. It is so incredibly tuneable to make a heli fly as perfect as one can fly. I just wish there was better documentation on all of it so users could better understand what the settings do.