A recount leading to this is as follows:
1] Set SCR_ENABLE =1 to enable lua scripts
2] Created and added a simple ‘Hello World’ lua script to the MP sitl folder. Confirmed in MAVFtp.
3] Initiated simulation with Multirotor
4] DATA/Messages confirm running of lua
5] Selected ‘Scripting_cmd_stop’ and ‘Do Action’ in DATA/Actions/Do Action while Disarmed 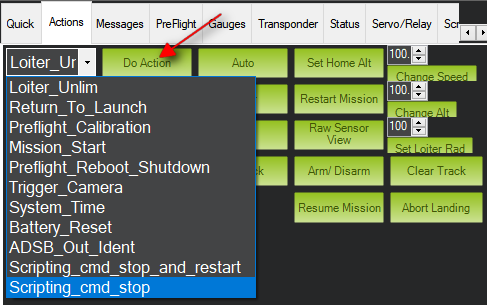 6] Lua script continued to run as seen in Messages

I ran this on two separate Windows 10 PCs with similar behavior. But curiously, this morning on boot up (both PCs and myself

) the command worked with PC#1, but on PC#2 it still did not. I then rebooted PC#1 and again could not stop scripting.