The guys at Cubepilot have made up this document showing many of the options and hardware that is compatible with the Cube. 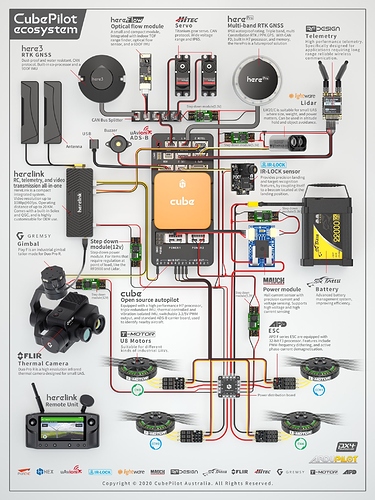 A vendor actually put a wiring diagram together???

How about step by step, programming instructions for cube black and Orange, especially setting up Here 2 GPS in CAN mode and other tricky subjects…

I actually have a series of videos on this starting to go live this week. The plan is a full build series on Ardupilot a while it is using the Cube it’s very relevant to all controllers using Ardupilot as that goal is to try and explain the overall setup and some of the things like multiple compasses abs mags ect.

They will be going live today.

Absolutely spot on,there is so much now,most I get my head around but this will help so many,thank you I for one will be tuned in and look forward to many more from you.

That would be great. One thing that seriously lacks in most training videos I have seen by others is verbally describing wiring and pinning assignments. That really drives me little nuts

Connectivity Diagrams are a must.

Also, where someone can source the special cables from. Links to documentations, firmware etc.

Most stuff is plug and pay now and with everything moving over to JST-GH for the most part things are much better as very little actual wiring is needed.

Pretty much none of the GPS, Compsses ect need specific wiring now.

I have explained motor order wiring and some tips on that but with regards to GPS and compass that’s just the plug and play.

Wonder when majority of what is in pic will not be sold as beta or it’ll be avail.

I spoke to the Orange cube R&D guy in China. He is saying Orange Cube with Beta sticker is fine.

The reason they have beta sticker is due to Ardupilot didn’t have the code ready for the Orange cube when the products were manufactured.

This is MQ, the quality officer of Hex Technology. May I know what is your concern with using the Cube Orange? I would really like to hear our customers’ comment on our product so we can continuously improve it. The cube orange may need updating the driver and ground station software to work, because it is relatively new with the latest processor, but in terms of hardware we can ensure you the same level of quality and reliability as cube black, if not more.

Yes Philip confirmed this at release of 4.0.

The sicker was simply as it was all still in testing at that time.

Hardware may ship with a beta sticks however since Copter,Plane and Rover 4.0 that is no longer correct.

Here 3 is brand new and not even in the wild yet.

Herelink will be coming out of Beta VERY soon, the current release is basically deemed as stable they just want to make sure nothing unforeseen pops up.

I’m not sure what the score with HerePro as of today.

There is actually a good point to your comment that warrants some explanation.

The reason you see more in Beta with Cubepilot than anyone else is they go well beyond what I have seen anyone else do to ensure the stability of the hardware. They also don’t just release a new controller and say it’s fine until they know the software is good too. That may mean things staying labeled as beta longer than your used to seeing however this is more about clarity than anything else.

There is tons of hardware releases in this industry that’s far from stable from A hardware and software point of view and users are often left with issues and problems out the box with no where to turn.

If more declared their hardware in beta for longer periods everyone would benefit and people would have more information upfront.

Fact remain that they go public with an “Ecosystem” that, in good part, is pure vaporware at the moment

Will consider it, once they release everything they announce and stop labelling beta for years