I’m bench testing a new Copter build with a black Cube in a mini carrier, powered by an ACSP7 power module from mRobotics.

Everything is working fine as far as I can tell, but there’s a solid amber light on at the left rear corner of the Cube. This only happens when powered from a LiPo, not when just powered from USB. Board voltage is reported as 5.23V.

What does this mean? Thank you.

Good day, Amber light mean low battery, fail safe and rtl, just check how do you have calibrate the battery.

Thank you for replying. That is useful information.

Do you happen to know whether for all three situations you list (low power, FS, and RTL), is the LED under software control? IE ArduPilot senses the condition and lights the LED. Or is the low power indicator handled in the Cube hardware?

It would be great if someone could point me at the place in the code (Copter ChiBIOS) that handles the LEDs.

This is the nearest I can find:

The LED’s are in the notify library, and there are some board activity LEDs that are also in bootloader.
The activity LED’s are NOT THE SAME as PX4 (that said on a Cube they might be, but there’s no guarantee).

Thanks for the pointer. It’s an amber light on the Cube I’m trying to track down, not a multicolor LED on the I2C bus.

Have you looked here… Maybe of some use for you.

Ok. Sounds like the IOMCU is in an error state.
Have you tried reloading firmware?
If so, which firmware are you using: from a gcs, or your own compile?

I will try reloading firmware tomorrow - that sounds like the right next step.

Thank you for your help. It’s really hard to find documentation on these Cube LEDs.

Pic of the LED: 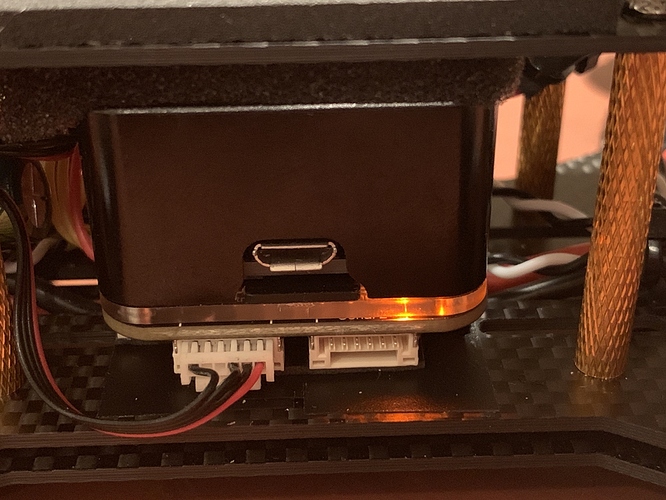 Ok. That’s a boot error if solid, or needs to be setup/calibrated if flashing. Reflash with a clean firmware, as it doesn’t hurt anything and removes an unknown
If it’s still happening on battery but not USB I’d say you have a power supply problem. Perhaps switch to the other power input and see if it makes a difference, or use a different 5v supply.

The other thing to check is that the cube is properly mated to the carrier.

This isn’t hard to reproduce - my Cube does the same thing.

@james_pattison this is a ChibiOS specific bug, it doesn’t occur under PX4. With my custom carrier it’s worth noting that it only happens when the aircraft is powered via batteries and doesn’t happen when USB only.

@WickedShell that’s exactly what I’m seeing on the Cube mini carrier - LED on solid when on battery power, not on USB.

Does this affect flight? As far as I can tell from bench testing, everything is working.

Why you want change the parameters of the led lights?
Did you already try to set again the params of your battery monitor

@Anthony_Short I’ve done a couple of flights with it (and ~10 hours of ground runs) without any problems, but it is a bit disturbing since it should not be illuminated…

@Dave84 it’s unassociated with the batt monitor parameters as the same params on PX4 suppress the LED.

in my opinion better don’t change the parameters of the led.