I have been using the CUAV Pixhack v3 for a little over a year and I really like it. A while back I came across their new Telemetry modules/data radios on FoxtechFPV:

I’ve had great success using the SiK radios and the RFD900 units, absolutely no problems. The last time I tried using XBees on a Pixhawk I was unsuccessful even though the radios were binding. I’d also noticed a lot of people having issues with the XBees

Would anyone here have any idea if the CUAV units are any good or should I just stick to RFD900?

So from what I understand so far is that the firmwares for the XBees are the problem? So I should be better off sticking to the SiK radios which were built to be compatible with the Ardupilot ecosystem?

Or could I give the CUAV radios a shot?

SiK and RFD radios have a specific mode for MavLink, they report radio link information back to the GCS via Mavlink and provide information to ground and aerial units to make intelligent bandwidth control possible. The others are just generic data radios, they will work, but just as a dumb transmission channel.

Purchased the CUAV radio from foxtech. I’m using a Pixhawk 2.1 and was under the impression this would be a simple plug and play installation. Not the case for me so far. I can’t seem to get the radio to talk to Mission Planner. Actually I’m not even sure the Pixhawk is communicating with it either. Anyone have experience with the CUAV P9 telemetry radio and Pixhawk 2.1? Any help would be much appreciated.

They are great radios - very fast, exceptional range (I’ve tested them out to 20km), compatible with MavLink2.

Thanks for the reply. Looks like I pulled the trigger too early on the CUAV radios. I should have done a little more research before I bought them. Guess I have a few P900’s for sale if anyone is looking.

I have the RFD 900 on order now. Looks like it will work with Pixhawk…

They should work fine with a Pixhawk like any other telemetry radio. They just have a power, ground, tx and rx wire going to them, and optional rx and tx flow control wires. I’ve used the CUAV PW-Link WiFi radios with Pixhawk and they work fine. So the P9’s will also work.

I typically use the ground unit hooked to a small battery pack like this, since the USB port on the average laptop or tablet does not provide enough power to run them. I use a WTR24 WiFi dongle connected to the P9 ground radio and connect to the WiFi instead of using direct connection. This does not work with Windows and Mission Planner. Mission Planner hangs on the WiFi connection. It works fine with QGroundControl on anything. 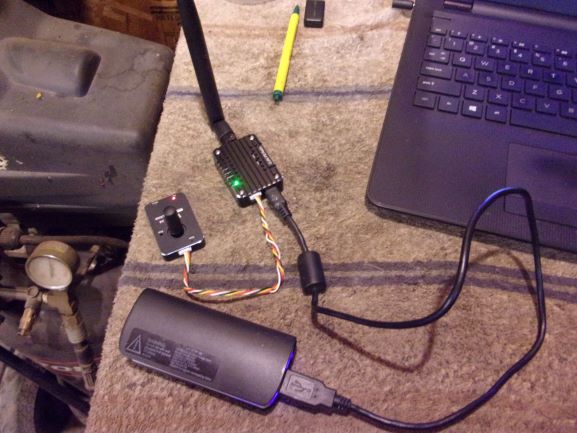 I’ve also used the RFD900’s and IMO the P9’s are much better radios. They produce a tighter signal with no spurs or harmonics, and are MFSK modulated so have a more robust link with better s/n ratio and less dropped packets at fringe reception. You can make any settings in them with a serial terminal using standard AT commands.

I need it to work with mission planner on windows. That seems to be my show stopper.

Yeah, I have to play with that when I get time. I think it’s a problem in MP’s default SR settings vs the data rate of the P9 radio. The P9 radio runs at USB speed over the air. And MP doesn’t seem to like that so it hangs.

Any news on the P9 Radio system with Mission Planner?

I have been using the CUAV Xtend-XTP9B, but have been having constant problems with establishing connection.
It sounds like you had good experiences with the P9, but would like to know if it works with Mission Planner on Windows at this time.

Alternatively, is it feasible to change the air data rate, if that seems to be the issue?

Alternatively, is it feasible to change the air data rate, if that seems to be the issue?

Thanks for the feedback.

So it sounds like the P9s are still out in general, but if I ever have a system using Linux or QGC, I’ll try them out.

I’m curious if just using the raw UART and an RS232 native port would change anything (if perhaps the USB to UART driver is to blame) . . . but I’m not betting $376 on that slim chance.

QGC runs fine on Windows too.

I think it has something to do with how MP handles Windows “com ports”. In QGC this seems to be automatic. Somehow, Windows, Linux or Android, QGC detects the serial port and that there’s a modem radio on it and it connects to an active link without having to do anything. MP doesn’t. Even on a UDP link if MP disconnects it won’t sometimes even connect again manually without restarting the program. Again, QGC just reconnects like nothing happened.

With a WTR24 WiFi dongle on CUAV P9’s I’ve demonstrated before that I can connect to that WiFi network it creates with several Android or Linux copies of QGC simultaneously. Or even with Windows with QGC. But connect to it with Mission Planner and it will instantly drop all the links to the other ground stations and Mission Planner locks up.

Don’t know enough about it to say WHAT causes it. Only observation on what I’ve seen it do.