Crash due to overshoot 10kg Octocopter

We developped an octocopter of around 10kg take-off weight and we now face a big issue for the second time : a crash of the copter occures due to a massive overshoot on roll (first crash) and Pitch (second crash).

This drone was developped 7 years ago and never faced this issue before. First problems started on April.

1st crash happened at around the 7th min flight time during a loiter evolution. No payload on the drone. Suddenly the drone had an over reaction on the roll axis that led to a crash. (find logs attached). Pids were default (Roll/Pitch P: 0,135 and Yaw : 0,180 etc) and ATC_RAT_RLL_FLTT, ATC_RAT_RLL_FLTD, ATC_RAT_PIT_FLTT, ATC_RAT_PIT_FLTD were set to default 20kHz. The drone flew quite well before the crash.
When I looked the logs I noticed vibration when graphing clip 0, clip 1 etc, but don’t think that it could cause such a reaction. The pixhawk was mounted on foam furnished with the pixhawk set. But then second crash is more interesting.

2nd crash happened on the 4th flight. First flight was around 15min without payload. Pids were default and ATC filters set to 10kHz as it is recommended for large copters. Pixhawk has been attached using screws on the frame, resulting less vibration as shown on the logs. On the 2nd flight we added a gremsy S1 gimbal with A7R camera. The drone flew well but wasn’t compensating enough so we decided to increment Pids to finally reach : 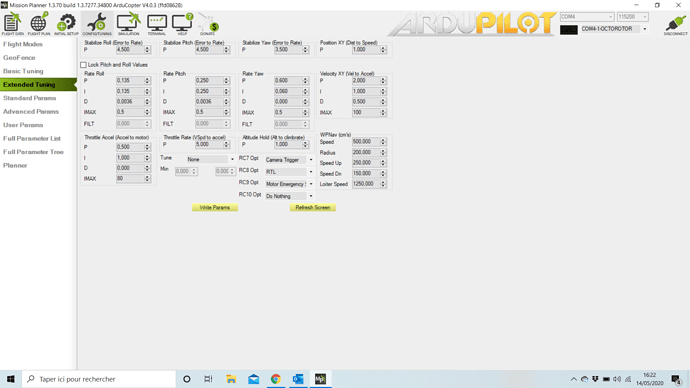 The drone had really better Yaw compensation. Then I tried to give orders on roll to test reactivity and compensation. Results were satisfaying, until I tried on the Pitch axis. Immediatly it over reacted and crashed. See video attached : https://www.youtube.com/watch?v=xuQxxJfLcJY&feature=youtu.be&fbclid=IwAR3omAldzNdqa3YnVYzDKIreXaDhR5YDvbAy4O_5vwpJhPhFiyGE3XmrqvA

I was in Althold mode.

When I graph DesRoll and Roll in logs the overshoot is really visible but we can’t understand this reaction. Any ideas ?

Pictures of the machine

You had a severe battery sag during the event that caused the 1st crash but I don’t know if it’s a cause or an effect because the current draw spiked >100A as the motor outputs were driven high/low. The 2nd crash log doesn’t show as severe of a voltage drop so I suppose it’s just an effect of large current draw. However 2 of those batteries should be able to provide plenty more current than that so not sure.

Your “D” gains are WAY too low relative to your P. This very likely caused this.
ATC_RAT_RLL_D
ATC_RAT_PIT_D

Thanks Dave for your analyze. I am not sure that the battery can be involved in the crash as they are new , from a good manufacturer and that the logs don’t show a voltage or current draw before the crash (2nd crash). Also, I am not sure that the drone would have reacted the same if a voltage draw happened in flight. It might have lost altitude quickly but not done such a reaction ?

Chris thanks for your reply. Isn’t it the opposite to do in such a reaction ? To lower the D terms, because if I well remember, they are often a cause of overshoot issues ?

Also I remember now that we had a similar crash in february trying to set the pids using autotune with the same machine. I always used autotune to tune these octocopters and never had any issue before this very 1st crash , starting with default Pids. Crash resulted of an overshoot on Roll. Same as in the video.