After about 15 flights, my Sonicmodell Binary decided to crash!

While flying in the FBWA mode, he entered in a death spiral… I’ve tried to recover the control switching to MANUAL mode… In the first few seconds after switching to manual mode, it looked like I would take control of the plane again, but right after that it went into a death spiral again and I couldn’t get it back!

In the fall, the plane was wrapped around the top of an eucalyptus and I only managed to get it out the next day with a quadcopter… At home with the plane in hands, I didn’t find any loose / broken links … I tested all the servos for 2 hours and I didn’t have any problems either … I tested all the Matek F405-Wing BECs and I didn’t find anything wrong either… The battery and FC was still stuck in the correct position…

Could someone help me with the log files, please?

Thank you all for your help!

IMO, it seems you reach stall speed and tail heavy 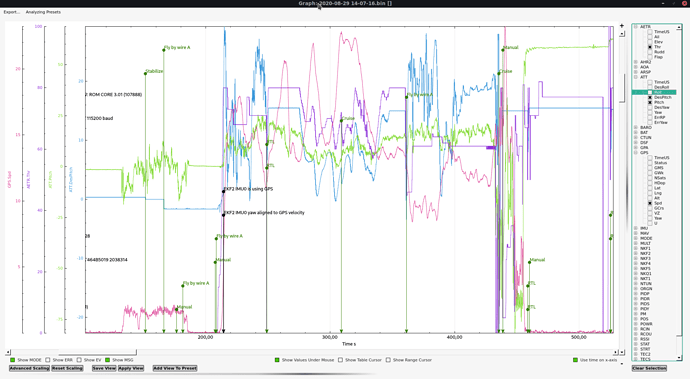 Sylvain
what is the application you are using to analyze ?

It’s just apm planner which I use just for analysis. Fast and better than others in Linux bit you could do the same with mission planner (I personally hate this ugly one) or plot.dronee.aero or https://plot.ardupilot.org/

Thank you very much for the analysis

But I was at 54 km / h (GS) when the plane started to roll … And seconds before the crash, I reached 30 km / h without any stall… After being recovered, I checked the position of the battery and it hadn’t moved … So I don’t see any reason to have tail heavy after takeoff

I can’t understand why it happened

Without seeing the logs, your video gives the impression of a plane that is ultra sensitive in the roll axis. Way before the stall, it was responding to commands in a jerky manner. So your control throw angles were extreme in relation with the static margin of the aircraft (distance between the cg and aerodynamic center). In other words your aircraft was tail heavy, therefore aileron response was too sensitive. The airplane certainly flies more efficiently with the cg to the back but it is just too close to being unstable. With gentle commands on the ailerons you can maintain a stable flight, but if your commands become extreme (because you just entered a gentle stall), you can foul the smooth airflow over the wing further and eventually stall it fully. I believe this is what happened.

Can an Aft C.G also affect the roll rate? I knew that the position of the C.G affect the longitudinal stability of the plane. Within its limits it affects the authority of the elevator control, with an Aft C.G it has more authority with a twitchier response and opposite with a forward C.G. But I didn’t know that it also could affect the ailerons response.

It is common knowledge in RC modeling community that a tail heavy aircraft will stall by first dropping a wing and then possibly entering a death spiral. Besides pitch sensitive, why it also becomes roll sensitive is difficult to rationalize but my theory is the following: When aircraft is tail heavy it flies at a relatively high angle of attack close to stalling. As the wings are generating high lift the aircraft has to also fly slowly to maintain steady altitude. So you end up with wings that are even more prone to stalling - the airflow is slower in a high adverse pressure condition. So any small perturbation including aileron inputs is likely to disrupt the flow over the wing surface and cause it to loose lift. Effectively, the aircraft becomes highly roll sensitive.

Note that stall often doesn’t occur symmetrically, it often starts on one side of the wing (often the tip) which drops and puts the aircraft into a spiral. In a sense pitch and roll stability are weakly coupled because we are not in a perfectly symmetric world. The best reaction is to first apply opposite aileron gently to stop the roll and then gently pull up. I say gently because you don’t want your control inputs to prevent the flow from attaching because they are way too dramatic. Also never apply up elevator in a rolling spin condition as it will augment it. First, stop the roll, then pull up.

Here is a video from FlightTest that is worth watching:

As you increase the angle of attack the center of pressure moves forward (while the CG remains where it is).This generates a (dynamically instable) pitch-up torque. On a tail-heavy aircraft, the tail wing can no longer compensate for the increasing pitch-up moment. The world is not symmetrical (gusts, ailerons). If this instability occurs first on one side, the sudden rolling effect will occur.