Hi, I had a crash today. Attached is the log file and a screenshot of the flight data.

Annotation 2020-06-16 1205191704×585 199 KB
The only reason I can come up with is that the battery was loose and it slid backward causing the PIDP.I to gradually increase.
It first happened within RTL and the plane lost altitude and the PIDP.I increased to compensate for the effect or the battery slid back to its place in extreme front of the plane. The second time it again happened in RTL but this time it was unable to recover.

I need confirmation whether my reasoning is correct or not?

Reasoning seems to be incorrect. PIDP.I should increase for a nose heavy plane. That could not be the case due to the fact that the battery was in the maximum front position and if the battery had moved, the pidp.i should have decreased.

I have however observed that pitch was decreasing even with the desired and output pitch calling for increase. Does that indicate loss of a V-tail control surface?

The situation is really confusing.

What could be the cause of increasing PIDP.I? autopilot being unable to achieve the desired pitch?

Another theory could be that the plane weighed almost 6kg. and due to the airspeed decreasing to almost 11 m/s. the aircraft tried to regain speed by increasing throttle but could not recover from stall caused by going into headwind during RTL.

Seems to me the low fbw speed was the main culprit behind the stall. This guy had a similar problem. TBS Caipirinha with Pixhawk stalls in Auto or RTL mode
I have checked his logs, however his pidp.i shoots up and comes back. Mine kept increasing. Confusing. 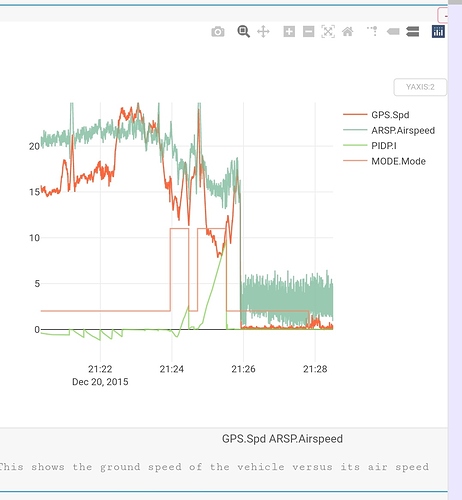 Can someone kindly confirm any of the scenarios above or otherwise?

Apparently, The slow speed stall is the best explanation for the crash. References being:

Hi Jono, I’ve had an initial look at the log and I can’t see any sensor or attitude estimation failure. It really looks like it was a normal stall of the right wing. The target airspeed in auto was 12m/s and the battery config is setup for 8Ah of battery. Are you sure that 12m/s is enough for that much battery in the Twin Dream while turning? Cheers, Tridge

ARSPD_FBW_MIN = 9 is too slow for this frame ! 12-13 should be minimum depending on AUW and of course higher if it’s heavy. If you want to fly as low as TRIM_ARSPD_CM = 1200 decrease LIM_ROLL_CD. For mapping purpose, it’s interesting to set MIN_GNDSPD_CM in case of wind. During this mission you’ve got 10m/s wind sometimes. (We had this frame and found that on calm day it’s a beauty but with wind more than 10m/s what a nightmare …)

The AUTO flight mode brought my plane down

I’m no expert, and I just had a look at the .bin, but at the moment of going into auto there is a large DesPitch spike, and from there the DesPitch and Pitch go their separate ways. I am leaning more to a mechanical failure or a stall, and as the control surfaces don’t max out, more likely a stall. If you study your RCout at the time of going into Auto, you can see the surfaces trying to compensate but not achieving the desired goal. What was the air frame? What flight speed did you have set…

I apologize for piling on the posts. Maybe able to helps someone else.