Hi.
Could somebody help me analyze my plane log. This was the third time I flew this plane and the first two flight where mostly trimming and finding a good CG, but I succesfully made one circle in loiter mode, and some 50 meters in fbwa mode. Today after I switched to Loiter the plane started to turn right, added throttle and never stopped turning right, so when it was about 90 degrees I switched to manual but couldn’t save it and crashed nose down into the ground.
I’m not an expert it logs. All I could find is maybe in ATT.Roll and ATT.DesRoll. In the graph looks like the DesRoll stopped at 50, but Roll went to 150. Odd.

Aruplane 3.9.3 on pixhawk.
Upload to forum didn’t work, link to the log:
https://drive.google.com/file/d/1YvL3MZd9weTwbdsk8RlFjMiwsdbH19zL/view?usp=sharing

I guess that except in manual mode the ailerons are moving into wrong direction. See http://ardupilot.org/plane/docs/starting-up-and-calibrating-arduplane.html#check-servo-movements about #1 cause of crashes .

Really? But I made a flight before that and it worked.
I didn’t check pre-flight in fbwa mode for this flight. I still don’t understand why it would change between flights. Actually the only change I made was to loiter radius from 60 to 40 meters.

I now started thinking that it’s possible that I accidentally hit the reverse checkbox in Mission planner because I was thinking on trimming the elevator from there but then decided to not to. It’s possible that I didn’t see that I clicked on it because of the sun shining on the laptop.

Oh, Rolf forgot to thank you. I will check when I hotglue the plane together. Thanks!

On a side note. Mission planner should have a Save button on the servo page, that way it wouldn’t be possible to accidentally reverse servos just with one click.

I managed to extract the good flight params by updating mission planner. Everything was ok, the aileron was already reversed in the first flight when everything worked.

I made a diff of all the params that changed between a good flight and bad flight:

I can’t understand why this happened. Of course it was my fault with the preflight check.

Take a look at X-axis qyro and aileron servo output: 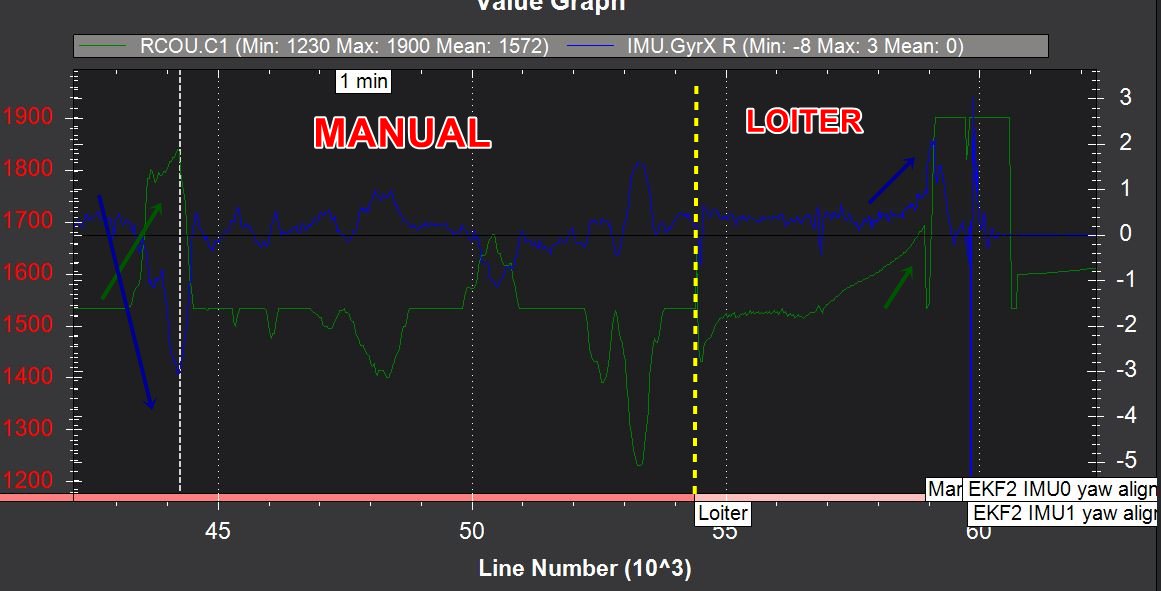 The gyro reacts to aileron movement in manual mode and loiter mode in opposite directions.

Thanks. But from what I see the gyro didn’t even react, it went more or less a straight line. Could be the gyro at fault? The previous flight went ok like I said. 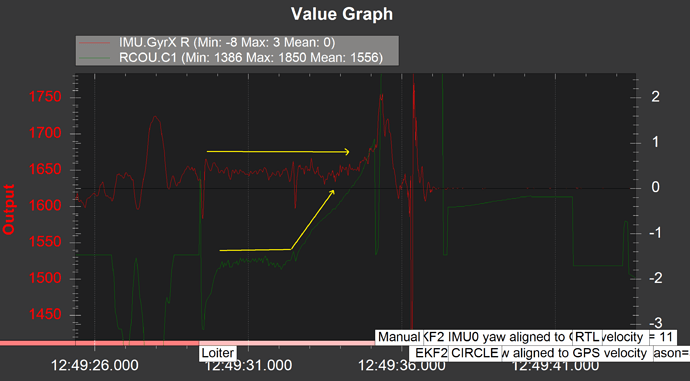 Just wanted to update that I probably found out the cause of the crash. It was probably a combination of the plane pitching down a little when giving full throttle and not having set enough climb rate in auto modes. When I set loiter to only 40m the plane would go full throttle and full climb, but that wasn’t enought to keep the height. The full throttle picthing down mad things worse, probably because of a bad motor mount angle.