It would be very good if the route mapping pattern was added to the qgc software. As far as I know, it’s now possible by mavinci and sensefly ebee drone. I think that coding is not very complicated.

Is that what you are talking about? If so, not trivial to add but also not hard.

yes , it is right. percent of overlap and sidelap can be select .

Map Pilot, used by MapsMadeEasy, has just added this feature as well. They call it ‘linear’ maps. It works as you describe and can be very useful.

I don’t know if it does what we want… but it seems so!

Let’s ask Michael Oborne about it (I have also open a issue on Github: https://github.com/ArduPilot/MissionPlanner/issues/1648)

Yes you’re right, there is in MP beta this functionnality : watch picture attached 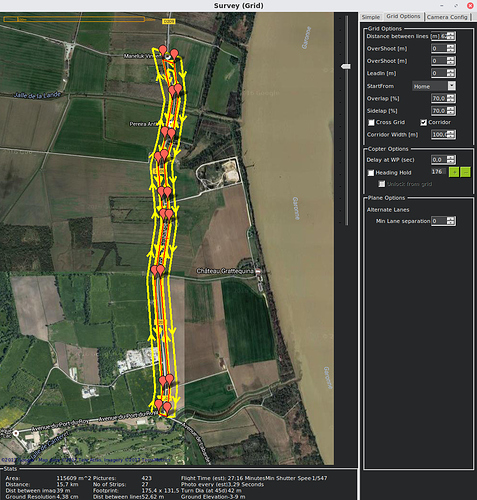 Yes seems to be good ! Need to test it now … but could be better under QGC

Do you know if QGC is able to inject GNSS position (RTK), as MISSION PLANNER do?

Yes ! But only with some gps.
Watch here : https://docs.px4.io/en/advanced_features/rtk-gps.html

Very good!!! The only problem is that I have a EMLID REACH… So I have to use the MISSION PLANNER…

you can use EMLID REACH in ppk

or ask here : https://community.emlid.com/t/px4-reach-integration/6277
I would suggest ppk also. But I think fabio want to use for navigation …

or you can inject RTCM using mavproxy and still use QGC.
I have a PR for Mavproxy that adds support for EMLID

Where is your PR Lucas ?

Currently I only have one open pull request on MavProxy:

What is the status on this request, I see that Mission Planner has it in it’s latest update, but would be nice if QGC can do the same.

Corridor Scan has been in QGC daily builds for a while now.

Creating a safety parameter for a shoreline, then being able to create a corridor with custom intervals and custom total width would be a great tool for Rover (boat / sonar survey) purposes.