Do you know this?

looks like a pixhawk in the background, i would guess there running PX4. Quite unimpressive transitions.

Motors and control surfaces respective position suggest the copter yaw is only controlled by differential thrust. This assumption is confirmed because motors are tilted. Motors rotation direction are opposite to arducopter quad X layout, it means motors tilting should be opposite (inside vs outside) with copter tailsitter. frame type=1

Yes, I think also.
It seems the Axis of the upper and lower mots are not parallel. Can this improof the stability in Hover Mode like the V of Plane Wings?
DJI used this also for the larger drones.

‘dihedral’ that is the motor pointing towards the centre of the aircraft does not help, just reduced the moment arm of the motors.

Pointing the motors at 90 deg to the cg can help with yaw authority, the motor must point such that the torque and vectored thrust act in the same direction.

Actually, tilting the motors “inward” for the standard quad-x layout, greatly improves yaw authority for the BiWing model in RF8. I tried 5 degrees of downthrust on the top wing and 5 degrees of upthrust on the bottom wing. This adds a yaw moment (body-frame roll) for each motor which is in the same direction as motor torque.
It looks like the Quantix has the motors tilted outward, and in that case you would need a quad-H frame for the motor torques to be in the same direction as the tilt-induced yaw (roll).

The Drone DJI Enterprise https://www.dji.com/ch/matrice-200-series-v2?site=brandsite&from=landing_page
has the mots also tilt inwards. May it helps also in Pitch stability for Kopter Tailsitters (X and +)?

This paper: https://arxiv.org/pdf/1709.07936.pdf
looks like a good analysis of the effects of both dihedral and twist angles for quadcopters.

But I’d expect that the dynamics for a copter tailsitter would be dominated by the wing when airspeed is nonzero (which is most of the time).

Hi Mark and Leonard,
With your help finally I got it ready. RF8 with Ubuntu, Win10, SITL on the same PC.
Again great thanks for your help, without I would have stopped long ago.
Here the result https://youtu.be/csj25gUkK2A
or may be better Quality here: https://drive.google.com/open?id=1X9uVr5kZztIxT-yCkh7XwbSgxvoCSYTM
In the meantime I tested olso the Skydroid T10 which is as light to use for this small wing for FPV.
https://www.banggood.com/Skydroid-T10-2_4GHz-10CH-FHSS-Transmitter-with-R10R10-Mini-Receiver-and-Camera-Support-S_BUS-PPM-PWM-Output-p-1566249.html?rmmds=search&ID=528224&cur_warehouse=CN
I tested it with my old DJI Hexa Firefly. The max range was not 10 km, but 900m are sufficent for me.
After the long brain work is now manual work the next step.

Congratulations on winning the battle with Windows and Realflight

The transitions looked good to me; was this on master?
The YouTube video quality shows as 1080p, which is fine, but the 2nd and 3rd links are the same.
Skydroid looks interesting.

In case you want to test another Model, I would like to help too with drawing it in 3DS Max.
Sorry, copy paste error, already edited.
The firmware for this is made by a “Master”

but not shure what I use.
In Ubuntu, home/lorbass/ardupilot/ArduPlane I found a File “version.h” with this content:
#pragma once

#ifndef FORCE_VERSION_H_INCLUDE
#error version.h should never be included directly. You probably want to include AP_Common/AP_FWVersion.h
#endif

By the way: In RF8 when leaving the Editor, RF8 nomore crashed in Win10.

When you run sim_vehicle.py to start SITL, it builds the firmware you have currently checked out. There should be lines like this in the console output:

To see what branch is currently checked out, type “git status” in your ardupilot/ArduPlane directory:

To update to the latest version of master:

You probably want to do a “git pull” periodically since master changes often. There will be no output from the submodule update command unless a submodule has been changed.

If you wanted to do release testing for plane 4.0, you could check that out instead:
“git checkout ap/plane4.0”

Thanks for the offer to do graphics for new models; it would be fun to do one similar to the BlackFly or @losawing 's latest model. You could even make it amphibious

There’s also a startup called F-Drones: https://www.f-drones.com/our-team-copy which is planning a heavy-lift version of a bi-wing tailsitter. (CGI graphics about 30 seconds into the video)

To see what branch is currently checked out

On branch pr12869
Untracked files:
(use “git add …” to incklude in what will be committed)
BiWing/
CaipiQuad/
Caipirinha/
nothing added to commit but untracked files present (use “git add” to track)

was the answer.
After “git pull” a lot of lines but after “git status” the same message as above (On branch pr12869)

I think I will try first the BlackLetpi, if @losawing can give me the measures. Threre will be a new chalenges with the mots an wings 45° to the fuselage. You remember, these had to be drawn horizontally whyle the wing is vertically.
What do you mean with “amphibious”? No holes underneathe.

I forgot that you were using a PR branch.
Since that PR has been merged into master, you can now do

to use the latest code. The “untracked files” are the files and folders that you have created for running SITL. It’s a reminder that they aren’t stored in the git repo, so you should back them up separately, if necessary. Since those files are mainly just parameters and logs, I don’t back them up myself, just delete old logs so they don’t take up too much disk space.

With the right kind of fuselage, it would be possible to do water T&Ls with a tailsitter like the “BlackLetpi”. The BlackFly can float, but there’s not much to see in their videos: https://youtu.be/l53JKod9yfA?t=23

you can now do

Now master in my SITL, hoping it is still flying.

The BlackFly can float

Floating would be nescessary when no runway is avalaible. May be in Canada where they have lakes and forest only.
Do you mean something lake that? 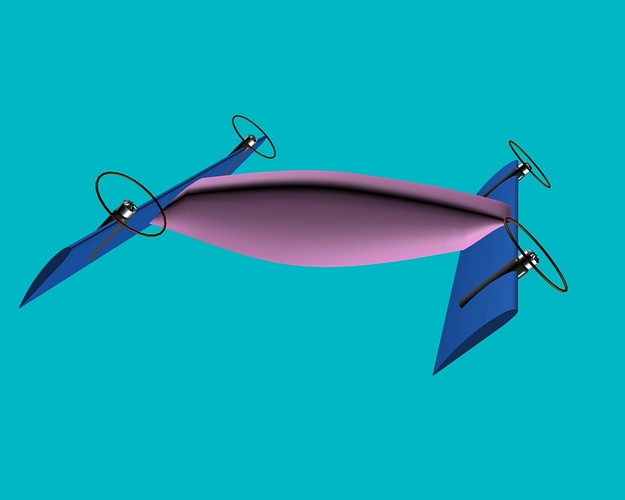 BlackLetpi_sketch.jpg1000×800 46.7 KB
This is a sketch only. The dimensions are estimated from the video.(Exept the nr of the mots)
Do you wish some changes in the proportion, wings, mots?
Will try in the meantime how to design the Propulsion that it works for RF8.
2 Likes
losawing (letpi) January 11, 2020, 11:27am #293

The board wing make sense because this is the lightest solution but a biconvex airfoil would probably give better performances.

@lorbass Great! Your RF8 tailsitters should fly well now using master, and if they don’t, you can always check out pr12869 again

But in that case, we would want to figure out what was wrong in master…

Yes, your sketch looks like it would float, and RealFlight can simulate that. It would be great to see where the waterline is and test takeoff and landing characteristics before getting real hardware wet.

May be it float to high, because built for Gras. Not yet tested in SITL

Wow, that was fast, also looks very nice… I haven’t got FW modes working right yet, but found another sitl bug getting this far. The main battery position was wrong, but it floats pretty close to the red/black line.
Here’s a short capture to show the water interactions and the auto-land problem.

Also verry fast airborn. I could profit of the BiWing Design. In the Water it looks better than I thougt.
With floating we are ahead of the Original BlackFly.

The red bottom is the Underwater coating as usual for Boats.
I’m shure you will be able to solve the new challenge with landing. May beby cutoff the back motors when touching the ground.
This behavior was also with the verry early (8 years) Copters as RTL was “inveted”. No idea how it was solved.