I have an odd problem with a hexacopter. The company I work for owns 6 of these, 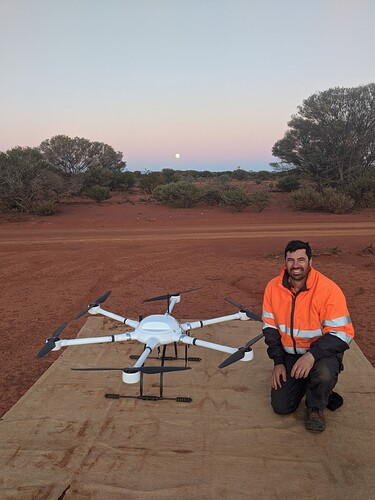 PXL_20220811_2224275971920×2560 381 KB
It’s a Skylle from MMC UAV.
All of them work awesomly well, one of them has flown thousands of kilometres and none have any issues except for one in particular. So the tuning is the same for all of them, initially I thought the problem was tuning, but it can’t be if the others don’t have the same issue.

I now know it’s definitely not tuning because the huge oscillations happen randomly, last night it happened with no wind and the copter launched itself sideways over the top of people nearby, it was very frightening.

The .bin files are here;
https://airgeox-my.sharepoint.com/:f:/p/adam_kroll/Evan9DF7rLlKpj-c6CQNB40B845mVL9X2PUKTmvBK1wFQQ?e=FoL4LU

The copter flew fine for the first 50 hours, the first log is the first day it happened, at 14:18:20, 14:18:50 and 14:22:16.
After this flight I thought it was a tuning issue because RC out 3 and 4 were hitting minimum PWM values.
So I did a couple of tuning flights, triple checked all of the parameters, updated the firmware to 4.2.3, but the probem persisted on the second .bin file.
The wild oscillations happened at 18:24:39 and 18:26:27. After looking at these logs I thought it was the gyro’s, GyrX and GyrY may spike slightly before the huge roll and pitches.
I then did an accelerometer calibration and compass calibration for good measure and then flew again, producing the third bin file, but the wild oscillations happened again at 17:32:13.

I’m at a loss now as to the cause of this, I’m using a cube orange, I noticed that the GyrX and GyrY spikes that may precede the wild oscillations are shown in all three IMU’s, which is odd because the Cube is supposed to have two different types of IMU’s with different characteristics, which probably rules out a hardware failure.

The vibrations are low, I’m using an RTK GPS, I’m using a Mausch power board so there’s no power issues, I’m using the drotek compass, everything seems to be working fine, I can’t work out what the issue is. Your help would be much appreciated.

The first thing that I noticed is that:

MOT_SPIN_MIN < MOT_SPIN_ARM. This has to be the other way around (Setting Motor Range — Copter documentation). Also, MOT_SPIN_MIN seems a bit high. Check if it can be lowered so it allows the motors to go even lower in terms of PWM.

Vibrations on Z axis seem a bit high hitting (and sometimes going over) the 30 mark as shown bellow:

These are some initial points that I have. I’,m not sure if they are the source of the problem though

Thanks very much for your feedback. Yes you’re right about MOT_SPIN_MIN, I’ll lower it below MOT_SPIN_ARM. I’m fairly sure that MOT_THST_HOVER is about right, it’s a very efficient airframe with very large props, so I’ll lower MOT_SPIN_MIN to be below it.

The vibration on the Z axis is high and we do sometimes get tertiary clipping, no primary or secondary, but it’s the same on all of our Skylle aircraft and the others don’t have this behaviour. None of the aircraft have any vibration dampening under the cube, this is something that could be improved.

Thanks again for your help and I’ll make the change and do a test flight. Cheers,

I dont see the actual cause yet, but current certainly does spike (20 amps up to 120 amps) so maybe there’s an intermittent power distribution or wiring fault.
While you are busy searching and fault finding, check out this guide:

Good find Mark! ESC grounding issues are made up 3 forms of ESC signalling/coupling problems, resistive, capacitive and inductive. All three should be considered when building an aircraft. Inductive: This is the tendency for sudden changes in current to cause large voltage spikes in your system. Inductance in your power system is primarily caused by the size of the loop formed by the positive and negative leads between the esc and battery. So the longer the cables to the ESC the higher the in…

Also on the map, at the start and end of the flight, IMU and GPS positions differ. This is usually because of vibrations, but your vibes look OK.
In my (limited) experience with IMU failure there usually appears nothing wrong in the logs (attitude is good, horizontal and stable) despite the craft meeting the ground at some crazy angle. So far it doesnt look like IMU failure in your case.

What ESCs are you using, these might need adjusting:
MOT_PWM_MAX,2000
MOT_PWM_MIN,1000
and even ESC calibration

As mentioned by Dave, just lower MOT_SPIN_ARM so that there is reliable start up of motors.

Z axis is not ideal but it should be OK for now.

Will do, I’ll post a new .bin ithe next couple of days.

Thanks heaps for your analysis, it looks like a voltage spike may be preceeding the issue. 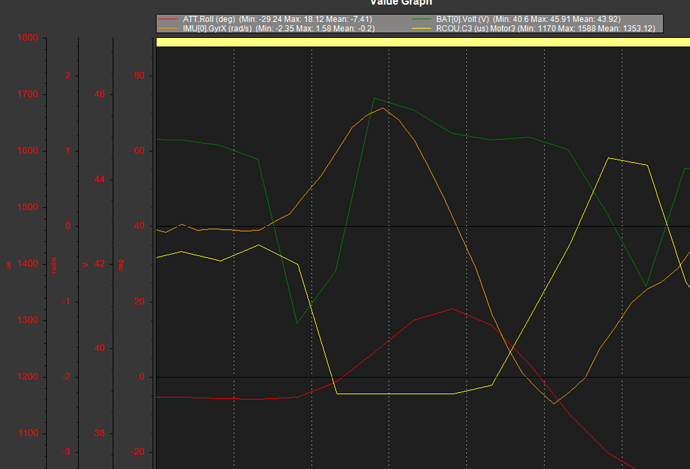 Hi All, I made the paramater changes suggested and have another log here;
https://airgeox-my.sharepoint.com/:u:/p/adam_kroll/EeHX_lkUwLFBu0GfSthd9y4BnzdYPzl1mGrsx5QNLZRlCg?e=QdnrF2

The copter started going into the wild oscillations nearly straight away. The odd thing was that it would always do the oscillations in auto mode, but never in loiter mode. I’m not sure what difference that makes, what sensors doesn’t it use when in loiter and not auto?

The oscillations started happening after we drove out to a really remote area that had very rough tracks to get to, it was 3 hours of rough driving. I had a suspicion that the IMU housing had become damaged, because all 3 IMU correlated with spikes before going into oscillation, so I think the housing that held the 3 IMU’s in place was damaged and became unseated with vibration, causing the sudden spikes.

So I purchased a new cube orange and it flies perfectly now. Link here;
https://airgeox-my.sharepoint.com/:u:/p/adam_kroll/EcAJjX0_2mNBo-1qyAWP2QQBzgsd9CAr7RW_RDmxxrT3yQ?e=94v3Rh

This rules out any electrical issues and narrows it down to sensors in the cube.

Thanks everyone for their help in solving this. Adam.