Hi all,
Attached the log file of Cube orange single here3 gps, 24 inch prop 6S battery. crashed like hell, with EKF error.
can anyone look into it and rectify on something I am missing.

Just having a superquick look I found you are running incredibly high vibrations…which shot up even higher just before the crash. All IMU’s were clipping which prompted the AP to switch IMU’s only to find more of the same. 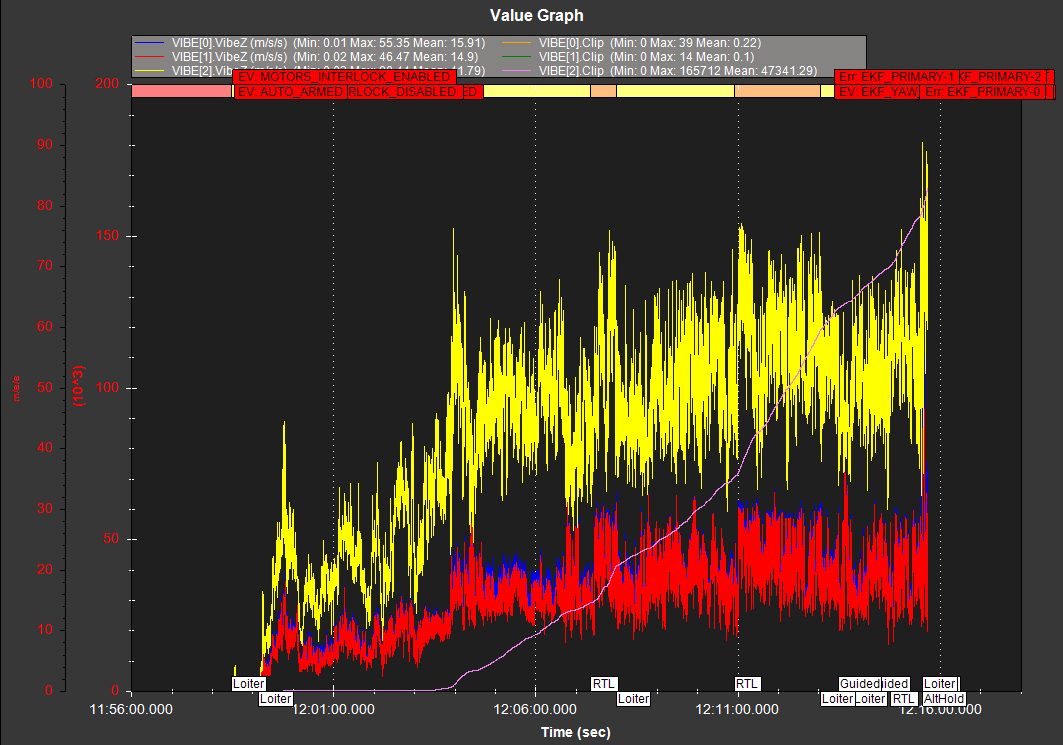 Some motors are going mental too around the same time… 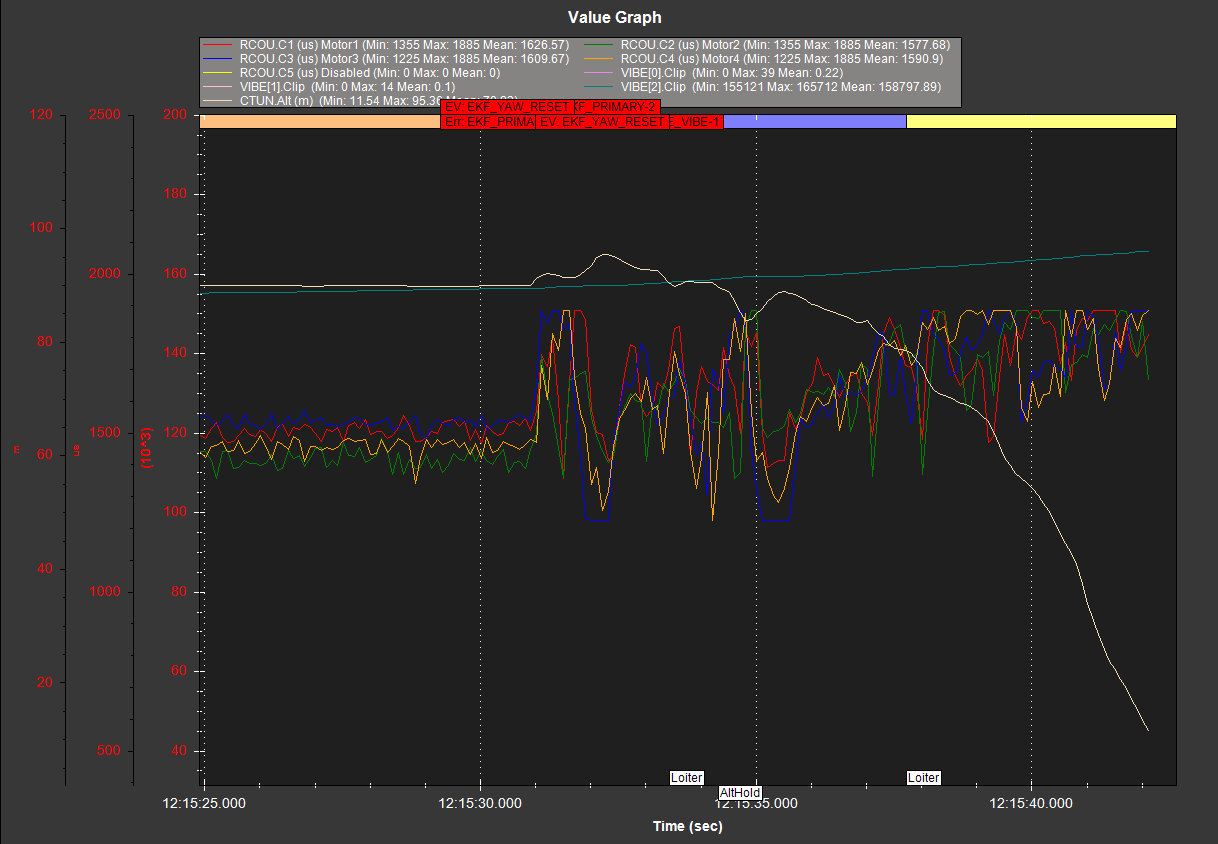 Okay, thanks for the response. I did look other logs, everywhere there was a constant vibe all over at different altitudes. And investigated the crashed drone in which cube was intact even after the crash. All frame is a custom carbon fibre and aluminium construction(point here is no flex in the frame) how could this increase in vibe… really wondering

You could send a picture of the frame. I guess the frame wasn’t as fortunate as the cube though. But still. Interesting to see how it was built

What is VIBE[2] why is it higher from other VIBE values? is it third IMU data?

What is VIBE[2] why is it higher from other VIBE values?

It’s the non-isolated IMU on the Cube. Higher vibe values are to be expected but those are very high. The least you could do is configure the Dynamic Notch Filter, this is part of basic tuning. But reducing overall Vibe levels should be a goal anyway.

Flex in an airframe isn’t the source of the vibration, it’s a result. The vibration comes from the moving parts, specifically the motors and props. Flex and loose objects will resonate or vibrate in sympathy with the props and that can cause issues. If the frame design is solid then start looking at all the things attached to it. Is there a wire harness bouncing on the Cube, or conversely is there a wire so tight it’s acting like a guitar string. Are the props in good condition? Is the landing gear secure? Do you have flexible antennas?

Just looking at the image of the vibes posted above, I’d say look at your props track or any vertical movement in the motors or arms.

oh, understood. thanks for the clarification. is there a case of cube failure? any loose parts inside cube caused this?

Hi Allister can you give me some more deep insight of the vertical movement in the motor or arms?
if you look at the log the event happened after 15 mins in flight, it was a still and calm weather.
why didin’t this happened immediately after take off?

little concerning on this part, there was a flight in which auto-tune was done. in between auto-tune and crashed flights there was one more sortie, which also performed well.

Actually I think something did happen much earlier in the flight. 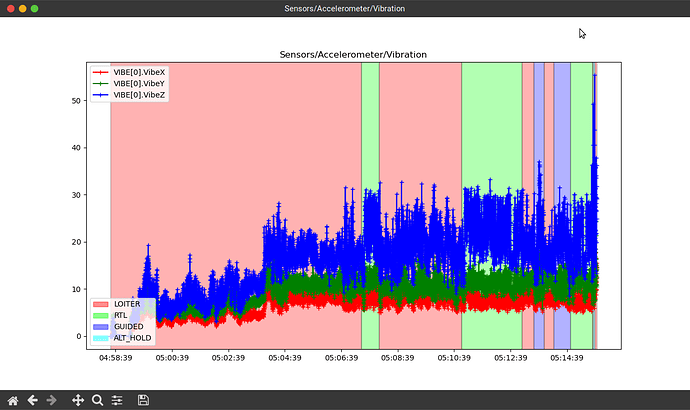 You can see the point about 1/3 into the flight where the vibrations jump up. 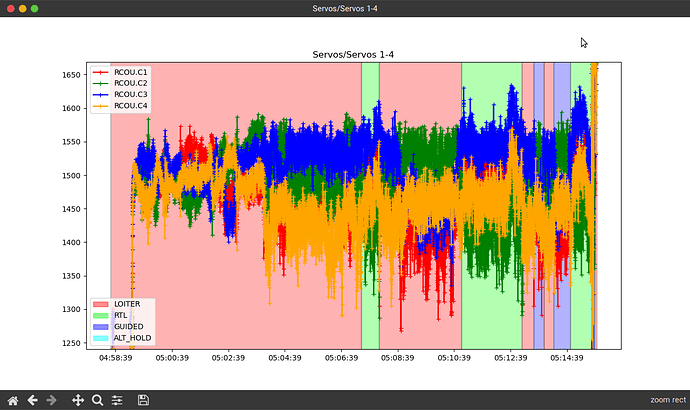 On the same scale you can see the motor outputs go from close to pretty wild.

Before that 1/3rd point, when you were hovering with zero stick input, the quad was sitting pretty even and not moving around much. 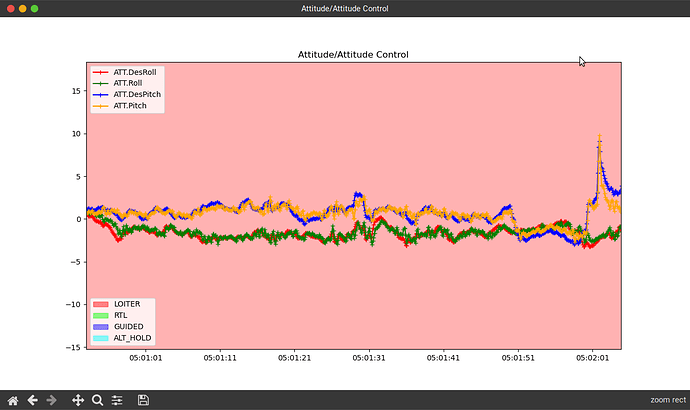 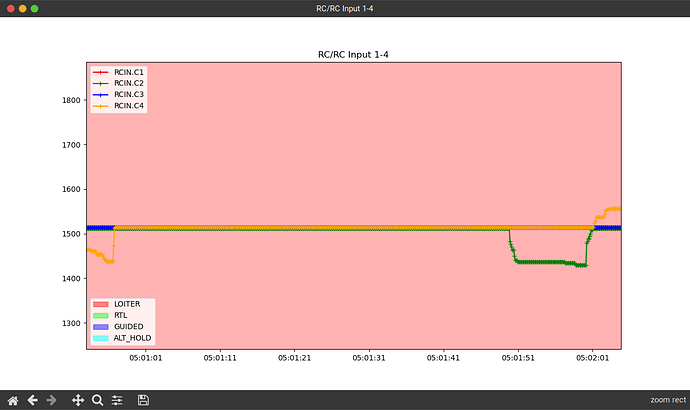 After that point, during a similar hover you can see how the pitch and roll is much more unstable. There is more oscillation and quad is sitting at a very different angle. I didn’t look at the yaw angle, but since you said it was still and calm wind that shouldn’t matter. I would expect that the quad should hover at the same angle at any point in time if there’s no wind. Compare the following set of graphs to the previous set. The pitch and roll should be the same as the previous set given inputs are the same. 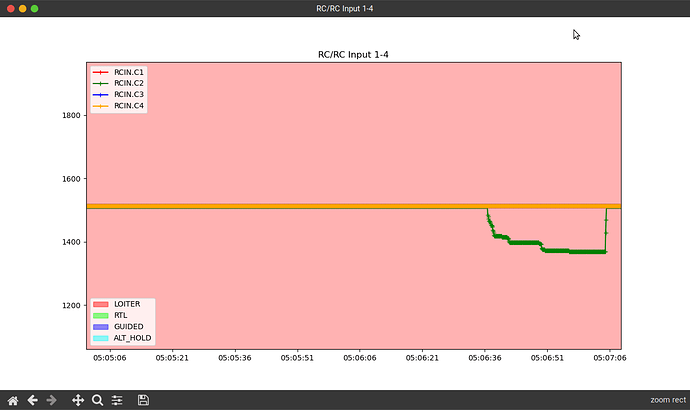 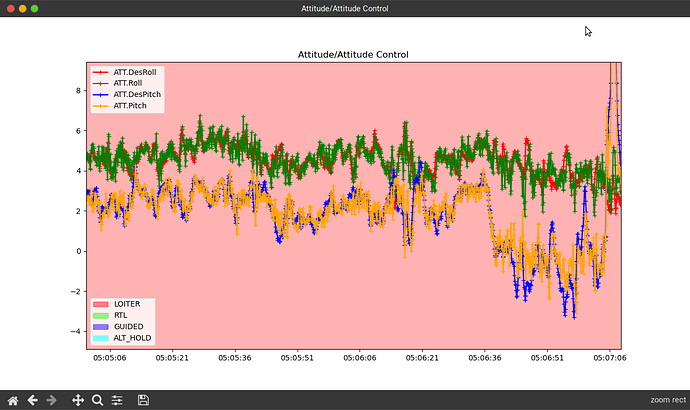 All that to say, I think something physically changed on the quad earlier in the flight. Given the sudden change it makes me think something broke loose. I didn’t grab a screen shot, but that change in vibration level (and everything else) occurred at the same point as the quad was stopping from a ~5m/s forward flight. At that point it pitched backwards pretty aggressively to stop.

So again, an arm or motor came loose, or I’m even wondering if a prop came loose. I wouldn’t even rule out the battery coming loose since this one was big enough to have an impact. The sudden change in flight really makes me think it’s a mechanical issue, not a firmware/electronic issue.

I think @Allister has summed it up pretty well. With the data showing the vibrations growing over time (across all IMUs) it is reasonable to conclude something came loose and slipped/moved on the copter. It could be the AP but it is more likely related to the airframe/motors/props…something mechanical anyway.

Hi Dave.
You say that due to the non-isolated IMU (third IMU) and high noise, the angle data calculated in the third line of EKF1 (or XKF1[2] in the log) had an error. However, why did the autopilot switch to the third lane when the first and second lanes produce consistent and correct data?
The figure below shows this problem. It can be seen that the difference in pitch angle when switching the lane was about 14 degrees. 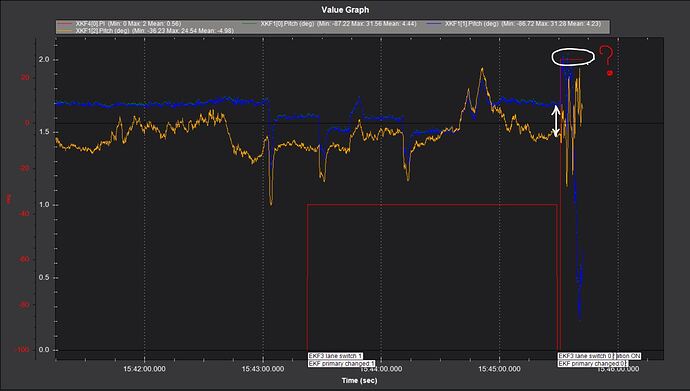 You say that due to the non-isolated IMU (third IMU) and high noise, the angle data calculated in the third line of EKF1 (or XKF1[2] in the log) had an error.

No, I simply answered the question why Vibe2 is higher than the other 2 IMU’s.

Sorry. So I got it wrong.
Can you please help me to find the problem?

Hi flite_Analysis,
I think the main reason for switching to the unhealthy lane.
It can be seen that from the beginning of the flight, the third lane of EKF had a different value from the other two lanes (this could be due to the high level of vibration). The figure below shows this problem for the roll angle. 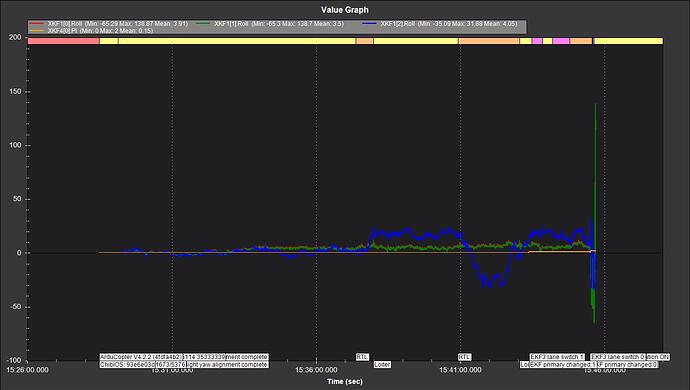 When the message “EKF3 lane switch 2” occurs and the autopilot switches to the third lane, the drone fell due to the wrong angles in this lane while the 1st and 2nd lanes correctly show that the drone is rolling in the air! 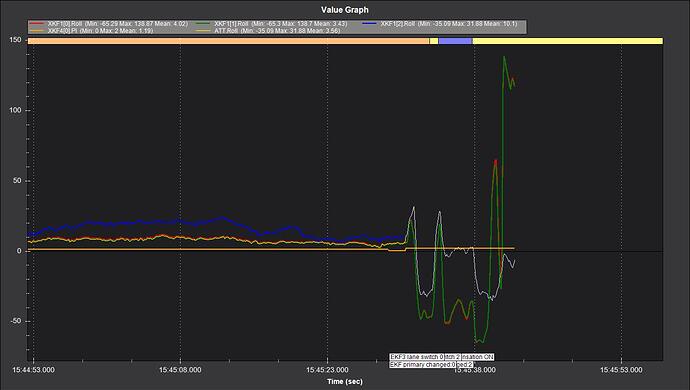 This issue has happened to me and I still don’t have a complete answer for that.