Thanks for this, and thanks for the tip about increasing WPNAV_SPEED this might help us in the short term testing of this aircraft until PR is in.

Reading through the issue and pull request, reminds that we also saw these big yaw movements occur a few times when the GPS Primary switched. We resolved the issue in the field by changing GPS_AUTOSWITCH from 1 to 4 to avoid switching. I presume this would be the same thing, position error causes target velocity to go above 5% of WPNAV_SPEED, which causes the aircraft to yaw to face direction of travel?
Would this be addressed by the PR also or is this perhaps even desired behaviour?
Can dig up a log to show this if needed.

Sorry for all the questions, appreciate you taking the time to explain things!

Edit: I found the log, looks like it is the same thing happening on the GPS Primary Change events:
I should note that at the time of these flights our aircraft was having magnetic intereference problems with the compass but I dont think that is influencing what is happening here. 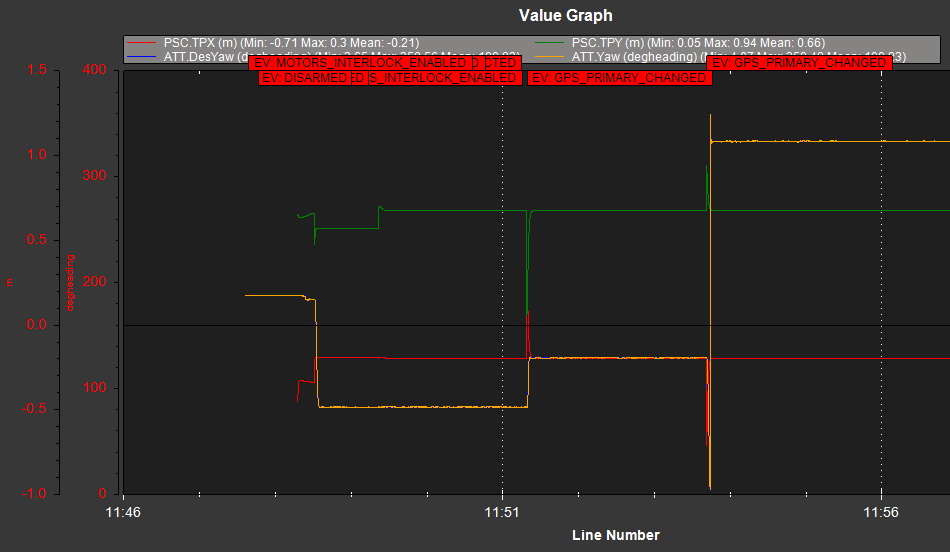 Ok txs for the feedback.

One of the changes in 4.1’s guided mode is that by default the vehicle will point in the direction it is moving. In 4.0 the yaw was always fixed unless the caller specifically took control.

@Leonardthall believes the new method is better because it allows external callers to more easily achieve coordinated turns. E.g. by default the vehicle will turn in the direction of the specified position, velocity and/or acceleration. In Copter-4.0 the caller would need to specify the pos, vel, accel and the yaw.

By the way, if you don’t want the yaw moving around on its own, it might be best to take direct control of it by providing a yaw and/or yaw_rate target. You probably already know but there are yaw andr yaw_rate fields and bits in the type_mask field.

Makes sense, thanks.
I certainly agree with wanting nice coordinated turns without needing to control yaw from the GCS.
Although it would be nice if the AP could distinguish between movements to acheive a new setpoint from the user, vs movements to maintain a constant setpoint.

And of course you are right that the best way is to control yaw directly - I need to work on adding that to QGC if I can.

We have been continuing our testing of guided mode in 4.1, and had something a little scary happen. Twice in a row we had the aircraft start to fly away after the takeoff completed in guided mode.
The procedure was the same as before: Press takeoff button in QGC and slide to takeoff to 10m.
When the aircraft reached altitude, it yawed around, and started traveling in the direction it was facing.

My first thought was the GCS sending it a command to go somewhere, but I looked through the tlogs in wireshark to see if the problem was on the gcs side sending a bad command, and I see only 3 messages sent from the GCS which all looks ok.

In the logs, I see that when the takeoff completes, the TPx and TPy start moving as the vehicle accelerates. 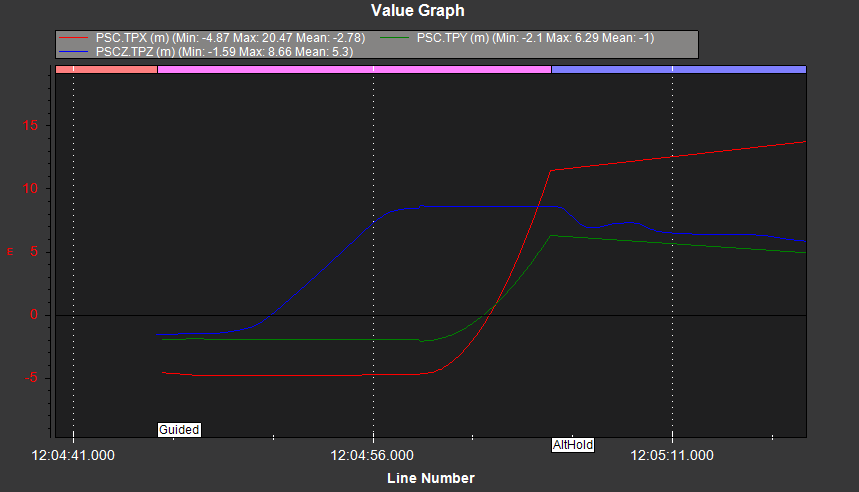 In the two times we did this, the aircraft went in two different directions.
In these flights we were able to switch into loiter and the aircraft flew normally.

Where in the logs would I see the position target that guided mode is working to achieve? I see the TPx and TPy moving but I want to know what position it is heading for and where it gets this from.

Sorry for the scary event. I’ve had a look at the log and gone through guided mode but I don’t immediately see where the issue could be so I’ll investigate with @Leonardthall.

When a new target is received you should see a “GUID” message in the logs (but there aren’t any in either log).

@rmackay9
Will give rc1 a try tomorrow.

Looks like the “PreArm: EKF attitude is bad” issue, that I described here and here is still open. This means, a copter configured for GPS-for-Yaw still can not be armed (e.g. for motor test) inside a building without GPS as compass is only a fallback after GPS-for-yaw has initialized yaw at least once.

Yes, the issue of not being able to initialise the yaw from GPS-for-yaw is still on the issues list and is unlikely to be resolved before 4.1.0 is released. I’ve added it to the GPS-for-yaw improvements issue but I suspect this is one that @tridge will need to help us with.

@Hacky Could you repeat the test using this firmware. It has additional logging.

@Leonardthall
I guess, you mean a test for the “PreArm: EKF attitude is bad” issue when trying to arm without having a GPS for Yaw initialization before?

Here is the log recorded with your V4.1.0-rc2-PSC firmware:
https://drive.google.com/file/d/1lj0C0A70wfCS_2_iWpLfQhQQO83CdUbC/view?usp=sharing

@rmackay9
I recognized another issue with rc1 as well as with rc2:
During the download of a bin logfile from the Cube Orange, I get messages like

I have enabled LOG_DISARMED: 1 and LOG_REPLAY: 1, so the download of an older log takes place during a newer one is recorded.

You do not find the error message in the new bin log written during the download process but you can see / hear it, when replaying the tlog.

I mention this, because I also had these “Error pos vert variance” messages when the EKF3 position estimate was going mad which caused a crash with beta5 (you still have that in your issue list).

May be, this has something to do with the communication going on when using GPS for Yaw with two ublox F9P relaying RTCM messages through the Pixhawk.

Log file download pegs the CPU and nothing else can run which is why you see the errors you do. It’s a known issue and will not affect you in flight.

like @andyp1per said, that is normal and you can ignore it.

Sure - BUT when I also see these messages on the ground or even in-flight when there was no download active, it may be an indicator that the CPU is heavily pegged, right?

It is a good idea to limit the amount of constellations the F9P listens to in order to reduce GPS communication traffic, yes.

How many bytes per second is your RTCM injection doing? Should be bellow 4Kbytes/s?

Could you repeat the test using this firmware. It has additional logging.

Sorry, that was supposed to be James.

Yes, this firmware from @Leonardthall is for @james33 so that we can hopefully get to the bottom of the “scary guided” issue.

You haven’t had a chance to test the binary from @Leonardthall have you? Sorry to be pushy but “scary guided” (as we are calling it) is the final blocker for the 4.1.0 release so I’m quite keen that we get to the bottom of it.

By the way, we’ve modified Guided mode’s behaviour after takeoff has completed and I suspect this will mean that the issue cannot be reproduced using 4.1.0-rc3 but I would like to be sure. Because it is difficult to prove something doesn’t happen ideally we’d like you to try and reproduce the issue with the binary that Leonard has provided.

My apologies, I have not had a chance to test it yet, we had to roll back to 4.0.7 to work towards a deadline for a demo.
I will endeavor to test as soon as we can, but the weather here is forecast for rain for the next 5 days at least, so it will probably be about a week till we could test this.

Sorry for the delay.

Found a break in the weather and did this test just now.
With the firmware Leonard provided, managed to reproduce this issue on 3/3 takeoffs.
Then we flashed rc3 and did 4 takeoffs without the error occuring.

Hope the logs are useful, looks like the problem is fixed.
Two logs from the PSC firmware showing the issue, and two logs from rc3 with normal takeoffs.

Sorry this took so long