same thing this time resulted in a crash, gps set to default

Hey @rmackay9
I just saw the updated GCS failsafe documentation done. Nicely done. I’ll be doing couple of flights tomorrow. Let me know if anything has to be tested specifically.
Thank you

same thing this time resulted in a crash, gps set to default

Where are you tying to fly? The last log showed very poor GPS performance. Are you trying to do this indoors in dense tree cover? That’s going to happen to anything using a GPS.

Maybe a flow sensor and lidar is enabled by default, but not implemented. I’ll check the parameters.

dear friends,
today i flew a lot the new software. theire were some things i would like to mention.

Hey @rmackay9
Did a flight test today. I added ESC telemetry before going to fly today. I’m able to receive all ESC parameters except for Current values.
I noticed there was problem 3 times today where board didn’t boot after connecting battery. It just goes blank with power LEDs ON and AP doesn’t boot after that(no boot sound too). Probably boot time issue?
I’m trying to record video of it, but its kind of not repeatable.
There was no issue with flying. I changed my Mag position a bit, You might notice a bit higher offsets in the log.
Tried AutoTune just to check whether it was working fine and it works.
Auto Missions work well too. I even pushed the aircraft to max bank angles and Ardupilot handles it well.
Thank you.

Thank you very much, looking forward to it.

GPS no work with 4.0 RC3 on OMNIBUS f4 PRO. Mission planner says: no GPS. With RC2 works well … same hardware.
how can I do? Thanks

All OK on omnibus nano. Stabilize and auto both working great.

Issues so far on Orange Cube:
Second onboard MAG is not correctly detected:

Mag calibration was a nightmare. It took 10+ attempts for a calibration to succeed with internal + external. External being a Here2 I tried with both 0 and 1.17 in _SCALE. It didn’t help. And checking params, seems that calibration started messing around with _scale as well, as I’ve seen external go 1.23 and internal 1.05
FrSky passthru starts off the bat, as I reported before, but works only with external port inverter. SERIAL_OPTIONS 7 still won’t work. Tested on serial 1, 2 and 4 (telem1, 2 and gps2)

My motors are still mapped on Aux channels and set to DShot600, but logs still show PWM values in RCOUT

@Alberto_Ds, we haven’t made any changes to the Omnibus f4 Pro between -rc2 and -rc3 so it’s not clear why the GPS would stop working. Could you please include a dataflash log so we can investigate further.

@hwurzburg, do you have an omnibusf4 pro? If “yes” could you double check that your GPS is working?

The first change is the most important but nobody should actually notice a difference. Still, we couldn’t risk releasing 4.0.0 next week using a different compiler from what was used during beta testing.

Sorry for causing confusion by releasing -rc4 without a separate announcement but should be just a minor change on -rc3.

Hey @rmackay9
Uploaded rc4 and pixhawk lights went solid blue. I know both here1 gnss and pixhawk LED are on I2C line. I don’t why only here1 LEDs are working fine and not pixhawk one. Pixhawk lights are fine after reboot. And Compiler update is 6.3.1 or 7.3.1? 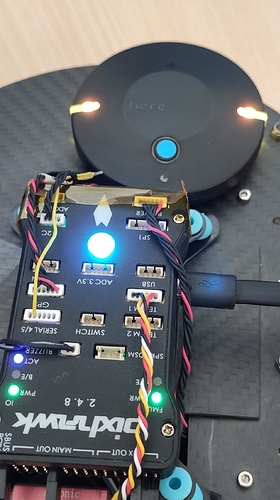 There was an update to the bootloader for the H7 boards. You might want to try reflashing your bootloader - no idea if its related, but FYI.