Copter-3.5.0-rc8 has been released for beta testing

Copter-3.5.0-rc8 has just been released and is available through the Mission Planner’s (and other GCS’s) beta firmware’s link. This is just bug fixes and minor enhancements over -rc7:

For those who have discovered potential issues during testing, please create a new topic in the Copter-3.5 category and if possible include a dataflash log file (aka a “.bin” file).

I think we are very close to the final release now. I think we have identified these outstanding issues but it is debatable whether they all need to be resolved before go-live.

If you think I have missed some critical issues and want me to look into them further, could you reply to this thread with a link? I’ll jump on them and re-investigate.

Thanks again for contributing to making this a solid release!

Yay! I will get this out to the Solo beta testers this evening!

The arducopter crashes on erle brain board constantly, without being armed and at random time. Could there be compatibility issues?

Running ardupilot 3.5.0 rc 7 on Erle brain 3 turns out to be bit dangerous: the ardupilot would occasionally crush and restart, even without the copter being armed. This happened with other dev- or 3.5 version too. Attached is a log for this matter. I am running on erle brain 3 with only PWM output and receiver attached. Two logs before and after the ardupilot crash. 00000057.BIN (120 KB) 00000056.BIN (256 KB)

JD-ETH,
Thanks for the report. I’ve added this to the critical list and I see Lucas is working with you.
Are there any NAVIO2 users out there? Having similar problems or is NAVIO2 ok?

I rebuilt everything again and it still kept happening.

I’m building it for my Erle-Brain 3, I will test it.

Do We have to redo autotune cause of filters changes?

@cala2 i saw that my I values weren’t close to the new IMAX, so if yours are at max then yes, your tune would change.

I hadn’t flown my tricopter since 3.3, so i am a bit behind. I reconfigured everything from scratch, did autotune 2 times to get a nice tune (i always do that and i feel like the first tune gets it close, but the second tune ontop of the first gets it all the way).

I think the new release will be amazing, and i love the new position hold autotune, makes life sooo much easier. It’s pretty cool to watch it turn into the wind and in the yaw part of the tune do a little circle maneuver

Thanks to all the guys that make this firmware possible, sorry you guys had such troubles last year.
Thank you Randy <3
Thank you Leonard Hall <3 (i think you did the tricopter specific improvements, sorry i didn’t test until now)

Do We have to redo autotune cause of filters changes?

Hi Cala,
No you should not have to change your tune with the filter or I MAX default changes.

Are there any NAVIO2 users out there? Having similar problems or is NAVIO2 ok?

Here is an onboard video:

Myself and several others have loaded plain old RC8 onto our green cube equipped solos. No custom build, no baked in defaults from ROMFS. Just 3.5-RC8, and load the required parameters. It’s flying great! 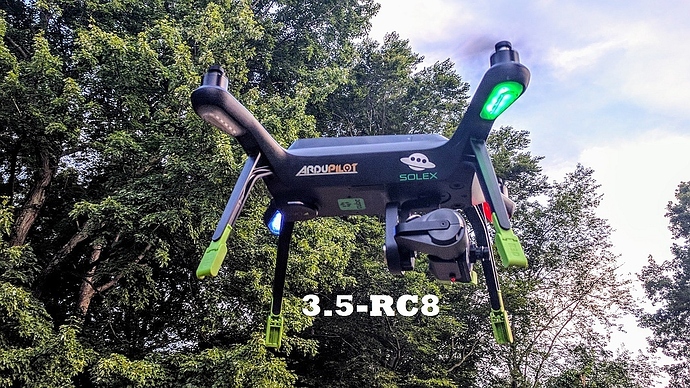 The 3.6 dev version would have the same issue too. Tried running with gdb(no issue), running with --debug version (no core dump file generated), so I am not moving forward… Hopefully this problem could be resolved soon.

I flew again yesterday with rc7 and twice had the “home location updated” message while in flight. At RTL the copter tried to go back to the flight location, not the arm location. Is it just me?

Did you take off before the GPS was ready? That’s what happens if you do that.

No. I always wait for ready to arm in PosHold to avoid that issue.

Strange. Can you post the dataflash log to be looked at here. Also, your post says RC7, but we’re on RC8 now. @rmackay9, this looks troubling, but never seen anyone else have this happen before either. What would cause the home location to change multiple times in flight?

Same here (“home location updated” message while in flight), some weeks ago on a small pixracer quad. Will check I find a log and make a test with rc8.

Can one of you create a new post in the 3.5 forum for this issue? Please include details such as what vehicle, what flight controller, what firmware, and post dataflash logs.