Last night I took my Hex running Copter 3.5.0-RC5 out for a flight. I had flown 5 prior Auto missions with this configuration and it flew great.

About 3 minutes into the flight I had EKF failsafe. As the failsafe triggered it forced a landing, it clipped a tree, and crashed hard.

Can someone help me understand what went wrong. I am not an expert at the dataflash log analysis and wonder if anyone could help me out. Did I have a hardware failure or did something else go wrong?

Here is a link to my log file: https://drive.google.com/file/d/0B8-ATMPoKFG6aTJzZ2tDQ0duRFk/view?usp=sharing

It was a Compass variance EKF failsafe that occurred.
As your flight progresses the X and Y readings of Compass1 start to go bad.
As compass1 is an external compass could it have come loose?
Could some other interference causing event have happened to the compass?
The Z values for the same compass appear OK, so it looks more like mechanical movement than electrical interference.
And it only happens to compass1.
You also haven’t done a compass/motor calibration. 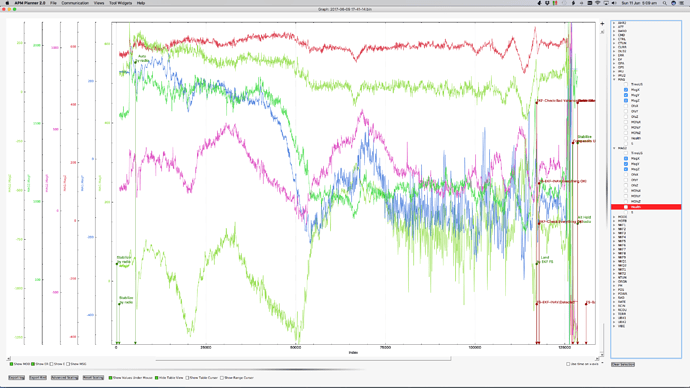 The other curious thing is the gradual reduction of the RCout3 leading up to the FS event.
Your other outputs are also running high so I suspect this hexa is running close to it’s limit, has a CofG problem, or something has come adrift in flight. 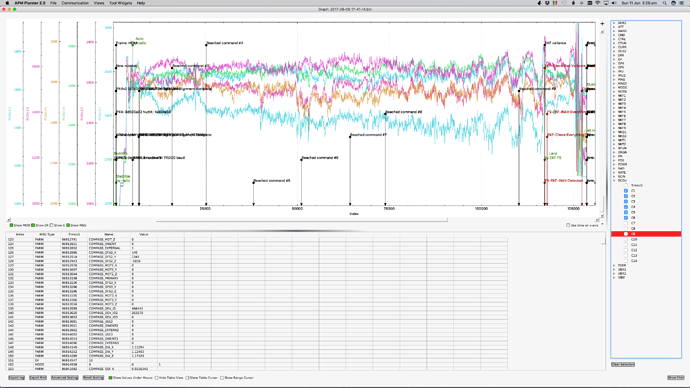 @mboland - Thank you for your help.

This setup is a build with the Pix Hawk Mini by 3DR. The external compass would be in the M8N GPS which was mounted on a mast 4 inches above the hex. Its possible that this came loose somehow during the flight.

I have replayed the mission planner telemetry logs (trying to learn as well). I noticed that the last message that mission planner gives before failsafe is Error Velocity Variance. The EKF status for Velocity goes to “red” about the same time that failsafe is triggered. Looking at the values for the GPS, I see a huge swing in the speed (velocity). Do you think this is all part of the same issue that occurred?