Hello, I would like to convert my Spider ILD 01 remote control mower to operate autonomously ,the mower has 4 WD and 4 wheel steering through 360 degrees and no skid steer so the " front " of the mower becomes the direction the wheels are pointing which means the sensor used to determine the front must be attached to the steering system and its connections would need to rotate 360 degrees relative to the mower, would this be possible ? 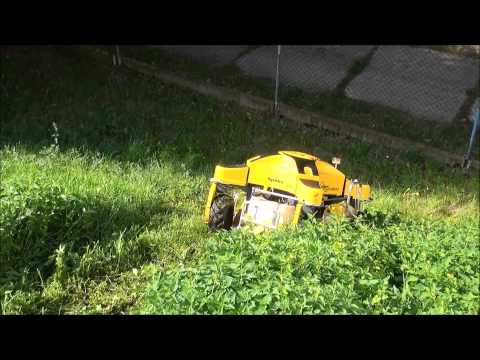 This is a fascinating machine! I’m not aware of an existing steering configuration for such a beast, but because omni (mecanum) wheels are supported, perhaps a branch of that control scheme could be modified for 360 steering like on the Spider.

@rmackay9, does that seem like a reasonable avenue for approaching this? Is there any existing config that could be used?

I guess ardurover would need extensive rework to drive such a machine. It would need feedback of the wheel steering orientation with an absolute encoder. Even incremental wheel encoders are only supported on a few autopilots and not supported via mavlink input.
This is a kind of omni directional vehicle, but the omni vehicles ardurover supports (only in manual mode), are all using some kind of special wheels.
They only need to vary three or four motor outputs to drive in any direction and do not require any feedback from the steering.

Thanks for your quick replies Yuri and Sebastian I have joined the Facebook group and will post the question there and see what we get !

So I guess it is a bit like the Mars rover perhaps? Each wheel can rotate independently although from an operator’s point of view there are two or three “modes” to control the steering:

Hi thanks for your reply, my model the ILD01 has no skid steer meaning all 4 wheels always point in the same direction through 360 degrees so the mower moves in the direction the 4 wheels are pointing and has no other option it has tractor type tyres which grip best in their correct rotation so the front of the vehicle becomes the direction the wheels are pointing so I guess if I mounted the autopilot compass so it rotates with the steering with a commutator for the connections it would be no different to a regular rover setup? but I don’t understand how the Pixhawk / Mission Planner achieves the necessary GPS accuracy for such an application ?

I have an LD01 spider. Been contemplating converting it to ArduRover for a while now.
The steering issue has been a bit of a blocking thing in terms of ArduRover, not sure how to set about configuring ArduPilot for the odd steering.
As Andrew says the wheels all steer at the same time (and in the same direction) and the LD01 heads in the direction the wheels point. The body effectively always points in the direction it did when you set off. A single motor drives a single (long) chain that drives all the wheels steering mechanism (sprocket above each wheel) so all wheels steering is mimicked on all wheels.

On my LD01 I have stripped out the existing electronics and replaced them with an Arduino and some motor controllers. This lets me drive the steering motor at different speeds, control the throttle servo and control the hydraulic direction actuator. I’m in the process of fitting an rotary encoder to the steering mechanism so that I can get a reading of the steering angle.
I figured that once I could start to monitor the steering angle I could think how this would work with ArduPilot. I do recall reading about the steering subsystem in Ardupilot (can’t remember its name) but understanding this and a bit of scripting might be the solution to the steering.