I cannot figure out why my controller signal is always low. You can see in this image that the link is reporting back to the app of “no bars” and the SV is only about 5 ft from me. I’m not sure if it is related, but it seems that ALWAYS when I’m flying in GPS mode, the controller is doing the “searching” beep. Even after I get the “GPS Hold: On” message. Every now and then it goes off, but is almost always on. I cannot figure out why. The SV is holding pretty steady, so i don’t think it is a GPS issue. 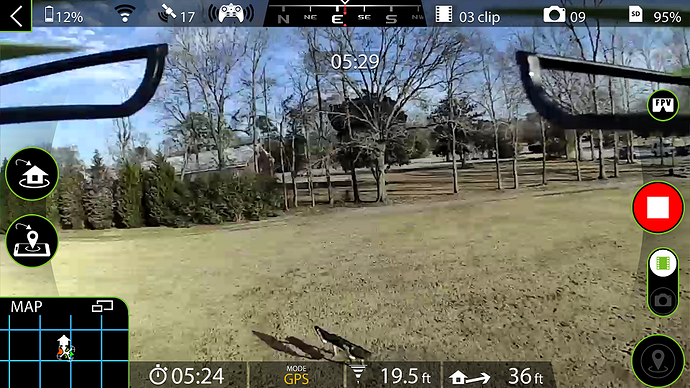 Finally, There really needs to be a better skyviper app.It is such a pain to use and the video stutters REALLY bad. The video on the Appweb status screen is better! and it’s only a 4fps refresh rate. Also, I have to wade through a myriad of like 5 different messages before i can start it up! Anyways, I guess this should have been a separate topic, just venting! My issue is, why is it always showing my controller signal as bad…I put new batteries in like 3 flights ago.

Here is my log from the flight where i noticed that my radio signal was so crazy. The drone for no reason starts wandering off towards tress, and the log shows a radio fail safe kicking in, and RTL (right into a tree). No damage thank goodness. But I cannot figure out why the fail-safe kicked in. When I connect my controller just sitting here, I have an rxrssi of 0.99, but it sharply drops in the log of this flight.
radio_lost_crash.BIN (721.7 KB)

From your logs, it looks like you held 21-22 satellites and an HDOP of 1 for the whole flight which is excellent. The map view also shows that the drone correctly registered it’s position when in went in the trees. It looks like it was already on a collision course with the trees when the radio failsafe triggered an RTL. The error RADIO-2 triggered requires loss of radio signal for two seconds which would perhaps explain why the drone was sent in a bad direction. Have you tried the range of your radio signal? For the two seconds before the failsafe was triggered the RSSI was about 0.45 which I believe is okay…

Yeah. GPS was good. I noticed the radio signal loss, but what i don’t understand is why.

Hi Scott. I see the same thing on the app. I’m sitting 3’ away and it’s on the dining room table. Never had any problem with losing signal outside until it was like so far away I could just barely see it. I wanted to try changing the antenna as it’s just a flat board inside the controller but it is removable and has a standard wifi connector. Been to lazy to try it.

I think it is just another SkyViper app issue. It works with “all models” but likely isn’t tuned very well, and I don’t think it gets much attention. I think i’ve only gotten 1 update on it in 3 months. It always thinks the battery is dead within 1 minute of flight as well, but i just push the ok on the warning message and it flies another 10 minutes. The app is pretty poor. I think it is the reason for the bad streaming video performance as well.

The app is CONSTANTLY getting attention and there has been many updates on it. If you’ve only seen one update in 3 months, the error is most likely in the ID10T category.

The app can record video to your phone, but in a reduced framerate. Best video is achieved by recording to the micro SD card where that will give you 30fps, whereas the app only gives you 20fps at best. The app has NOTHING to do with the streaming performance.

Did a SkyRocket company representative just call me an Idiot? Really? 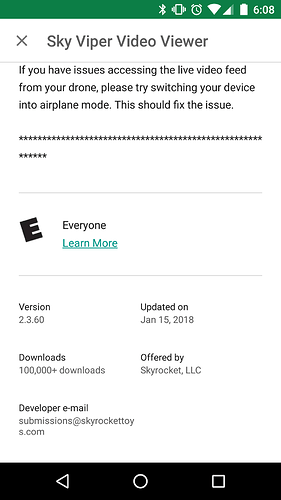 Screenshot_20180221-060827.png1080×1920 114 KB
Looks like the last update according to this was Jan 15. Just took this two seconds ago. You see I’m not an Idiot. While I’m new to quad and RCs I’ve been doing software testing for aircraft avionics for 12 years including flight testing. I have made a living on testing software and reporting both functional and performance bugs. The app software is buggy. The battery level is always wrong, the signal level is almost always 0. The video stutters and freezes. And I’m not talking recording, I’m talking using the life video to fly the drone. It’ll work fine for a few minutes then get worse and worse. While I can attribute some to my older phone, my tablet is very powerful and does the same thing.

However I believe the point is that a company representative shouldn’t behave in such ways, especially towards people who have been advocating for the brand. Criticism of part of a product should be welcomed to help improve the brand, especially when it comes from customers who are already happy with the product.