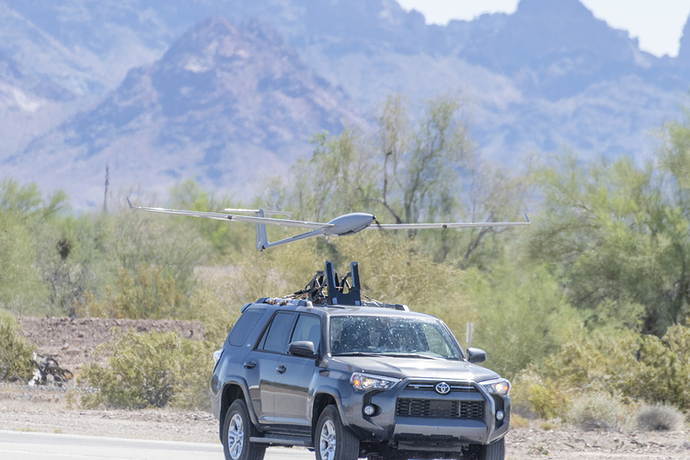 Kraus Hamdani Aerospace provides both commercial and defense based customers with long endurance platforms equipped with specialised sensors, payloads and communications equipment. The K1000ULE is a fully-electric, autonomous fixed wing UAV capable of carrying payloads up to 3kg. Examples of payloads include electro-optical/infrared gimbaled cameras, communications provisioning radios, cellular equipment to standup mobile phone networks and more. Advanced data links allow the UAV to send imagery from onboard payloads to multiple ground systems simultaneously, as well as relay data from other aircraft or between ground radios lacking a direct channel due to range or line-of-sight issues.

The K1000ULE is equipped with high-efficiency solar cells and a specialised battery system. It is configured to use autonomous soaring capabilities to harness energy from atmospheric thermals. The guiding principles behind the design are to provide multiple sources of energy to sustain flight, while also minimising the power needed to stay aloft. 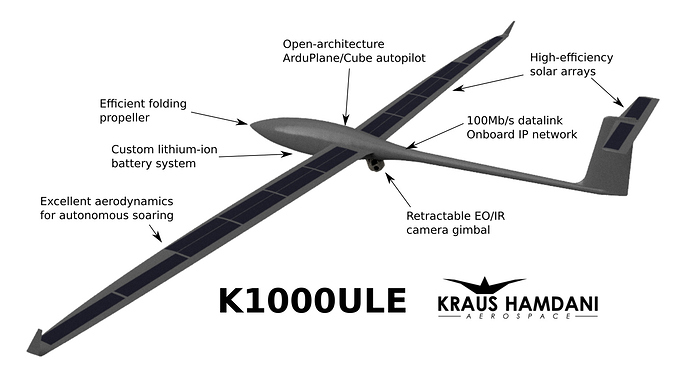 On one side of the equation, the streamlined aerodynamics of the aircraft give it a good glide ratio, and special attention has been given to keep antennas and other systems internal to minimise drag. The wing has six control surfaces covering the full trailing edge that allows for adjustment of the wing camber for minimum sink rate at any airspeed. A specially configured motor/propeller is used to launch the UAV and cruise when thermals are not available. The propeller folds against the fuselage when not in use, and is mounted on a twisted yoke to achieve the correct blade angles for key operating airspeeds. A trim airspeed has been selected through extensive flight trials for minimum power consumption. This places the aircraft rather close to the stall boundary, which can be a problem given its large aspect ratio and the turbulent, thermic conditions it frequently operates in. To address this, an automatic stall detection and recovery system has been implemented in ArduPilot. This feature can recover the aircraft from an upset condition without operator intervention.

On the other hand, the aircraft can draw on three energy sources.

The flight was conducted at the Yuma Proving Grounds test range in Arizona, US. This was an ideal location as it gave us controlled airspace up to 20,000MSL and favorable weather conditions for solar generation as well as soaring. The downside are the arid conditions, high winds, turbulence and uncomfortable temperatures at ground level. We had the use of the range until 1800 local, so to allow 12 hours of aerial operation, and to be on the safe side, we aimed to launch between 0500 and 0600. While the K1000ULE can be hand-launched, for maximum repeatability we usually use a simple vehicle mounted launch frame. Like all flight phases, takeoff is fully automatic after the arming command starts the process. This aircraft is only ever operated in AUTO, LOITER or GUIDED modes.

Very quickly the aircraft blends into the hazy sky and becomes invisible and inaudible. The flight crew retreat to an air-conditioned trailer to monitor the datalink, which is relayed over the internet to team members not on base. 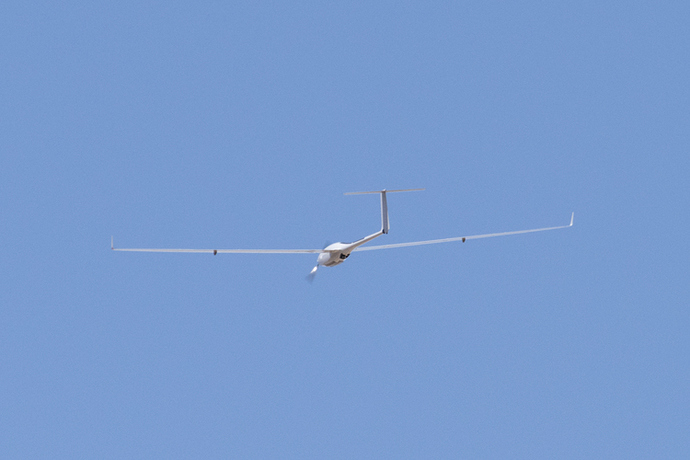 As soon as the aircraft reaches its operating altitude at 3,000ft AGL, we reduce flight speed to minimum power and enter a gentle racetrack pattern. From previous flights, weather conditions and atmospheric modeling we expect thermal activity to become significant at around 1100, and solar harvest to gradually increase to balance cruise power around the same time. During this long period of uneventful cruising flight, we monitor the aircraft systems, keep an eye on the cruising power and solar harvest, and watch the aircraft on FlightRadar24 which is possible due to the use of an onboard ADSB transponder.

Around 1000 we start to see signs of thermal activity and enable soaring. This puts the aircraft into a gliding mode to allow it to best sense the vertical movement of air around it. Soon after enabling soaring, the aircraft starts to regularly catch thermals and reduce reliance on its motor. A short segment showing an example of a thermal is shown below, with the track colored by climb rate. The aircraft - entering from the right side of the image - detects lift and gains over 500m before the climb rate reduces and the aircraft automatically decides to move on along its programmed mission.

The thermal activity begins to reduce towards the end of the day. The solar panels have charged the battery and we go back to propulsion mode for the last few hours. Timing is key when recovering the aircraft as we are required to land at a specific time due to range control time restrictions. The aircraft uses its control surfaces as airbrakes to automatically adjust its descent rate and we touchdown just a few minutes after 1800. The full flight track is available to view here. 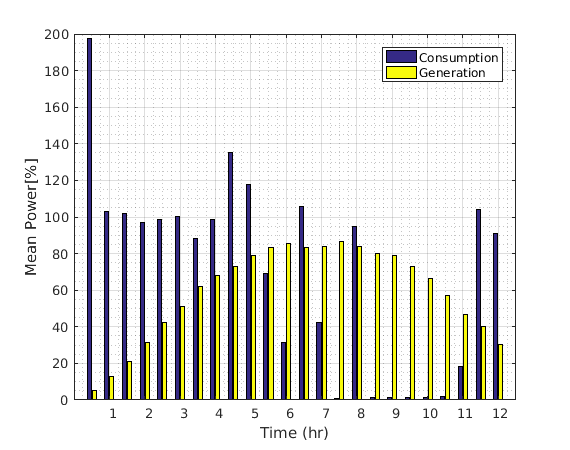 12-hours has been a major target for us to hit this year and we are delighted to have achieved it on a fairly average day for the area and time of year, all the while carrying multiple energy consumers including a high-throughput datalink, camera gimbal and ADSB transponder. A few weeks after this flight, we ticked off another milestone when we climbed and sustained operations at 20,000ft MSL, once again proving the capability of this platform.

The onboard logs from this flight give us a wealth of data to analyse and further improve the aircraft performance. Power generation and consumption of the various systems feeds back into improving our analysis models and nearly 100 thermalling episodes allows statistical analysis to improve the soaring algorithms. All this will be used as we build our next aircraft design to push to the next level of performance - multi-day endurance in a robust, field-deployable UAV carrying state of the art radios and payloads.

Many thanks to USARPAC for allowing us to share the images and data from this sponsored demonstration and to the staff of Yuma Proving Grounds for all their assistance.

You think my 8yo could win his science fair doing something like this?

fantastic project, thanks for sharing!
The soaring code really has come a long way thanks to your great work

Beautiful design and flight. Best of luck with future flights!

Very nice project. Thanks for sharing.

Congratulations Sam - a very impressive and surely challenging project.
If you need support at testing of ArduPilot I’m still available and look forward to help you.