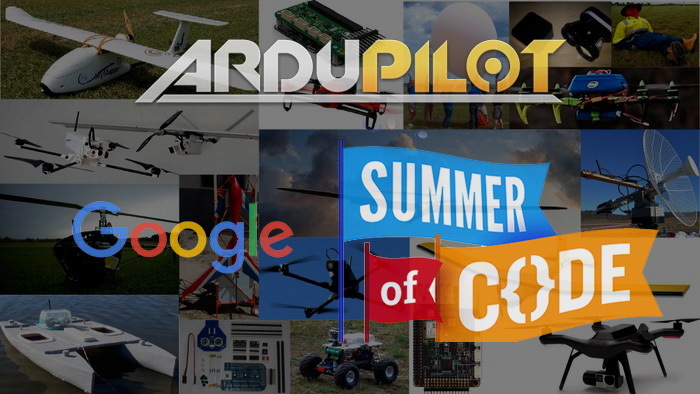 It’s official, Google has announced the Ardupilot projects selected for the 2017 season of the Google Summer of Code. Congratulations to the accepted students!

The projects selected are (listed in the same order as Google announced):

As said on the Ardupilot GSoC channel, Ardupilot received a large number of very good proposals, and the selection process was not easy. Here is some more information about how Ardupilot (and Google) went about it.

Shortly after Google announced that Ardupilot had been selected as an organization, an informal GSoC review committee was formed within the Ardupilot team, consisting of 8 volunteers. We received 52 proposals, and each was individually reviewed by two committee members and were assigned a grade. Of note is that the grades obtained were very similar, with at most a 10% difference. Scoring was based on the following criteria: Clarity of the proposal, requisite skills, realistic goals, experience in the proposal’s domain, experience with flight software, and benefit to the Ardupilot community.

Following this, the top 8 highest graded proposals were discussed and final scoring averaged from 5 reviewers. Again the scores assigned by reviewers ended up very close, and we “starred” these 8 proposals in Google’s proposal database.

At that time Ardupilot then submitted its “slot request” to Google. A slot is Google’s terminology for a project Google would accept to fund. Ardupilot followed Google’s general guidelines for the request, especially Google’s advice that the number of slots requested should be based on conservative estimates given a participating organization number of available volunteer mentors: Indeed, mentoring a student is a great responsibility and a very significant time investment for mentors, so it’s best to be conservative and be assured that all students accepted will be mentored with the attention they deserve.

Google had also informed organizations that most first time participating ones would receive one or two slots at best. Even though lead plane developer Andrew Tridgell has had significant experience mentoring GSOC students in the past, and other proposed mentors also have significant mentoring experience, it was the first time Ardupilot applied for GSoC as an independent entity. As such and given available mentors Ardupilot applied for a minimum of 3 slots, and a maximum of 5. Earlier in April we were happy to learn that Google had given Ardupilot 4 slots, no doubt based at least in part on the number and quality of the proposals Ardupilot received. After knowing this and further discussion the committee reached an unanimous consensus and selected the final top four projects.

First you should know that a non selected proposal does not mean it wasn’t a high quality one. As mentioned above there were many very good ones. And the fact that the selection was reached via unanimous consensus doesn’t mean the choice was easy. In fact it was a difficult choice for all reviewers, as several student proposals were very close in quality and score as the final four.

Second the Ardupilot team is always eager to hear from you and collaborate further. All were especially appreciative of those of you who attended Ardupilot’s weekly call, and/or engaged in many fruitful conversations with developers. We hope your interest for the project continues, and of course the Ardupilot project would be delighted to engage in further conversations and collaboration.

Finally, and of note: Ardupilot has reached out to some ArduPilot partner companies, enquiring about their possible interest to sponsor any additional students. So far the reaction has been positive. So there may one or two additional students sponsored, students who if interested would go through a mentoring process in exactly the same way as the ones sponsored by Google. We should know more about this in the next few weeks if not earlier.

Sincere thanks again to all prospective students, from the Ardupilot team and community. And congratulations to the students selected!

For next candidate and those interested on what I plan to do, you can find my proposal here https://github.com/khancyr/GSOC-2017

A big ‘‘Thumbs-Up’’ to the Developpers for having this community to take part of Google Summer of Code.
Pierre, I have read through your project and it is going to be a big value added to the Rover Branch of ArduPilot, cant wait to see the progress on this. Hopefully we will see details of the others participants here soon.

This is really demonstrating how this community is healthy; its so good to see Mentors helping Students progressing and developping great features in the code, its like a family

great! i love to hear the rover code is going to get some love. congrats to all involved!

I’m really looking forward to working with Sebastian and Pierre. Thanks to Olivier for helping us with this project!

Really looking forward to working with all of you!

Very nice of you Sriram. Thanks!