Can't Load ANY FirmWare Via ANY Method and Can't use Terminal

I am unable to upload ANY firmware to my copter. I’ve been trying for about a week now using both Mission Planner and QGround Control and pretty beyond frustrated. I need help.l

I’ve tried all combinations of the firmware settings, including selecting “copter,” “helicopter” “ignore”
“ignore” or “official”
“fmuv2” or “ignore”
“3.6.11” or “ignore”
“apj” or “ignore”
(selected my corrected com port ID) but also tried others just in case
“9” or “ignore” for board ID
“fmuv2” or “PX4 BL FMU v2”
and both firmware options, when two appear based on changing the above options.

It makes no difference. It took me almost two days to try all combinations, but I have.

I’ve also tried in QGround Control almost all possibilities, but did not try all different firmwares because there are about 50 of them listed. QGround Control gives the following errors:

I was previously able to upgrade firmware using QGround Control. In fact, it’s what started the problem when I did a firmware upgrade, but did not realize the options were below. QGround Control shows my firmware as 3.6.11 but when I use Mission Planner to install Previous Firmware, I see all the upgrades from 3.6.11 and last upgrade shown on previous is “AC 3.6.7 AP 3.9.7” So I am pretty sure the QGround Control Update firmware thing I did caused this.
What is going on?

I’ve also tried using the terminal to connect but when I do, using any and ALL combinations of settings, I get:

Did I brick my flight controller? 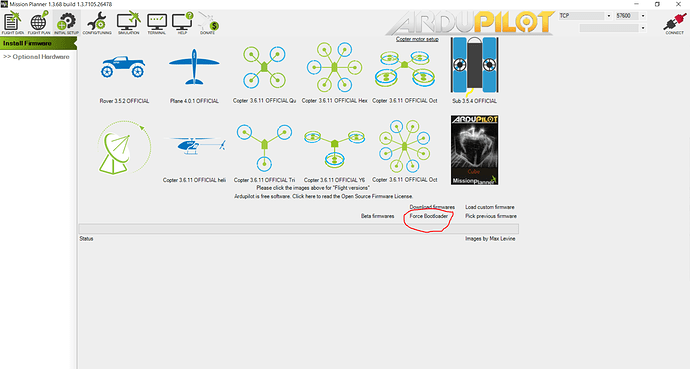 Arunabha42, Thanks for taking an interest in my post.

Un-install mission Planner and install it again. The device drivers need to be reinstalled.

Un-install mission Planner and install it again. The device drivers need to be reinstalled.

Then this is what should work.

I tried that, didn’t work. But then I tried an old version of Mission Planner to load the firmware and it worked without a hitch. I think the version was 1.3.6 for anyone else unable to load firmware and having the same issue.