Cannot get Beta Copter to appear in Firmware

Firmware screen, beta versions of Ardupilot appear for Heli, Rover and Plane but not for Copter. 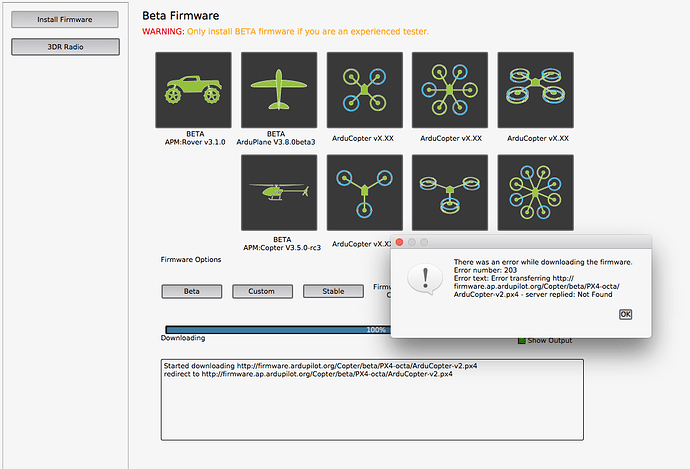 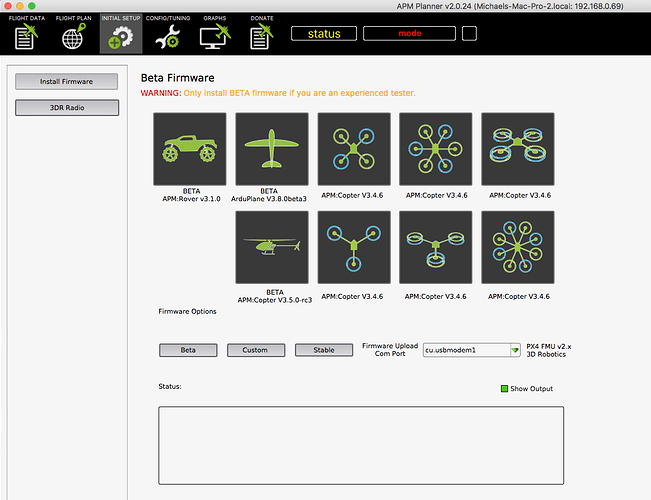 Hi Mike.
There is no beta firmware for PX4-octa.
http://firmware.us.ardupilot.org/Copter/beta/

APM Planner hasn’t been updated for the new merged copter firmware types. Looks like development has somewhat stalled, which is a shame as it’s still the best cross platform GCS, imo.

@carpy this is trying load 3.5rc3 ArduCopter which has changed since the introduction of the Frame parameters.
Now the copter code is in different directories.

@fnoop with so much going on in 3.5 it’s not surprising things are getting a bit behind. I hope we don’t lose APM Planner.

@fnoop @mboland Made a fix for this issue some minutes ago. Sorry it took that long - I am doing my very best to avoid loosing APM Planner.
BTW - the Graph View (offline logs) now supports some sort of range cursors for better analysis. Hope you like it!

Once again many thanks to the Dev’s for their tireless work in keeping all these myriad changes in sync.
Being a die hard Mac user, APM Planner is my go-to app.
Plus it has the BEST graphing facilities that use the much better user interface of the Mac.
If there was more I could do than just highlight bugs I would.

Look forward to checking out the new features.

@Arne-W Is there a source for recent/daily builds for anything other than OS X? Thanks!

Hmm - not sure - I always build by myself. But perhaps @billb knows. Which platform do you need? Windows or Linux?

@Arne-W No worries; I’m building it myself, but my GCS isn’t the fastest of machines so the build takes awhile :). I was just looking to save myself some time. Thanks!

what are you building on? if you are using the command line add -j2 or -j4 the number represents the number of processor cores you have.

There where some people creating build for other platforms, but that hasn’t been happening lately. I have an automated build server for OSX version, so that requires no effort for me on that build.