I’m using MAP 2 mapping camera from FOX Tech which trigger by the Ardupilot(arducopter)using relay method.https://www.foxtechfpv.com/foxtech-map-02-camera.html
as per manufacture instruction we should do manual trigger using push button the camera twice after power on.
first trigger will get into picture capture mode and second trigger will take one snapshot which indicate camera now working normally. again i have triggered manually one more time to check weather camera working normally.so in ground itself 2 photos saved without autopilot command
then using arducopter i have flown some area to collect the data .total photos 77 including ground photos.so here 75 photos triggered by arducopter FC.
but when i try to geo tag the images with mission planner there two different options which is CAM messages and Trig Messages . 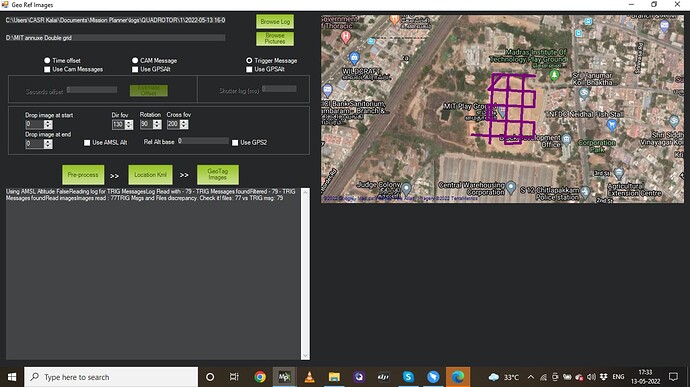 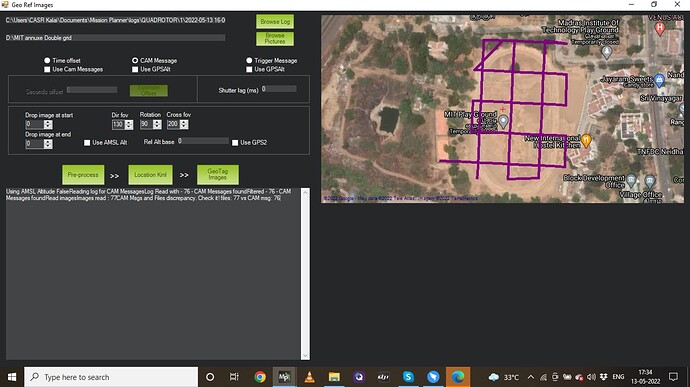 on the second image pre process by Cam messages which only 76 messages. how come that one short.
as per above statement the autopilot should have only 75 trigger information …but no where its matching how to geo tag the images .

what is the difference between CAM messages VS Trigger Messages .which one i have to choose for my application?

click use time offset, and tick Use Cam Messages

thank you @Michael_Oborne for your attention .i here tried that but still i get 76 cam message and 77 images … 2 ground image triggered by manually using push button so that should not come to an account. so Cam messages should 75 only. 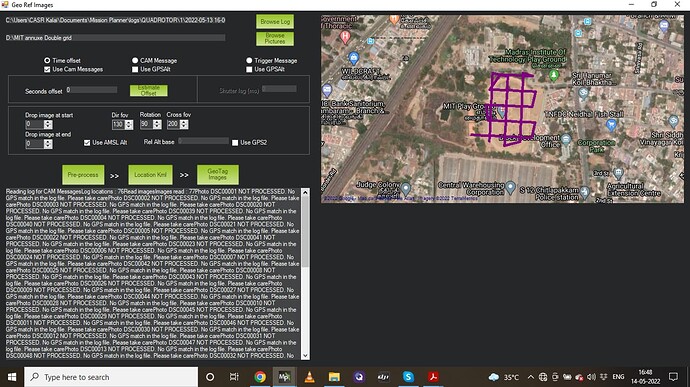 when using time offset mode, you need to click estimate offset as well, and set it to a real value

It’s a common issue, that can be happen for various reasons. Ie a cam message didn’t result to an actual photo taken due to speed or camera etc etc. On the other hand testing pics don’t count to the auto messages, thus you end up with more photos than msgs.

A clean setup with a proper cam shutter setup and a trigger feedback will give you consistent results.

Find out what’s going on:

Use a software like geosetler to check out your exifs.
Usually, all photos will have a common time interval (considering you use trigger dist and a constant speed). If you observe very unusually close intervals then your camera most propably double fired producing more photos. If you observe an unusual gap, then most probably you lost a capture in that interval.

Around 3 consequent flight which same flight speed ,same area ,same mission but out of three the second flight i got correct trigger or cam message vs images taken.
But other two flight were flight controller trigger messages higher than images taken.

But here too can message shows different messages vs trigger message.

As you said adding photos to match trigger message doesnot solve the purpose.

So, if I understand correctly, in most cases you have less number of photos, you are using some short of Sony based camera (most propably 5100 or 6000), which you trigger via relay.

The most common fault factor for this setup is the relay vs the relay time.

I strongly suggest to use a USB based trigger, such as a seagull map2 which will give you extra features and consistently pass all commands from your controller. For even better results you can use a hot shoe feedback if you have a6000 or higher (a5100, feedback is just a coupled shutter cable).

@Michael_Oborne as per your suggestion i just tried time offset with cam message enabled. i got below offset times . 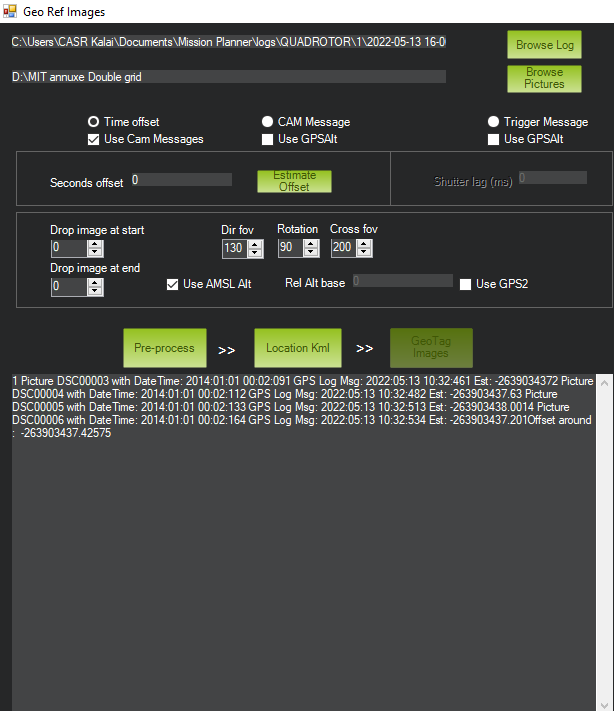 then copied those offset value then start preprocess but still i got cam messages is 76 VS images is only 75. and also see the geo locations are spread over all area with unequal intervals …this is totally wrong. 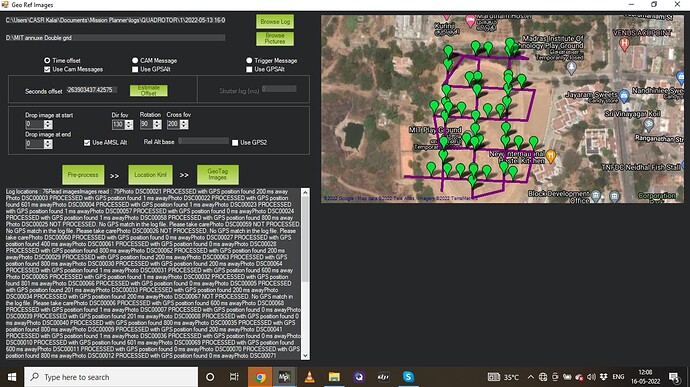 i take it the date/time on the camera was set to 2014 sometime.

Yes it’s because foxtech camera every time boot i have to set camera date and time.so i skipped.

@Michael_Oborne today i had two flight in which only changed is SD card of the camera which is Higher writing speed than previous.
both flight got 100% match images with FC messages while i choose CAM Messages option. But when i choose Trigger message again Trigger information shows higher than images.
then tried 3rd option time offset method to clarify but here also geo coordinates look like separated unequal area and distance. I have attached the screenshots here . 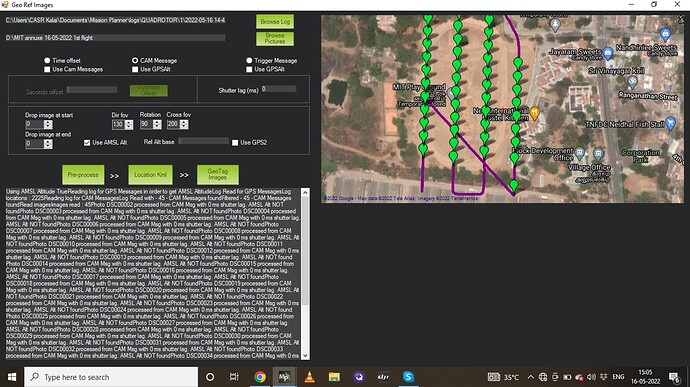 why every flight has the last photos at very long distance than other images. This i noticed in all flight .see below screen shot for reference: 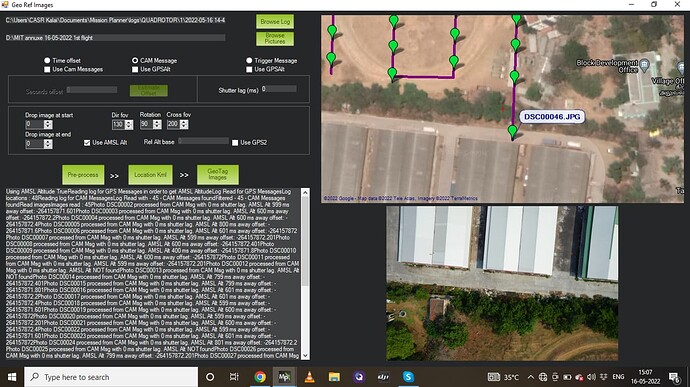 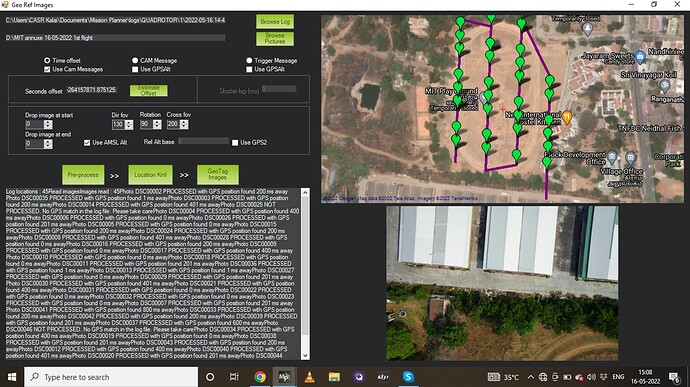 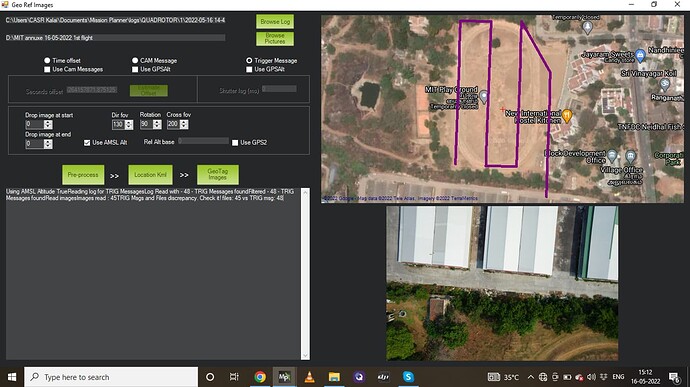 I want to ask one more thing that mission data screen shows at end of flight total message shows is 49 ,but cam image and FC message is about only 45 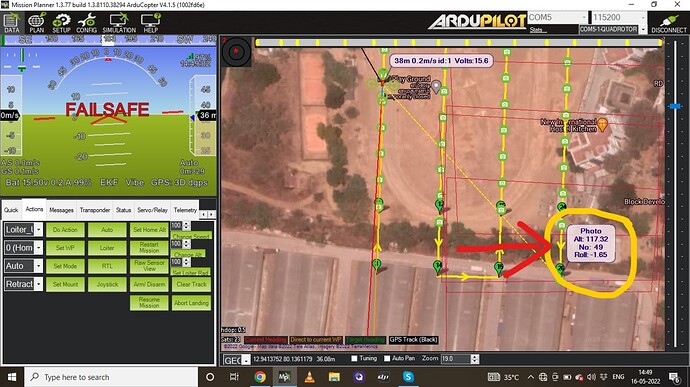 Similarly for the second flight: 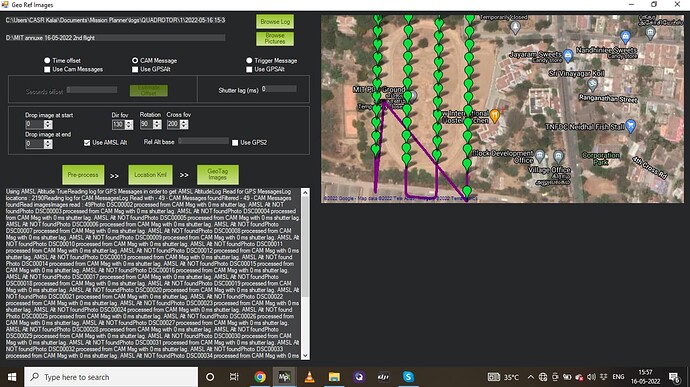 using Trigger messages i got 1 extra message than Images 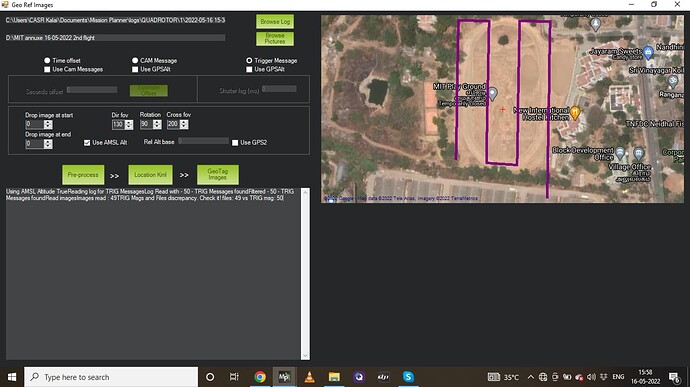 Using Time offset Method:
but this time using time offset method some how look like aligned properly i don’t know why. nothing difference from 1st and 2nd flight. 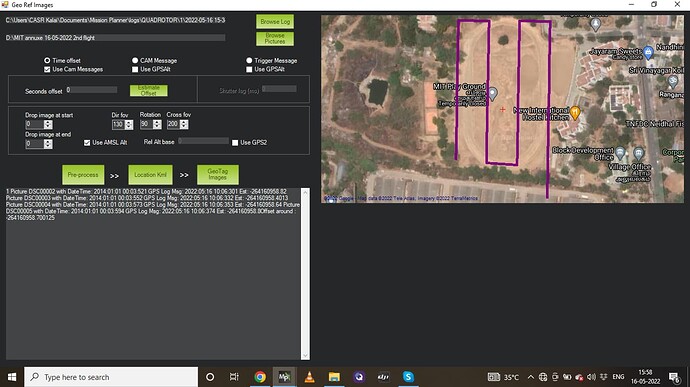 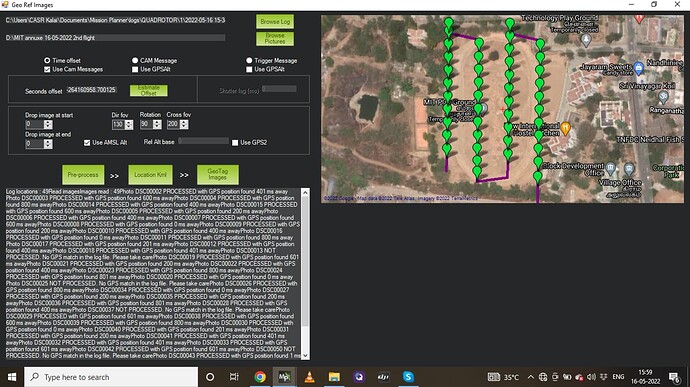 second flight DATA screen cam messages shows 50 but where as real images is 49. 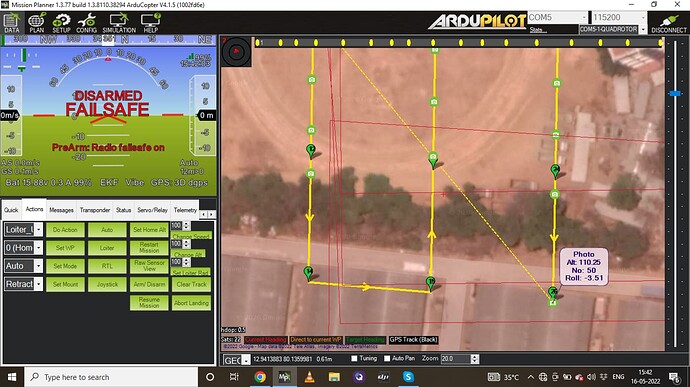 from the result i feel that CAM messages work fine but Need your opinion on this result please.

This is a constructive message thread.

I’ve been through much of these issues with my Sony RX0ii and Seagull #REC2 shutter controller.

Here’s a couple of things I’ve learned from my experience:

When there’s a mismatch of CAM messages to files, it may be easier to edit the CSV file directly. If there are too few image files - simply duplicate enough of them at the beginning or end to allow the geotag function to work. The in my case, Pix4D allows me to see where the photos and geotags are out of sync - it’s easy enough to edit rows as appropriate in the CSV geotag file to get the best results.

When there’s a mismatch of CAM messages to files, it may be easier to edit the CSV file directly. If there are too few image files - simply duplicate enough of them at the beginning or end to allow the geotag function to work.

If unknownly either front or end duplicating is major problem for the other images for Geo tagging and cause large position shift also cause whole data might wrong.

The best way to visualize the geotag situation is to load the images into software such as Pix4D that will “calibrate” the images. Consider this image from Pix4D: 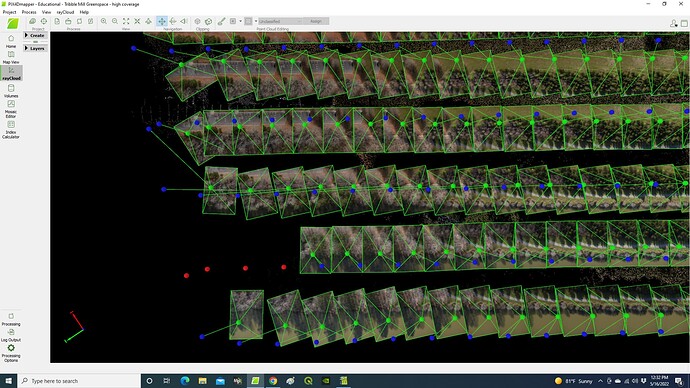 In this image the BLUE dots represent the coordinates of the image from the geotag. The GREEN dot represents where Pix4D has “calibrated” where the image really is - based on how it fits together with the adjacent images.

No doubt - it’s best to have the BLUE dots and GREEN dots to align perfectly.

Sometimes it’s possible to tell when an image has the geotag from a photo that doesn’t exist. In this case, editing the geotag CSV file is an easy way to assign the right geotag with the right image.

Also note in the image I’ve included - RED dots. The RED dots represent geotags of images that could not be used because they did not fit (matched) with the surrounding images.

I suggest you do a “rough draft” of the geotag by simply using the option to eliminate some of the images from the beginning or ending of the series. Then process the images with your software as I have shown here in Pix4D so you can visualize what’s happening.

I hope this is helpful.