Running the beta on Ubuntu 16 with the Unity desktop, no issues found so far.

I got an old Toshiba Satellite with a 32-bit T1350 cpu that I run Mission Planner on. I’d sure like to wipe Win XP out of that thing and put Debian or Ubuntu on it. But it appears the latest builds for APM Planner2 are 64-bit only. If there’s a way to run APM Planner2 on a 32-bit linux system, or somebody has some pointers on what flags to change to build it from source code for 32-bit, I’d do it in the blink of an eye. I’d like to use that old Toshiba for my Ground Station, but I find Mission Planner to be too cluttered for my liking.

Oh, OK. I didn’t realize that and thought (or assumed) maybe the code was optimized only for x86-64 in the later versions. I’ll load Ubuntu on that old Toshiba and give it a try. If it works I’ll be a happy man

Thanks for that info.

It’s optimized to be both 32 or 64. Just 64 will be faster for double precision operations

I put Ubuntu 16 on that old laptop and I cloned the github repository with git. But it appears I got 2.0.20. So I didn’t do the build yet. Now, if I want to run the latest beta on this 32-bit machine to test it, I assume I can’t install the 64-bit build for Ubuntu 16, and will need to build that from source on the 32-bit platform. Where do I clone the source for the beta from? I looked thru all the directories on the server and it wasn’t immediately apparent to me where to download the beta source code package from.

You can clone the source from here,

Thanks carpy. Got it, and once I make sure the dependencies are taken care of, I’ll build it and see if it works.

Well guys, for some reason my build on my 32-bit machine exited with the following error, and I haven’t figure out yet how to fix it

Did you have any issues when installing libsdl1.2-dev or libsdl2-dev?
You should see SDL and/or SDL2 in /usr/include/.

Yeah, there was libsdl2-dev missing. And then on the second attempt I found libsndfile1-dev missing. On the third attempt I got a valid build. Fired up APM Planner2 from the command line, everything works, stuck my telemetry radio in the USB port and connected to my quadcopter with it.

I have a question though - since I built the .deb for a i386 cpu platform, should I upload that to someplace in case other people want to install it easily on a Debian-based system? Or is there not enough call for 32-bit builds?

I tested installing the .deb on both Debian 8 and Ubuntu 16, and it installs and runs fine once you install the dependencies.

Thanks for the offer Chris. I think it’s a pretty low number of people running on a 32-bit platform like yourself. You might be the first to ask in the last 2 years…I can’t remember very well though…

OK, carpy. Thought I’d ask, just in case. For me, it’s an old laptop that had WinXP in it, but the laptop has a new battery. And it works great. Linux breathed new life into it and it’s ideal for carrying out to the field for flying instead of taking my newer (more expensive) laptops out there. So if anybody wants that 32-bit .deb don’t be afraid to ask. I got a personal server and I can upload it to that where it can be easily downloaded for install on a 32-bit Debian-based system.

The same Core2 machine running the 32-bit build with the identical widget set and connected to the UAV with Mavlink: 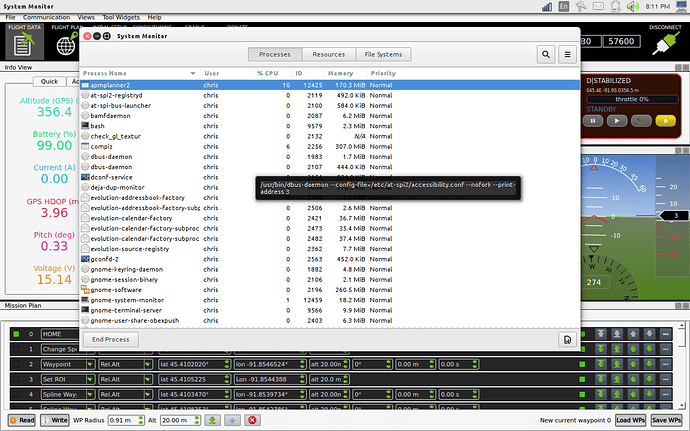 Very cool. BTW, did you notice a memory leak on any of the platforms? We have a little one, but we don’t think it’s that big of an issue right now.

Very cool. BTW, did you notice a memory leak on any of the platforms? We have a little one, but we don’t think it’s that big of an issue right now.

Not really. I mean, I run it on an old 32-bit laptop that only has 1GB RAM in it, and I have yet to see it dip into the swap memory even on that one after an hour of run time. There’s some applications like the Firefox web browser that have serious memory leaks. If APM Planner2 is leaking some mem I’d say it’s in the unnoticeable class, where an app like Firefox is in the serious problem class.

Thanks for the offer. Could you please share the link where I can get the 32bit deb file?

I need to install it on a netbook so I can calibrate compass away from home. Too bad the android tower app doesn’t have this functionality.

Hi calvin,
It is here on my personal server:
http://chriskristin.dlinkddns.com/ArduPilot-Builds/APM_Planner2/