Building a quad frame on the basis of topology optimization

In some way this blog is inspired on the very excellent job that did rob215x Robert Giordano in his post building a better quad frame and how to build the lightest ardupilot microquadcopter by Hugues. I must say that I won’t be able to make such nice video intros, but I will try to do my best with FEM and Engineering design.

What is the aim of the Project?

Topology optimization is a numerical method that optimizes material layout within a given space and within given loads and constrains to maximize the performance of the system (usually, the best relation between stiffness and weight). Let’s see an example. 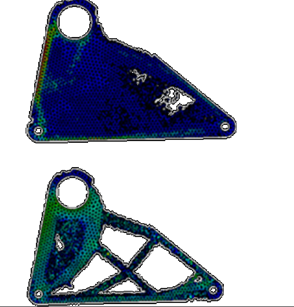 This kind of magic is nice but it is not so easy. First, the result could be difficult or much more expensive to manufacture. Second, this method is hard for computers. A small part takes hours to get a result on an average computer. The result is mesh dependent, and also variations on loads or constrains could show different or inaccurate results.

It would be great to bring this technology to the frame design, wouldn’t it?

The first step is to design the maximum available space, so the computer has the possibility to use material anywhere. The blades produce a design constraint. To minimize the constraint a four blade propeller should be better, but efficiency should be worse, so I think I will use three blade propellers. Distance between opposite motors: 150 mm. (But should be scalable as smaller is lighter). 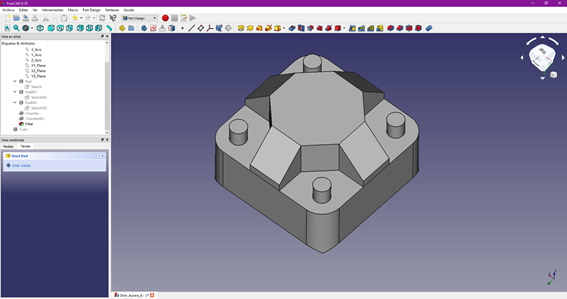 This block is conservative, as I can be sure that no material outside this container would help to increase rigidity while lowering weight.

Topology optimization is very dependent on mesh quality and element size. Due to hardware limitations, I can only choose maximum element size of 4 mm. for a tetgen mesh. 2 mm. could give more detailed results, but my computer can’t stand it. 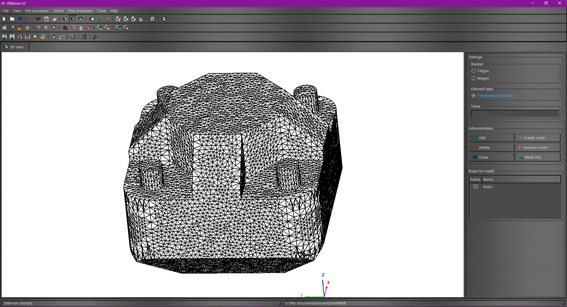 With these data, the computer can make its calculation. For this model took about 17 hours, and we got…

Next level: From design to reality

I like this kind of approaches. When I watch your video, when you rotate the model, I am seeing resemblance with a medieval 4 candle holder, swinging on a chain in a medieval castle, while the knights are having their dinner at the round table underneath. Just kidding, but I also like how your model has interconnections between the arms at the end, and the support structure under the motors. My intuitive mechanic insights tell me this could be worthwhile following up on.
grtz
John

For topology optimization you should go with the maximum size available so the material follow where the forces are transmitted. I have been conservative in this way, (if you watch the first steps of the optimization, the outer part of the block is removed) so a thicker block would give the same result.

A thinner block probably would lead to a more triangulated truss design.

I was a bit surprised because the result was quite simple and quite easy to manufacture. One of the problems of topology optimization in engineering is that the results are optimized for the material but more expensive to manufacture.

Thank you for your interest.

Andres, whats your guess on resonance and vibration on this outcome. If I understand the process correctly, it uses force / strength optimization with minimum material. Which I would guess gives the optimum stiffness with minimum material. Seen the outcome, I think the frame resonance and vibration which is hindering most of us could be of a another universe with such frame.
Just some reflections, grtz
John

ps: I would be curious what a hex would look like, but I assume similar candle shape, wondering how the arms would be connected on the bottom part.

Which I would guess gives the optimum stiffness with minimum material. Seen the outcome, I think the frame resonance and vibration which is hindering most of us could be of a another universe with such frame.

Yes, this is exactly the aim of topology optimization. As this frame is feasible, I will go on with the project. My next step is buying the components. Probably:

Then with the exact components I will make two frames. One 3D printed with ABS and the other one with small carbon fibre tubes for minimum weight.

As you have asked, once its done, I can try to figure out the natural frequencies of the system.

As far as I know, frequencies arround 8 Hz are bad, because the foam of the FC can’t absorb them.In a quad, there are also vibrations with a frequency of 3x the motor speed. (three blades). So, I am pretty sure (although I have not calculated yet) that both numbers would be far enough from the natural frequencies of the system, so I don’t expect any issue with vibrations.

Part II: From design to reality

Too much time later I had some time to work again on my project.

I 3D printed the arms with ABS and glued the low square with carbon fiber tubes. 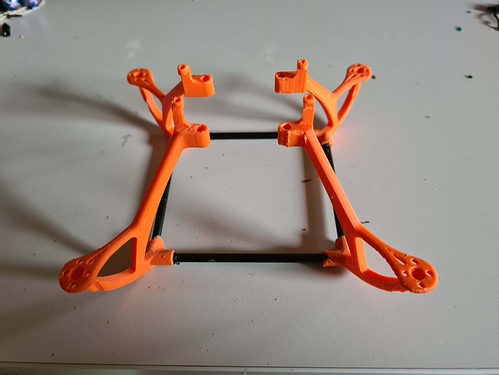 I was not completely satisfied with the printed part details, specially around the holes, but it was good enough to keep the dimensions and build the components. 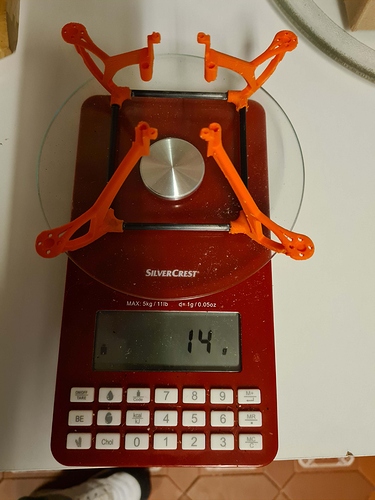 Each of these plastic arms weights around 3 grams which is a great result. Ihave some spare parts to check the mechanical resistance, but I guess it is high. 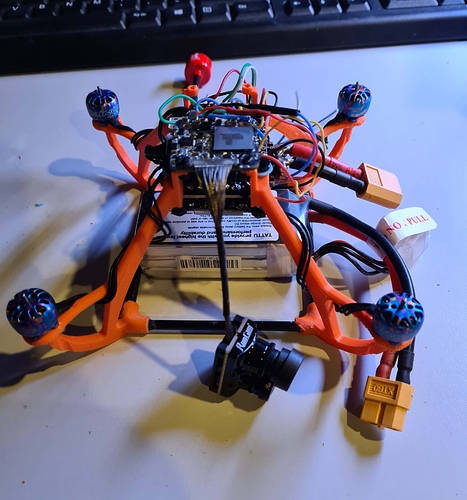 I will try to keep the cables tidy, but all my drones look like flying wires.

Some more pictures when finished…

This copter could fly well, but I think it could be improved, so I changed the main diagonal arms with a carbon fibre arm. The main frame was 14 g. but the new one is 10 g. It is only 4 g. but it is a weight reduction of 30 which is a lot. Also the stiffness and strength have been increased.

Finally the weight has been optimized. Even if the main goal was a copter below 250 g. I also wanted some nice staff such an Hybrid Run cam mounted on a servo to change the view angle, and a TF Mini, and finally… 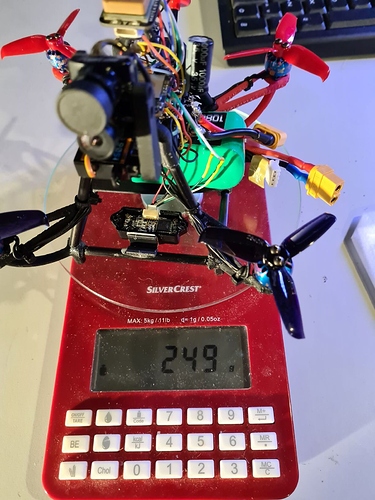 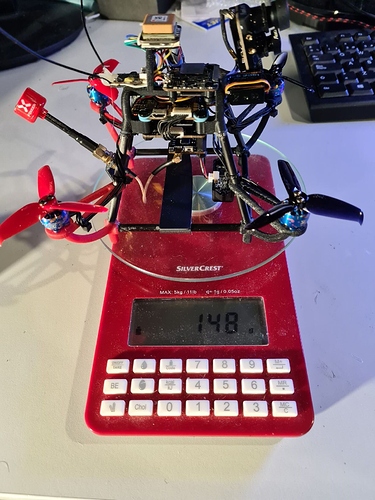 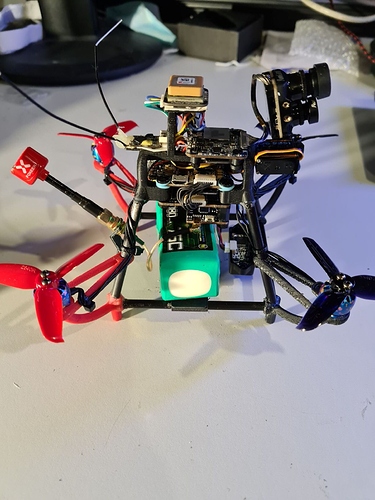 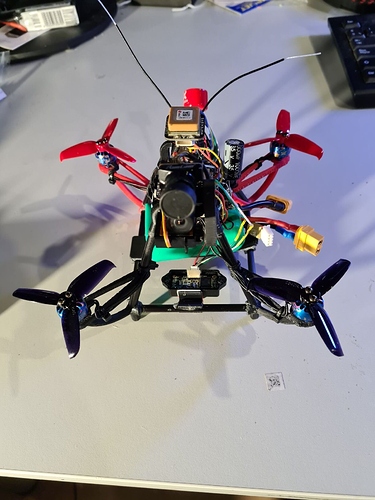 This copter will made its maiden flight the first of january.
Let’s check vibrations and handling…