There is a minor bug in AP_Hott_Telem.cpp (Copter 4.0.4dev), probably because of a faulty Graupner documentation:
the gps_fix_char has to be the 3rd last byte in the GPS message, so the correct code is this:

Can you submit a PR to master, please

Also, if you could help adding the other sensors would be great.

Hi @LuisVale ,
First: Thanks a lot for implementing Hott in ardupilot. The code works well and is well written, good job.

Can you submit a PR to master, please

Honestly, i don’t know how to do that …

Also, if you could help adding the other sensors would be great.

I don’t think, the other sensors are neccessary. The microcopter display works, and that’s the main thing.
On top of my wishlist would be: Making Arducopter parameters editable via textmode !

I’ve created a PR with @fs007’s changes in it here: https://github.com/ArduPilot/ardupilot/pull/13873

Is someone able to test that PR?

can you should a photo of the result before and after this change?
also, what receiver and transmitter are you testing on? 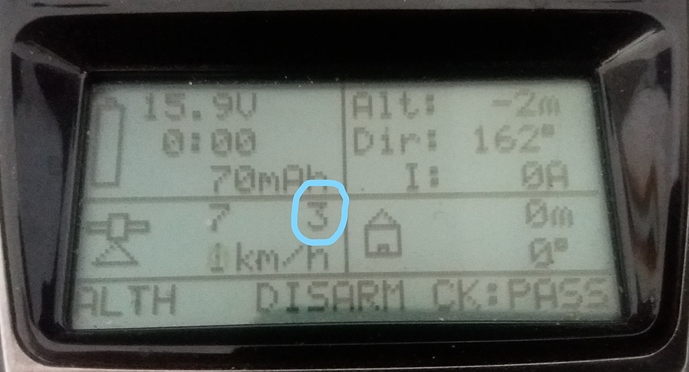 Here is a photo that shows the character AFTER this change

Thanks! We’ve merged the fix into master. Please test and confirm it is good

Yes, please do this change. The documentation was correct, but for any reason we did implement it wrong.
On the mz-32 which I use, I can’t see the mistake, because it does display the 3D fix itself.

Sometimes it’s important to wait for dgps before arming.

In fact, the existing code doesn’t do that and RTK mode isn’t handled well also.

I would suggest something like this code (beginning line 279):

Again, I’m unable to test that patch myself, apart from, “does it
compile?”.