Hello all, I hope someone can help me find the reason for this crash.

Upgraded the controller from V3.3.0 to V3.5.2.
Only problem I had during setup was with the accellerometer calibration - MissionPlanner never responded with “…Place vehicle level and press any key” (I saw a similar issue from another poster recently).The controller had previously been successfully calibrated with V3.3.0, so I skipped calibration, hoping the the old calibration would still be good. Everything else seem normal, so I had big hopes for the new FW.

So I went to the flying field to make a “firmware maiden”. Earlier with V3.3.0 the plane had been well tuned and flying good in all modes, including Auto mode with AutoTakeoff and waypoints. I also wanted to make a fresh AutoTune just in case the new FW with EKF would perform evenbetter with different PIDs.

AutoTakeoff was uneventful, as usual. I am a lousy thrower so this function is helping me a lot. Switched to AutoTune mode and performed both roll and pitch tuning. Bixler behaved like always - stable and easy to control even in some wind and gusts. Also tested flaps to see if programming a little bit down elevator in the TX was functioning.

All went well until I decided to land. During downwind leg, in FBWA mode, about to turn for landing, the plane lost som height. Knee jerk reaction made me throttle up and increase up elevator. Too late I realised the plane was not responding, and no time to switch to Manual mode the Bixler crashed behind some trees.

First I thought the elevator horn or link was broken, but looking at the log I don’t think that is the case (the horizontal stabiliser was ripped off in the crash, so could not be sure). I am not so good at analysing logs, so if someone would take a look at the enclosed screen grabs or maybe download the log file, I should be very grateful!
NOTE: I don’t blame the firmware for the crash as there are so many things I could have done wrong. The vibrations in flight (especially accZ) are horrible, not sure how much that comes from wind and AutoTune though. At the end, after the crash, the mode was switched to RTL (maybe by me in the confusion), as a result throttle went to 65%, and the accZ value looked almost normal - prop well balanced 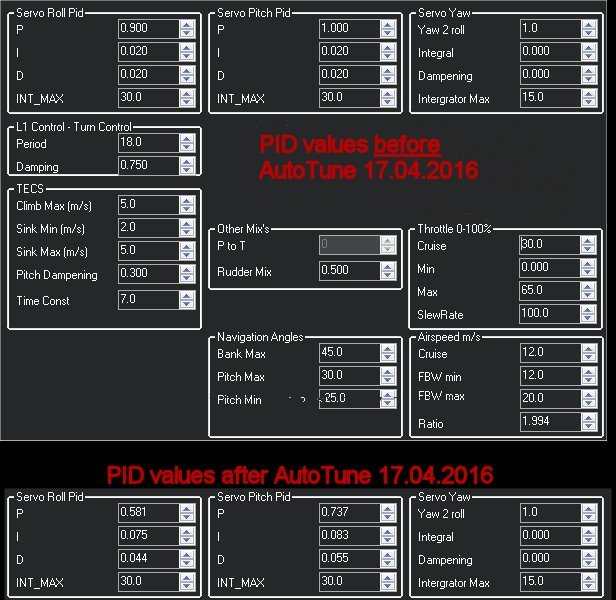 Hello, I’m not an specialist, and my knowledge is more or less, basic, but anyway here my thoughts…

So, my conclusion is: It was your fault =(
Advice, never fly near to the ground in FBW modes, I used to do it in stabilize or manual since the plane response is by far better.

For you to enjoy-> here you have another spectacular crash, this is me with my bix3

Thanks for helping me learn from my own mistake

I agree with you on almost all your statements, especially what you say about the tuning results.

I have not had time to do any further analysis until now, but from the log I can see something that may indicate a mechanical failure on the elevator rudder (horizontal stabilizer).

This is what I have found:
During the final part of the flight in FBWA mode, which lasted for more than 2 minutes, I felt I had good rudder control both in roll and pitch. From the log we can see (attached) that I made 5 or 6 180° turns (the blue curve). The pitch curves may indicate weak authority, but it felt good until maybe 50 meter before I was going to turn 180° for final. With a speed of 15m/s it was not much time to react, and of course I should have switched to RTL or Manual mode. Note: Pitch up for both RCIN.C2 and RCOU.C2 corresponds to lower PWM.
Have a look at RCOU.C2 between the 16min mark and RTL (crash moment). The controller responded to my “panic pitch up” command immediately, not much, but much more than any of the earlier values. The same sluggish behaviour we can see earlier in the flight between 14-16 minute marks - the controller reacted with small corrections from my violent stick movements, still I experienced good (enough) respons. I guess that is why it is so easy to fly in FBW modes, even in strong wind.

If any of the above makes sense, there was nothing I could have done except make a better preflight check on servos, links and rudders. By the way - all servos tested OK when I got home.

There may be other explanations. I am still not happy with the IMU Z values, and wonder if that is/was a problem during the flight, and if it will bite me later. And for sure I shall also perform another AutoTune - it was really too windy that day to get an optimal result.
Hopefully others also may tune in - we can all learn from own and others faults. I still do not blame the FW! Yet

Ordered a replacement spar from China, received it a couple of days ago. Broken!!. Still waiting for a new one…

Regards Jan - and thank you again for your response, far from Norway!
(Nice crash you got there by the way, I saw it recently linked on RCG).

I saw your video again. I’m not sure when you react to the plane. From the place you where it is not easy to discern how close to the trees the plane is… anyway, if you feel that a “mechanical failure” makes you happy, then it is good!! hahahha. Bear in mind that the FBW modes gives you a very limited response.

There is something I noticed that could be usefull for you. During the autotune session I noticed the plane jumping and rolling pretty fast. My experience with autotune is also limited, I did two times… I tried to stick to the manual:

I think that the controller, measures the “step response”, this is a known method for controller tuning. The controller needs a jump input from RC sustained for a while (let´s say 2 seconds) and then you return stick to center and go again.

This is my recipe. It doesn’t mean that is the correct, but I’ve got a rock solid compensation. Probably too much, because in windy days I observed the plane rock solid leveled, but I hear the servos fighting too much, I would prefer to observe the plane not so quiet and less servo actions.

I had another look at the crash log. This time I focused on both the outcome of AutoTune and the last appr. 4-5 seconds of the flight, derived from the time stamps on the log.
After the AutoTune, I took a few circles around the field to get the feel of the aileron and pitch responses. The last part of the video shows a few low passes, reflected in the first image below. The height varies a lot, partly because of me testing response and partly because of the blustery winds. I shall be very grateful for any comments on the two curves “CTUN.NavPitch” and “CTUN.Pitch”. Does it indicate a bad tuning, or something else? I rekon “CTUN.NavPitch” is the commanded pitch from the controller (from my stick input), and “CTUN.Pitch” is actual pitch movement on the plane.
The second image shows a little more detail on the time line at the end. In the video you can see a height drop around 3:05, that is where I have marked “Loss of control” on the image.
Links to the log and video in my first post if anyone want to take a closer look, hopefully finding the real cause of the crash. The jury is still out, I think.
Thank you in advance!