By telemetry, it seems like RC malfunction/glitch (Turnigy i6 and reciever iA6), C1 and C2 cross each other to max/min values (as shown in the log). But other channels seem to work OK. Distance from copter was less then 100m and in line of sight. 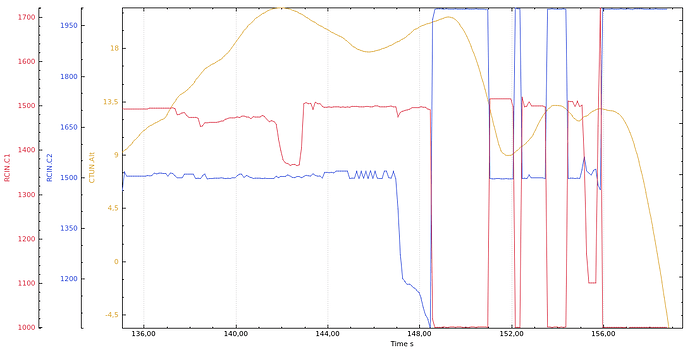 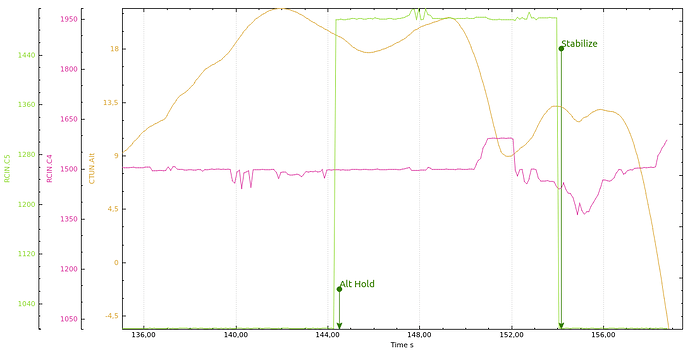 Any idea what could cause the problem?

(Disclaimer: I’m a fairly novice Ardupilot-er, but any free opinion is better than no opinion!)

I notice what looks like 4 separate lost-link events in the C1 and C2 plot. (3 of them recover, of course)

I’ve never used Turnigy, but the Futaba RX that I fly have programmable failsafe conditions. In a lost-link case, the receiver commands the pre-set values for all channels. So if your failsafe condition has C1 at 1000 (standard “min” value) and C2 at 2000 (standard “max” value) then lost-link events explain the plot, and possibly the crash. If you haven’t modified your TX and/or RX settings post-crash, you can test this hypothesis.

As for what caused the lost-link… I might speculate just for fun.
Idea #1: can you view the CURR and/or POWR in the log? Maybe find evidence of a brownout or blackout? ESC# logs might also show if there was some internal power issue?

(crazy) Idea #2: You said you impacted a power line? Would a high-current power line be able to interfere with nearby weak radio signals? That might explain the lost-links, but I would expect the radio link to recover as the quad fell away from the lines. (So I don’t particularly like this idea.)

Come on- you must realize that?

Can you post the log please, much easier to help if the details of what happened internally are there to see.

Interference with powerline is imo unlikely. In the moment when control was lost, copter was reasonably far away. Copter just accidently flew exactly to the side with the powerline. Besides my old chinese toy copter never had an issue and my wifi goes thru the powerline and signal loss is minimal.

Brownout is somehow possible, Volt was 9.6V (which is weird, because my radio has battery voltage telemetry connected to balance connector and alarm set to 3.45V/cell and I’m pretty sure it did not sound). But radio has independent 5V from regulator, so it should suffer brownout at the complete discharge of battery. And telemetry Vcc is 4.8 which is imo OK.

BUT battery was fully charged in the morning, first flight took around 4 minutes, and then it crashed after just after minute of flight. So maybe battery is dead?

Thanks for the failsafe check. Yeah, that sounds like standard settings. Unfortunately that rules out my guesses, so… I don’t know.

tags in someone else

Looking at the logs, you seem to have run out of battery.
Although you are not logging current, your voltage at the time of the incident dropped as low as 9.2.
When a LiPo reaches 3v per cell there is no useful current left.
So I am more surprised that the copter did not get unstable and crash before that.

Would have been helpful to have the current logged and also the motor out.

Thanks a lot for help, yup, it looks like worn-out battery.

But i’m suprised anyway, i would expect something like loss of lift or esc sync loss, not such radio glitch (since radio has comparably low power consumption and has own voltage regulator).

Loss of power usually means loss of stability and controllability.

The copter needs a reserve of current to increase the power out to particular motors to keep you stabilised.
For instance, if an arm drops and the FC commands an increase in amps to that motor, and the battery can’t deliver then that arm cannot be brought to level (or the commanded angle) so there is a delay which causes further instability.

It can start with uncontrollable wobbling and even end in a flip.

All from lack of current.

So I did not see any radio glitches from the Rx, just very low battery voltage.

OK, thanks a lot for explaining.

Actually i finaly found out the cause of the problem!
It wasn’t brownout, it wasn’t loss of signal, nor failsafe. It was definitely NOT a problem of APM hardware/Copter firmware.

Connector of right gimbal on the transmitter was a little bit oxidized. In warm weather, contact was OK, no problem whole summer. BUT now, temperatures dropped again and the same problem was replicated - luciklly on the ground. Ground wire of gimbal potentiometer disconected (those glitches, where C1 goes to 1000, C2 goes to 2000) which tilted copter so much it could not maintain altitude and crashed.

But thanks for suggestions anyway.
Cheers, Martin.