are you guys notice any difference by mounting the FC in front near the gas engine or over the tail boom joiner? I’m not sure where to install my pixhack V3x unit…

any advices are welcome

I have only ever mounted mine in the front. I’m about 300mm in front of the main shaft and I haven’t seen any issues yet. My new scratch-built design will get the autopilot closer to the main shaft, probably about 150mm away, except this time behind it.

I have it mounted 15 cm behind the main shaft and no issues.

Thank you all! I’ve asked because I noticed the other day more or less vibrations with same setup and values just by placing the FC on different positions. Machine was the Century Gasser Typ.

How about the Pixhawk 4 mini? I’m confused about IMU dampening as I read my pixhawk cube have just one dampened IMU. Pixhack V3 is equipped with 3 dampened IMU. Did you have some information about Pixhawk 4 Mini?

I’ve seen those, but I don’t know much about them. We went with the V3x and they are superb for helicopters. So that’s what we’ve stuck with.

Yeah, the control is not the problem. I’ll use Acro before I’ll use Loiter. And I’ll use auto if the flight track can’t be determined visually. The FAA is the problem, and whether or not you are dropping in your restricted area drop zone.

The FAA takes a very dim view of dropping anything heavier than a piece of paper at cruise speed unless you have a very large restricted area for the drop zone. The regulations also include towing banners that are dropped before landing with either fixed or rotor wing aircraft. Doesn’t make any difference if it’s manned or unmanned.

All it takes is one phone call to the FSDO, “hey, there’s somebody dropping stuff from helicopters” and a couple inspectors will be there as fast as they can fire up their Citation 500 and come to check it out. When they show up you’d better have all your ducks in a row.

Hobbiests can drop stuff from RC aircraft at an established RC airfield, or at a place where “reasonable precautions” are taken to prevent injury or property damage. But not commercial. You have to hold a Part 135 with waivers to some paragraphs, a Part 137 (for ag) and a waiver to Part 107 via Section 44807 for unmanned to carry anything for hire, much less drop it from the air.

I’ve been Chief Pilot on our Part 135 for 31 years, and even holding the Air Carrier Certificate it’s still a lengthy review process to get any waivers for unmanned, and the only one I hold is for dispensing liquids from the air for ag. And that also requires a Part 137. The FAA does not care if it’s manned or unmanned, the regulations are the same. Part 107 is for aerial photographers.

I don’t know that I’d recommend velcro, but I have never used it for a flight controller.

Velcro works excellent. It’s all we been using since we went to the V3-series controllers. The stuff can get wet and it still works. Doesn’t have any foam in it that deteriorates with age. If the controller is mounted in a location like it is on our 766’s where you can’t get to the USB port or SD card, can simply pull the controller out to get to it. Just have to check the leveling of the AI after re-installing it.

When it comes to sticking stuff on, for pete’s sake velcro holds the tonneau cover on my truck. When I’m riding my motorcycle it holds my boots on, it holds my riding jacket on, holds my gloves on, holds my GPS to it’s mount on the handlebar. And when I park the bike and put the cover on, it holds the cover on it. When I go someplace and have to haul something on the bike that’s going to be strapped to the pillion or the luggage rack on the trunk, I got velcro straps to hold it on there. Nobody uses bungee cords anymore.

In fact, on the helicopters I got velcro straps that hold the aux fuel tanks on. And velcro sticks the flight systems battery to its tray.

We even got cat named Velcro because ever since he was a kitten that cat can stick to just about anything and it sounds like velcro when you try to peel him off it.

Edit: Just realized another thing with velcro on the helicopters. The FPV cameras are stuck to their mount with a 1" square piece of velcro. Whoever invented it was a genius.

I get it… it can hold stuff together. I am just not that keen on using it keep the controller stationary. There is still a little give in there especially if you are pull it on and off. After time it gives more and allows more movement. and once it loosens up, the controller will get bad information as it is not staying with the aircraft movement. If you think it works great then more power to ya. Like I said, I have never used it and probably won’t. Just my thoughts.

Bill,
again I have to agree with you.
I tried and it was a bit to wobbly and it showed in the vibration values.
Than I fiddled a bit and just pushed a bit of hot-glue in between and it worked. I never intended to leave it like that but it is not moving and the FC is perfectly level when the main shaft is perfectly vertical.
It looks a bit dodgy but I have done missions with it and the Heli flies as a dream.
I just took a picture for you so you can see what I mean. 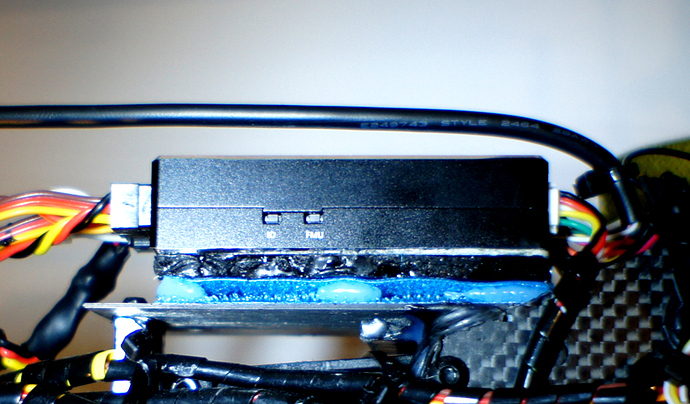 I tried and it was a bit to wobbly and it showed in the vibration values.

I think there’s more than one way to accomplish the desired result. Because if you ask another person they might tell you you need foamy blocks on the corners, some sort of heavy plate underneath it, and hang a couple ounces of tires weights on it. There’s no way double sided sticky tape is gonna work.

Look at all the stuff on the wiki - they don’t want you know anything about what the helicopter is doing. Put the controller on Cloud Nine and let the helicopter shake, rattle and wobble. None of it matters with the Cloud Nine Mount.

Some progress on the new design: 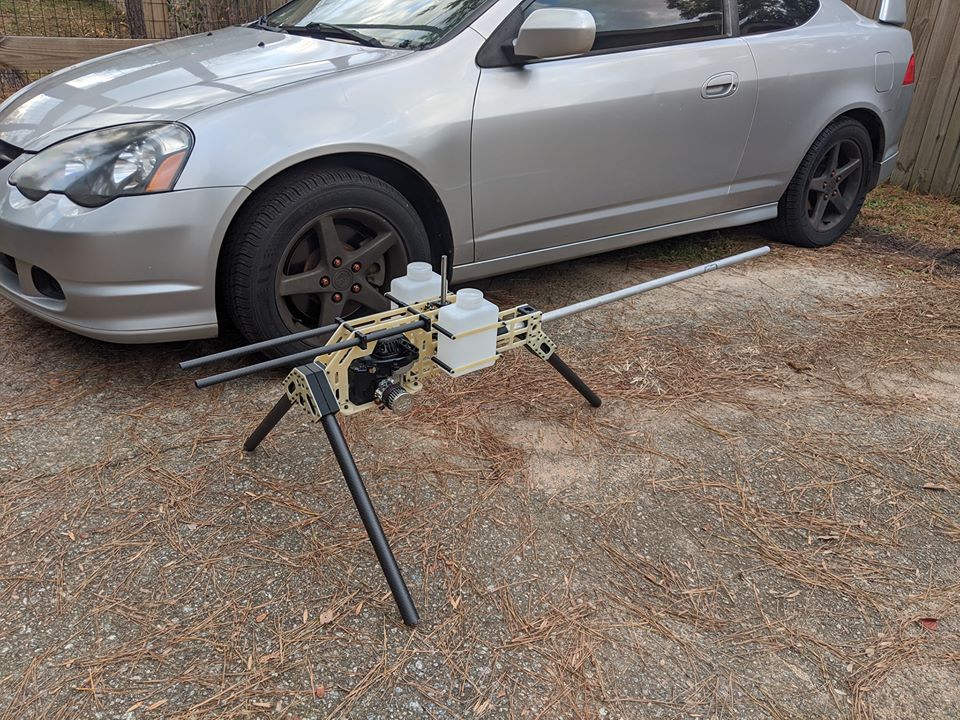 Seeing love is very good, go ahead, come on!

Some progress on the new design:

What do you do about autorotation landings on rough terrain? That’s the only problem with moon lander feet on a heli. In theory can spot-land one in autorotation. But in practice they are usually 1/4 to 1/2 mile downrange and a successful autorotation results in a considerable run-on, usually 12-15 feet before it comes to a stop.

Too much danger in stalling the rotor with heavily loaded UAV’s, attempting a spot-landing because you need minimum 20kts forward airspeed just to maintain headspeed at a descent rate of 1300-1400 fpm with disc loading 1.1 lb/ft^2.

We teach our pilots to simply flare and land it like an airplane - don’t attempt to stop it and spot land it or you’ll run out of rotor speed, stall it, crash it and tip it over. If the pilot gets the descent rate down to <500 ft/min at touchdown going 15-20kts it will slide in the dirt and survive just fine.

I’ve considered exactly that.
I thought about adding skis or possibly wheels to the main front legs and make it like a UH-60 or AH-64.
Unlike you, I don’t fly this commercially. It is just a hobby project for me, so it’s rare to have my helicopter heavily loaded.
Luckily if I ever do hit hard, the frame feels like a tank compared to the stock Airstar frames. And it’ll be as simple as swapping out the carbon landing legs with easy-to-find (and super cheap) multirotor carbon tubes. Obviously if the rotor touches the ground it’ll be a different story, but I’ll cross that bridge when I get there.

I’ve considered exactly that.
I thought about adding skis or possibly wheels to the main front legs and make it like a UH-60 or AH-64.

I never tried wheels yet. I think that work though to prevent the front gear from digging in and flipping it over. I don’t really care about landing gear damage in a rough auto landing - landing gear is easily replaced. It’s the main rotor blades that have to be prevented from a ground strike. The last auto landing I did in a soybean field when the engine quit wasn’t the greatest. The helicopter hit the ground pretty hard and it partially collapsed the gear, about a 20 foot or so ground run. But the heli didn’t tip over or damage anything else. So the landing gear did its job it was designed to do. - absorb the impact and keep the helicopter upright.

I actually changed my tripod gear to a traditional skid gear afer seeing that.

Skids work. There’s a reason full-size heli’s got 'em if they don’t have wheels.

Spot auto landings are great if the helicopter is in good visual reference range. But the engine never quits in those situations for some odd reason. It’s always when it’s 1/4 or more mile away. The danger in stalling the rotor when you can’t judge the height very good is having it drop, bounce and then with no cyclic control it tips over. When the blades hit it breaks pitch or swash links the blades lag and hit the tail boom and blow it all apart. I’ve yet to ever damage one simply flying 'er in like an airplane and let 'er slide when she hits the ground.

I’ve had my share of 'em on survey flights. Two seized engines and a blown clutch in the Trex 700 (3x with that one), busted motor shaft in the Trex 600, seized engine in the GX9, in-flight controller reboot in the 766. Not a single one of them closer than 1/4 mile away.

Back to my original question,
now that I’m starting to outfit this 2nd helicopter in my fleet, should I try a new flight controller? I’ve had great success with the CUAV V3, but the Holybro Durandal keeps showing up and looks more future-proof?

Glad I haven’t ordered anything yet. I just saw this today:

X7 will be CUAV’s first Autopilot using STM32H7 processor. It will not only update the processor, also bring new sensors and high-speed USB (480M), which will make your flight experience better. It is undergoing flight tests, if you have more good comments, please comment below. [image] [image] [%E5%BE%AE%E4%BF%A1%E5%9B%BE%E7%89%87_20191202103818] NOTE: X7 pro uses a similar V5, modular design. Nora is not X7 nora, it uses the same side design as the pixhack series Autopilot. They all hav…

great success with the CUAV V3, but the Holybro Durandal keeps showing up and looks more future-proof?

What’s “future proof”? The cpu load in our V3x controllers only runs 48%, not even close to maxed out.

I’m using the Pixhawk3 Pro in my twin-engine project, as I needed the extra Aux output for twin-engine throttles and controls.

It has a STM32F469, which also has plenty of reserve power under the hood. And it has a IOMCU. I’m not fond of the module type controllers for helicopters, nor the cheaper designs that are appearing that have no IOMCU. We’ll continue to use the V3x in our smaller 800-class helicopters.