Not new to ardupilot, but have been using the autopilots since APM 1 with the multi-layered boards. However, lately I’ve been toying with the idea of putting one on my large gas helicopter just for the fun of it. This will be my first ardupilot project on a single rotor heli. I feel confident I can do this, especially with the help of these forums and with all the hard work by developers getting the new 3.6 firmware to where it is today. I just get a little overwhelmed with all the pixhawk variants and potential future hardware that’s hitting the market. I know Chris Olson has started using the newest CUAV Pixhack V5 and seems to really like it, so is that the route I should take over the Pixhawk 2.1, or to wait for another updated variant? I’m a patient person lol.
The heli frame is a variant of the Airstar International Mongoose (stretched to swing 1200 sized blades). I have a ton of room on the frame for mounting locations and can even make an isolator mount if need-be (I’ve read it’s actually not recommended with the internally damped imu’s (cubes).
I plan to take on this project slowly and methodically since single-rotor helis are no joke. I have been flying the heli for the past couple years with a flybarless head but without a flybarless controller, so taking over full manual in case of bad tuning parameters does not scare me thankfully.

Thanks for reading!
-Chris! 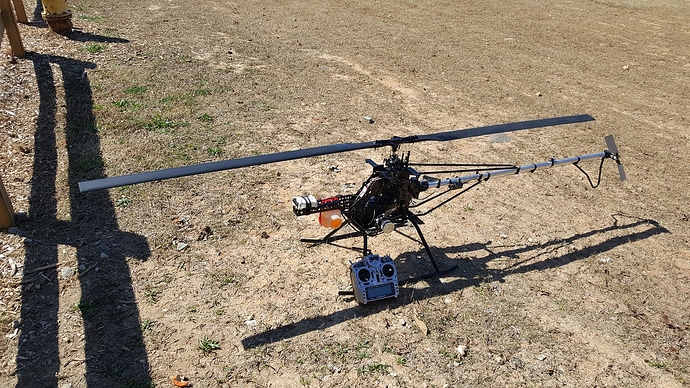 I’m sure @ChrisOlson will chime in soon, but I’ve been also retaking the helis and Chris is right on his choice, I’m also using the v5 on a 700 sized heli and the PixHack v3 on smaller helis, and even a small MindPx-v2 on a 450, because of it’s damped IMU construction. The newer F7 boards offer perhaps the biggest progression path for newer features on ArduPilot. Currently there is no difference in features between the F4 and the F7 and, as usual, ArduPilot tries to keep the features available for the largest number of boards, so expect long term support to the F4 too.

Well, @LuisVale is right - I would personally use the V3 or V5 variants of the CUAV controllers for a helicopter. They have proven here to be a better IMU design to handle the rigors of helicopter operation. There’s other boards that work but more careful attention will have to be paid to vibration damping and IMU consistency or you will have all sorts of hairy problems with EKF lane switching causing attempted tipovers and very stressful in-flight recoveries.

A lot of these controllers were designed with multicopters in mind. There are few of them that have helicopter FBL unit quality gyros.

Thanks for the info guys!

Another question I have:
Can I use the SBUS OUT port from the Pixhack V5 to an SBUS input port on a servo bus like the Frsky RB-10 or RB-20? Or do you think this is totally unnecessary? I use these on my gasser fixed wing planes. Figured it would be nice to be able to replace all the servo wires going to the autopilot with just 1 line going to a servo power bus.

Yes, the SBus out is available to that. I don’t have experience with that, but I believe that some programming of the servos would be required to only respond to the appropriate channel.

What about pixhawk v2.1 from proficnc?

What about pixhawk v2.1 from proficnc?

But I don’t find any information regarding V3 internal IMU design. It’s not even mentioned that it has a damped IMU…

CUAV stuff comes all from chinese providers. There is no dealer in europe unfortunately. So its much more difficult to get one.

So my question is:
@ChrisOlson
What about Pixhawk V2.1 - is it comparable to V5 or much worse? – they share the same mechanical design… somehow.

No, Chris was talking about the CUAV V3, not the Drotek one and the CUAV V3 does have a damped IMU. (and flies my Soxos 600 very well, thank you).
I got my CUAV V3 from Foxtechfpv and had it in less than a week (via EMS).

I also recommend CUAV V5 like @ChrisOlson because the actual built-in shock performance of V5 and the consistency of multiple IMU data are indeed better than other flight control. 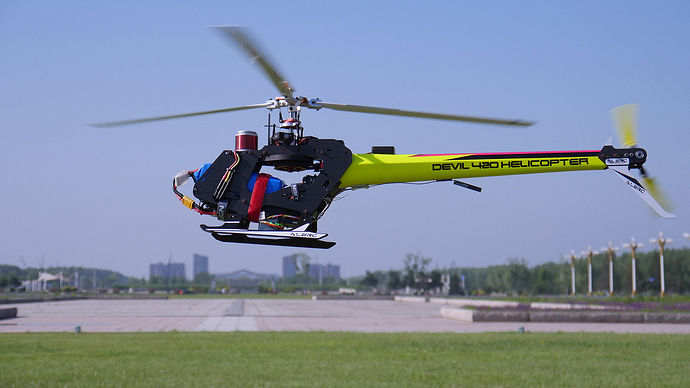 Hi zhangpeng, thanks for this input + picture.
I think I will have a look at V5 Pixhack.

I would check around and see if a CUAV v3 is available. The problem with these controllers is that they are so darn big. This is a V5 installed in a 806 with dual redundant power supplies: 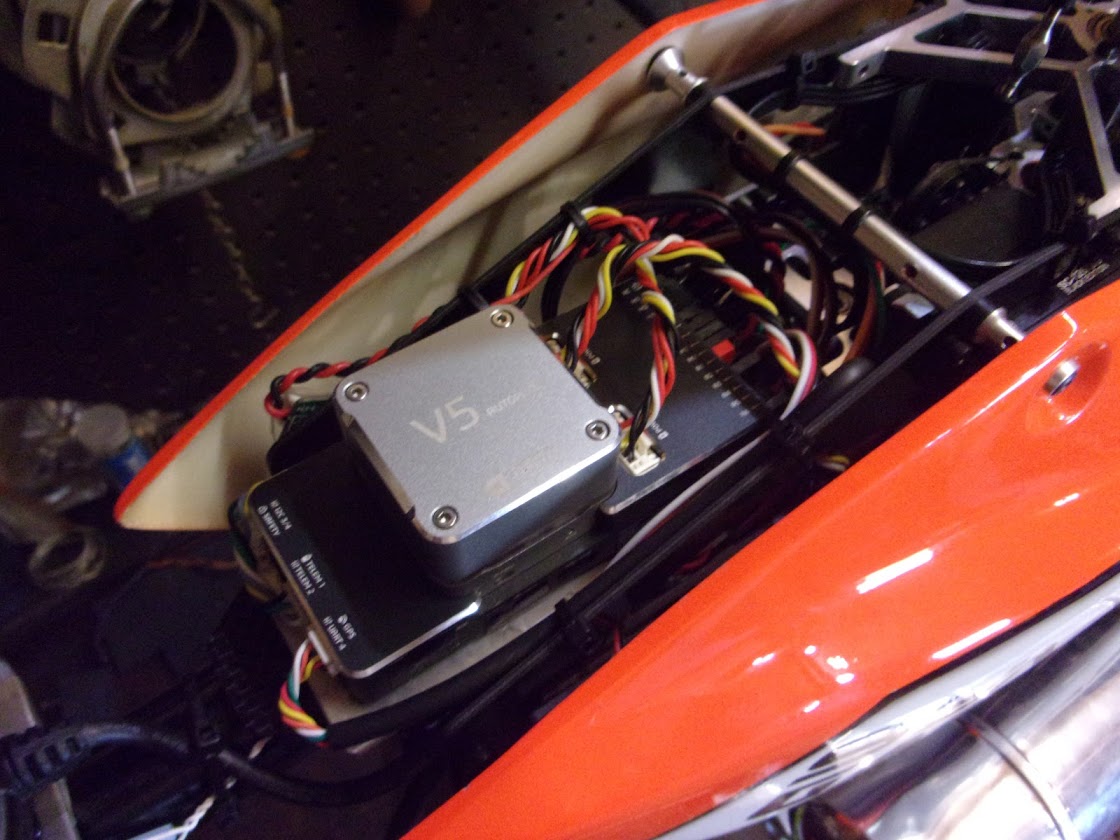 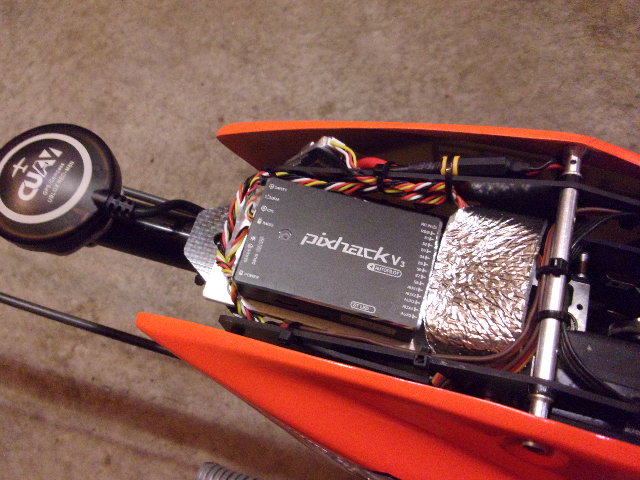 All else being equal I like the formfactor and size of the v3 because it’s not much bigger than a typical FBL unit, it is tougher than nails with a CNC machined aluminum case, JST-GH connectors with no connections to the face of the board, fully damped IMU’s (I have no vibration isolation on it whatsoever except for an aluminum plate underneath it because the FBL unit tray has holes in it), and it comes with high-quality silicon insulation wiring that does not transfer vibration to the board. Even the GPS cable is round so it’s easier routed and does not transfer vibration to the board.

The FBL unit manufacturers had this figured out long ago - you don’t make connections to the face of the board in a helicopter - only on the ends of the controller.

The IMU consistency in the v3 is also par excellence - they get rid of all the EKF “lane switching” and IMU clipping common in helicopters when running on the ground, and that can cause a tipover if the EKF suddenly decides to switch attitude solutions. If the IMU’s aren’t consistent and the EKF switches the attitude solution, the attitude solution will be different and it causes helicopters to do some really fun stuff that keeps you on your toes. Since we don’t like helicopters doing unwanted dance moves that typically don’t affect multicopters, selection of your controller, how and where you mount it, will make the difference between a helicopter that is precise and stable vs one that is glitchy, bobs the tail, and handles like a loose bag of bolts.

I am still considering the Pixhawk 2.1 too. I like Proficnc products and would love to support them if their stuff ends up being my best option for my large heli.

I did see the other day on the Proficnc facebook group that they are releasing some exciting products soon. I have no idea what yet but I may wait and see

I flew the current generation of PH2.1 for quite awhile and they are good if you make some extra settings to disable the extra IMU’s (one IMU is undamped in it) and take care to leave plenty of wiring relief to prevent vibration to the face of the board. I had to put lead weights on them to get them to fly decent in a helicopter. The flat ribbon cable with the Here GPS must also be paid attention to in allowing relief so it doesn’t transfer vibration to the Cube. It is VERY stiff and if you tie it to the frame it will provide a direct pipeline of a way to measure frame vibration with your controller with the #2 IMU.

I don’t have any of them installed in helicopters anymore. But I am installing one in my TriPlane as I think it will work quite well in the TriPlane.

Very glad I asked. Chris, those are all very good reasons to look more toward the CUAV variants vs the Proficnc one.

Thank you so much for your experience with this. Saved me from having to find that out the hard way

Very glad I asked. Chris, those are all very good reasons to look more toward the CUAV variants vs the Proficnc one.

I wish ProfiCNC/Hex would make a small formfactor controller, yet full-featured with a servo rail, like the CUAV v3. I thought at one point that the Pixhawk Mini might be the answer so I bought and tested one. The IMU damping and consistency in it was horrible. And it doesn’t have a built-in servo rail.

The PH2.1 is much better than the original Pixhawk and if I’m not mistaken somebody told me once that the reason the second IMU is undamped is so it could measure vibration and attempt to compensate for it with filters (or something like that). But the whole concept of putting the IMU’s in a module mounted to a carrier (including the CUAV v5) is flawed (IMO) from the standpoint that the center of mass where the IMU’s is is way further from the mounting point than a “flat box controller” like the V3.

The V5 is a good controller, but the V3 remains my favorite for helicopters due to its rugged construction and design. And its small size with full features only giving up one aux output compared to a bigger footprint controller. I love the way the helicopter flies with the V3 in it, especially gassers which are hard to isolate vibration sometimes at certain engine speeds. If you can get one for your big gasser I know you’d be pleased with it. As far as a helicopter autopilot I have not found anything that works better (including the new V5). Just stick it on the FBL unit tray with four pads of velcro on the corners of the controller, set it up and go fly. I’ve installed nine of them in helicopters - all piston machines.

The V5 is also very good but it’s one downfall at this point is that it can only run ChibiOS beta builds (soon to be stable builds) of the firmware. The V3 can run either NuttX or ChibiOS. It is a FMUv3 design (like the PH2.1) with triple IMU’s, twin compasses and baro’s, F4 processor, etc… It is a proven and rugged design, low power consumption, the V5 is the “new kid on the block”. Do not confuse it with the Pixhawk V3 Pro, which is a FMUv4. They are two different controllers:

CUAV Pixhack V3 and M8N GPS has been ordered. Thank you Chris, and everyone else!

Someday you’ll have to tell us about those big grey and white helicopters you have in your login picture there. Those look interesting.

Hi Chris, those are the helis I’m referring to in this thread

They are made by Airstar International and unfortunately not made anymore. The picture I posted above is without the canopy. They are called the “Stingray” model which is basically just a stretched Evolution which is based off of the popular Mongoose. They use 29-30cc zenoah engines spinning 1200mm blades. It’s a pretty light airframe and definitely not up to the abuse of 3d aerobatics but they are great platforms for slow endurance flights.