Best contribution for May - Jaime Machuca and Nick Nunno 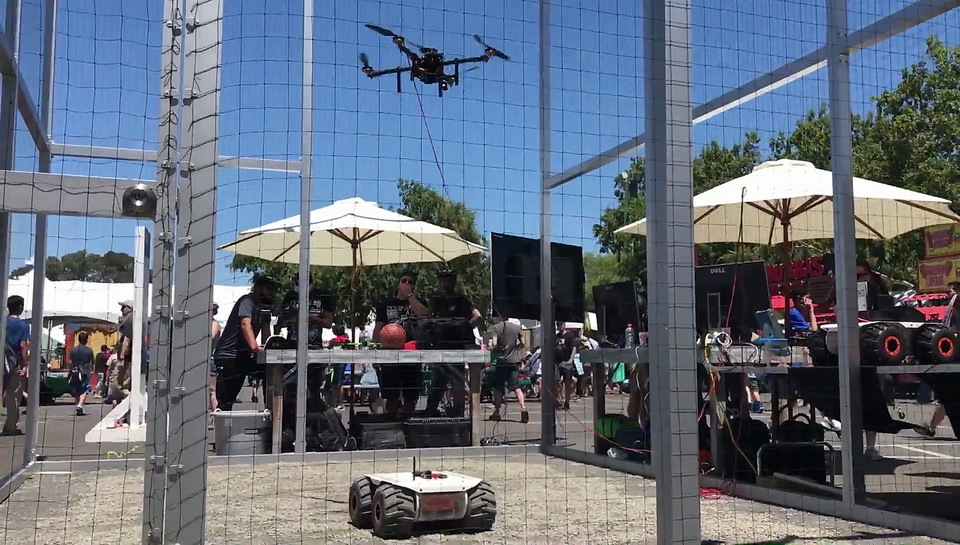 Congratulations to Ardupilot Developer Jaime Machuca and Nick Nunno of Aion Robotics for winning the “Best Contribution of the Month” award for May 2017, for their work towards and including Ardupilot’s successful demonstration at the MakerFaire Bay Area in May.

Invited by Intel and sponsored by both Intel and The Cube, the project for MakerFaire was started by Ardupilot hardware lead and Cube designer Philip Rowse. Philip unfortunately faced unexpected hard traveling constraints less than a month before the event, yet Jaime volunteered to step in and manage the project both remotely and on-site, prior to and during the event.

The project idea consisted of having a copter follow a rover with both vehicles running Ardupilot on a Cube aka Pixhawk 2, while showcasing Intel Joule or Edison. The copter would fly with an Intel Edison onboard, a camera, GPS precision RTK with Here+, IR-lock for precision target following, Poxyx UWB for geofencing, and a power tether for continuous flying. If time allowed obstacle avoidance and SLAM would be performed on the rover with a Joule and Intel RealSense ZR300 camera.

As is typical with complex projects of this nature, time (surprise!) became scarce quickly and deadlines approached faster than anticipated. With just a month to go, a team was formed together by Jaime and Philip, that included Nick who provided his freshly designed high end rover, Jonathan Challinger who started working on integrating a copter provided by EnRoute, Dan Pollock hard at work on Ardupilot SLAM solutions and ROS based Edison and Joule integration, and Mission Planner’s Michael Oborne for on site help an support.

It’s worth noting that Nick’s rover is no average one, but instead a high power and industrial grade ground vehicle. Weighing in at over 30 pounds, two feet long and one and a half foot wide, the Aion Robotics rover also uses industrial grade servo motors for propulsion, with variable duty cycle. Given this, Ardupilot developer and Rover specialist Pierre Kancir volunteered and provided crucial on-going coding support, as Tridge also stepped in to add custom and compatible support for the previously unsupported motors and its control signaling requirements.

Randy McKay as Arducopter lead also stepped in and provided support on the copter side, along with Ardupilot developers Peter Barker and Grant Morphett. Needless to say the project saw many ups and downs, yet thanks to Jaime, Nick and the coordinated teamwork of all participants ultimately an “Up!”, with great execution at the MakerFaire venue.

Challenges the team overcame included shipping delays, (parts were shipped from all over the world including Japan and Australia), unavailability of the tethered leash, and the typical yet nerve wracking technical trials and tribulations always present when building, integrating and testing a new and complex robotics system under harsh time constraints. Not to mention (as Jaime made his way from Aion Robotics in Colorado to Maker faire in California, after having visited and worked with Dan in Texas for the vision part of the project), a rare and unexpected May snow storm in Colorado!

Highlights of overcoming the many challenges faced included Jonathan and Jeff Wurzbach designing and building a working powered tether (link to documentation here) in what appeared to be the blink of an eye, and Tridge remotely debugging and tuning the rover from half way across the world and a 16 hour time zone difference.

Regrettably Intel has just recently announced the end of life of the Joule and Edison. The good news however is that the cube was designed with modularity as a starting point, and as such works equally well with other companion computers like the Rasberry Pi, the powerful NVidia TX1 and TX2, and many other computers. So work done for this project is not lost at all, and instead will continue to benefit this community.

If you missed them, Jaime made several videos documenting the “Road” to MakeFaire, well worth watching! They are available on his youtube channel, and were also blogged about on this forum: Episode 1, Episode 2, Episode 3&4, and Episode 5.

Congratulations Jaime, Nick and the team!

The prize this month was $200 for the top contributor. Thanks to those who donated to ArduPilot, including our Corporate Partners. If you are a company and wish to donate a prize for an upcoming month, please email the partners email list (partners@ardupilot.org).

An additional little detail… the copter flown was fitted with the prototype Open Motor Drive ESCs, and flew beautifully for the weekend!

The details of how to build the tether are also published in the wiki if people want to build their own!

It was an absolute pleasure meeting and working with all of you. It truly takes a special organization to amass that much talent, support and coordination from around the world on such short notice. Great team accomplishment and an amazing outcome all things considered!

I look forward to working with you all again soon! - Nick

proficnc, can you post a link to that wiki?

My apologies and thanks for providing me clarity. My handle is derived from photography background, not being particularly adept at reading comprehension.

Nah … It wasn’t really obvious. I’ve edited the post to make it more so.

Really well done to everyone involved!

I really like the look of that Rover! Looks like a mini version of the Russian Sherpa ATV. I would love to see an amphibious version so it could do Arduboat as well!

The tether is also interesting. Was the AC to DC power supply required to power the whole setup from the mains?

It was a little crazy but fun. Congrats Jamie and Nick.

@jschall the tethered quad looks awesome. Read the link in the wiki but still wondering how you setup the tether to switchover to battery if you lost the power tether? You must have isolated it somehow so it didnt get charged by the tether and what did you use for that (high current I imagine).

I want to try and build one this week. Wish I’d seen this earlier. Really neat.

I guess it is continuous charge , the schematic could look like this: 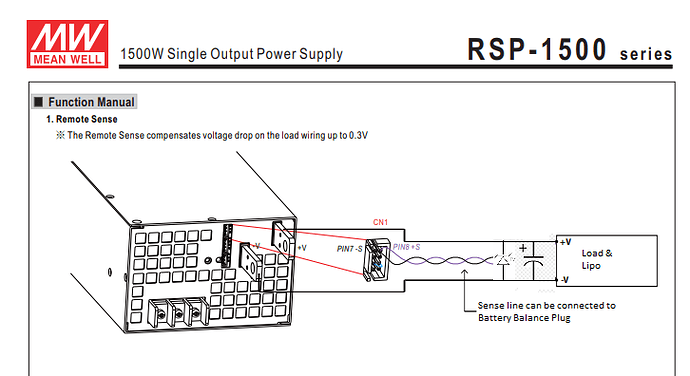 Thanks for that! From So from what I am seeing, the sense line is simply adjusting the voltage (+/- 0.3v) and it’s essentially charging the battery with the capacitor and zener diode on there. Suppose the cap needs to be big enough for there to not be a shut-down with the tether disconnects but that would just be some trial and error. Am i following you correctly?

I was thinking of going much higher voltage (DC) and then using a small high current capable stepdown (they are small form factor and can be run in parallel) and then would be able to use much much thinner wire. 300v dc would even be non-issue (https://www.cincon.com.tw/productdownload/SPEC-CFB600-300S-V11.pdf).

Then while high DC voltage is on the line, current is low. That’s why I was curious as to how the switch was being done since this approach you couldn’t charge the battery at 300v (obviously). Just seems better to run it at a few amps up 20x gauge wire then huge voltage drops if running at 40-60 amps…

Am i crazy with this approach? Seems electrically more logical, just need an adequate switch/relay/etc.

Both the Power Supply and Battery are connected to the Load in parallel , if the power supply get disconnected, it flies on Battery just like an untethered drone.

Yes, most of commercial approach use high voltage transport with stepdown on Drone.
I think that considering the time allowed, they went for the oubvious and easy to get é off the shelves components.

Ya. In a bind I probably would have done that too. Easier overall since definitely off the shelf could make it work. It’s cool what they did. This isn’t for commercial, I just figured if I’m going to do it, might as well do it what makes sense to me electrically. Suppose I’ll need to look at what can switch that type of current without issue but the step down looks like it will be best. This will be a fun one

thinking some type of ssr but current is going to be the enemy.