So I had a 4s believer with 2814 1050kv motors. It has a workhorse for more than a year. I wanted to switch on 6s and I built another one with 3520 550kv. This one (6s) doesn’t want to stay in the air. After the launch it flies some hundreds of meters and after that it rolls on the right side and crashes.
The propellers are mounted CW and CCW so I don’t think is it a torque roll or something.
Maybe somebody with more experience reading logs can help me with the issue because I totaled 2 fuselages already and I am really thinking on switching to 4s.

I uploaded 2 more logs from the same setup one that hardly flew and the other one crashed the same way as today.

I looked again and again on the log.
Could it be a EKF3 issue? I say this because NKF.VD is calculating a negative value after the launch for a second and it matched the time I saw that I lost the command on the plane and it started to roll.

Can anyone confirm this?

@itsnotme your actual and desired roll attitude (ATT.Roll and ATT.DesRoll) seem to diverge in opposite directions: 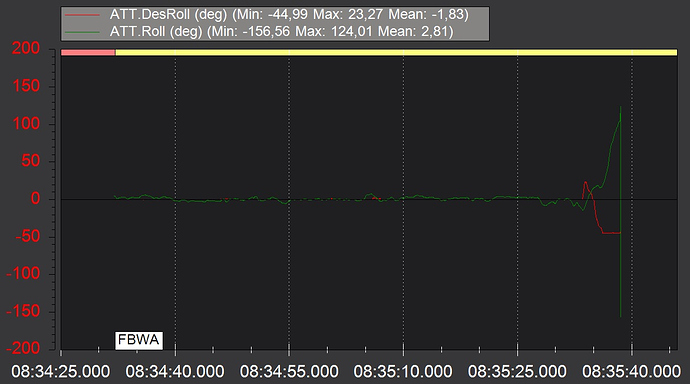 imho it might be worth checking your aileron servo directions https://ardupilot.org/plane/docs/guide-four-channel-plane.html#servo-function-reversal
someone more knowledgeable might chime in and correct me if i’m wrong please.

on a sidenote you’ve unticked all arming checks except for GPS lock. mind that this does not solve arming issues, it just mutes the corresponding notifications.

The ailerons were correcting in right direction. The plane started to roll on the right side.

I really don’t know. Maybe the propellers were to soft. I think at everything.

@itsnotme you upped two tlogs, one on 4S that did seem to fly ok, and another one on 6S (takeoff failure). as it seems you’ve been moving from a ~ 500 Watt 4S setup to a somewhat generous ~ 2.5kW on 6S, pulling 100A at WOT. when increasing batt cell count i’d expect you’d do that to actually DEcrease current draw. however, yours is requesting four times the power as compared to the previous setup now. what prop size are you using on your 6S vs 4S setup?

other than that i can’t spot anything that really strikes. i’m having a hard time reading something from those crash logs though as they hardly show more than a second of flight.

Along with the roll, the plane also levelled out and also went through a very dramatic pitch drop at one point before the roll occurred. The roll started shortly after that. The plane never did reach the demanded 20 degrees pitch. In spite of that it was moving quick and climbed well.

As was already stated, with only a few seconds of flight it’s hard to see any patterns. So here’s my suggestions:

The dramatic pitch drop is only in the logs not in the real flight. I think it is matching the acceleration.
Vtail is moving correctly, CG is spot on, no battery movement.

I know that arming set to 1 is the best case scenario, but this is not one.
I don’t have other logs, as I stupidly deleted them.

I started to think that I had a faulty motor.

A mechanical failure like a motor would certainly cause issues. The only thing is the log doesn’t show yaw that you might expect if one motor fails with the other at full power. Also the current draw doesn’t have any sudden changes that would expect to see if you lost the draw of one motor.

… that current draw looks really high. Peaking at nearly 100amps. Even with only 70% max throttle. Do you know if that’s calibrated? Because if so, you’re probably right about a motor issue. I would expect the same Vierfuffzig, and the current should go down from your 4S setup. If you have access to eCalc or someone here can run the numbers for you and see what you should expect for your setup.