I had been posting in the Striver Mini thread previously regarding this conversion because there was much-experienced personnel there but it somehow felt wrong, hence creating a new topic and linking to the older posts.

[IMG_20211129_201736] [IMG_20211129_201732] Started wiring up one of the wings. Currently, its a test setup for testing hover soon. Planning to use 6s7p LG HG2 Li ion battery first. I have kept the motor spacing for 18 inch propellers. That might bw an overkill but considering the voltage drop, i think it is best to start with a larger prop first. Any recommendations regarding the wing twist in the above post?

Today, I had another flight in Qstabilize mode followed by QHover Mode. One thing I have observed, the quadplane tends to move forward with no pitch input. Maybe it can be adjusted by Q_TRIM_PITCH as stated in the quadplane tips here: QuadPlane Tips — Plane documentation. If the aircraft tends to move forward, then Q_TRIM_PITCH will be positive, right? The quadplane also has calculated the hover throttle to be about 0.25. I am using 18 inch props at the moment which are surely an overkill and…

I seriously hope I am not spamming this thread. If I am, kindly let me know so I can move it to another topic. For the wing flex, I was following the tuning guide at Tuning Process Instructions — Plane documentation, where after step 6 and a bit of manual decrease of D term, the flex is almost all gone. maybe it was due to the control loops overcorrecting. Either way, a significant decrease in wing flex is observed. Step 7: Re-tried QHover which also performed much better. Step 8: Yaw Bias wh…

Great to see that you’ve started this thread - it is definitely a consideration for me to convert a believer that can be used as a sub 7kg class VTOL. I’ll be very interested to see how your conversion works out.

I notice you’ve got an Emlid antenna on there, so I assume you run an M+ onboard? do you run it RTK or PPK? Do you have photos and details of your configuration inside the aircraft? I would be interested to see what you are running in there and also what your MTOW is when fully configured for a mapping mission?

I use it mostly in PPK mode. I am currently using the most worn out body for the conversion.

MTOW on a mapping mission is roughly 5200g
I have covered all of it with clear laminating film. That adds to a lot of weight. I shall take photos in a couple of days.

Any suggestions regarding this?

I was able to capture the Batch sample for the harmonic notch filter setup.

This are the FFT results from the Mission Planner.

The documentation states:
“On the graph it should be possible to identify a significant peak in noise that corresponds to the motor rotational frequency. On a smaller Copter this is likely to be around 200Hz and on a larger Copter/Quadplane 100Hz or so. Here is an example from a 5” quad:” Managing Gyro Noise with the Static Notch and Dynamic Harmonic Notch Filters — Plane documentation

The example graph shown in the documentation has an amplitude peak of around 80 to 100.
However, my pre-notch FFT returns peak amplitudes of 8 to 10. clear peaks are there but at different places in Acc and Gyr

So, after extensive reading, I found the answer here:

I am not able to find hover_freq value in the mission planner Copter 4.0

The gyro graph, although often the peaks are at the same frequency [pre-tune-fft-annotate]

The GYR0 is to be used for the frequency. perhaps amplitude does not matter.

Going to set up the harmonic notch with hover_freq = 192, and hover thrust at 0.27. will post the results.

So, the following are the FFTUI results after post filter setup. There seems to be another peak at 60hz. However, the 192Hz peak is gone.

One issue that is being faced is I can not seem to get rid of oscillations in the yaw axis. According to the tuning process, Yout is to be observed for any misalignment in yaw axis abov 10%.
(Tuning Process Instructions — Plane documentation. )
My logs have a value of a mean of -0.04 i-e 4%. I have tried setting the yaw rates as described here Tuning Process Instructions — Plane documentation (Q_A_RAT_YAW_P : 0.5 x Q_A_ACCEL_Y_MAX / 4500). However, the value comes out to be 2.11 which causes many oscillations. A value of RAT_YAW_P = 0.1 can get the vtol to hover with minimum oscillations.

If anyone could shed some light on the above or point me in the right direction, it would be great. Furthermore, I am observing a PM.Load of 76% on the black cube. How safe is it to continue with this much processor usage?

Since the previous post, I managed to control yaw oscillations by re-tuning the yaw axis manually as per the following post:

Hello Robin, I previously tuned a quadplane with 29’’ props, here’s some tips that was picked up: If you want to be gentle on the motors during spool-up (given the high inertia from the large props), you can increase Q_M_SPOOL_TIME. Mine were doubled from the default values and it had no problems. The spinning props responded quickly enough to handle gradual changes in roll and pitch, so long as the PIDs are tuned correctly. Not able to answer this; but they were left as default on my quadp…

To control slight overshoots on pitch and roll axis, SRATE was reduced from 50 to 35.

Other parameters also changed were as follows: 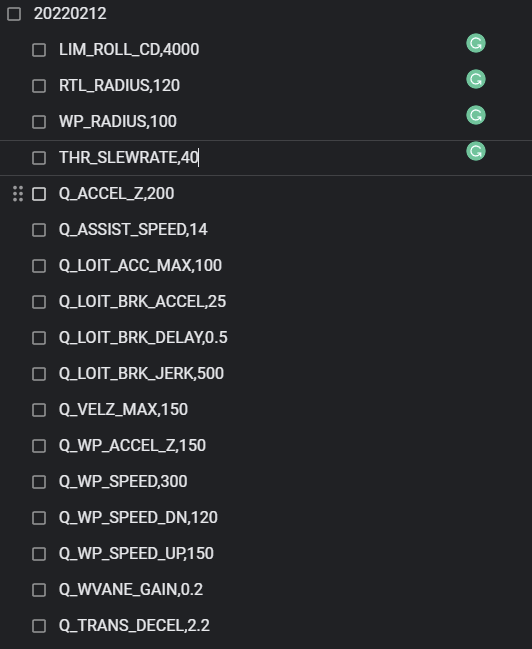 According to step 11 of the tuning process Tuning Process Instructions — Plane documentation, I tested the tune by setting the Q_A_RATE_FF_ENAB to 0. However, no noticeable overshoots or oscillations were observed. So I set the parameter back to 1.

I remain skeptical of going into autotune due to the fact that I think the motors are a bit overloaded. The vertical flight time is in excess of 10 mins, however, the motors get quite hot after a regular flight of 3 minutes.

@Sunny52266 sorry for being so slow to respond.
One thing you could try is the new VTOL “quicktune” script, although you may not have enough memory for it on CubeBlack

I will try it out and report. From logs I see only 51kb free memory. the documentation states at least 70kb is needed with 2mb flash.

If that won’t suffice, I have an orange cube lying around. I might have to replace it but it will take a while due to other commitments.

Is it a replacement for initial manual tune? autotune is recommended after it?

@tridge Apologies for taking such a long time to report.

I replaced the autopilot with a cube orange and did a quicktune using the script.

Yaw oscillations seem to be gone. however, there is some flex noticeable in the wings while the vehicle is yawing; about 5 degrees. Would you recommend continuing with the transition test in this case?