So if I wanted to sense current and what not like one would do with a pixhawk and a power module, is there something that does the same thing for a beaglebone blue, What is the best power layout for using this? 2s-4s is my goal, but if I did 2s it may see high amp draw so didn’t think it would be safe to run it throught the board it self. this would be for a plane setup.

So, just curious, am I asking a question that is covered somewhere else and I am being dense for asking? or is just no one really using this board yet, so no one has an answer really?

Have you read through the Wiki here http://ardupilot.org/plane/docs/common-pixhawk-wiring-and-quick-start.html?

The power module supplies an analogue voltage proportional to the battery voltage and current flow.
It is then a matter of calibrating the seen voltage to match what the battery actually is doing.
This can be connected to analogue input pins.

Most of the questions/answers are on the blog: BeagleBone Blue released, Linux-enabled autopilot for 80$

Concerning the power module, the Analog ports are not yet implemented on the BBBlue, @mirkix, will probably add this features on a next release. The BBBlue is a general purpose robotic board that has capabilities to drive DC Motors with 2S batteries using onboardH-Bridge that is limited to 1.2 Amps. It does output 6Volts on the PWM bus for servos and esc. Brushless motors will be powered using external Power Distribution Boards like most of the Vehicles we fly or drive.

Thanks, So when you state that it need to be added, are you talking a hardware revision or a firmware update? or something in between?

Software for the ArdiPilot only.
All the hardware is there : ADC and connectors are working with the robotic cape utilities, I just tested it 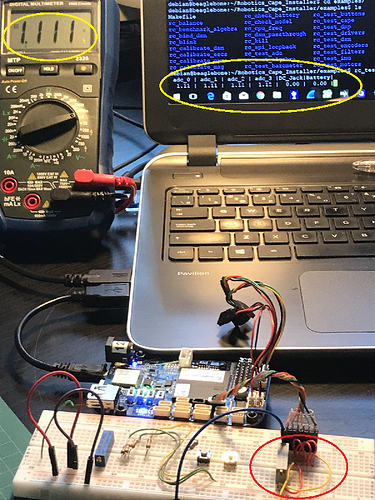 Wow, didn’t need to go that far, but Thanks!

Would of had my BB Blue this weekend but my package got misplaced on delivery. maybe this week or next I can actually get hands on with it.

Hi! I am currently running Ardupilot (Arducopter 3.5.2) on a Beaglebone Blue and I would, in a separate python script, access the data coming from the ADC and the I2C ports (some gas sensors will be deployed there). Unfortunately, when I try to do that (actually just the ADC for now) with the Adafruit BBIO library, after calling ADC.setup() the script stops with a RuntimeError, telling me that either a cape with a conflicting pin mapping is loaded or a device tree object is loaded that uses the same name for a fragment:helper. I run Debian GNU/Linux 8 (jessie) with kernel 4.4.91-ti-rt-r137 and my DTC Version is 1.4.4. This happens even when Ardupilot is not running. I have checked online for suggested solutions, but I came to a dead end as all solutions suggest to add a line to the slots in the /sys/devices/bone_capemgr.*/slots, but I do not even have that directory. Sorry for the inexperience, I am quite new both to the Ardupilot and the Beaglebone world.
Thanks for your time, kind regards
Luca

The BeagleBone Blue has not implemented the Memory Map ADC within the Directory Tree, so unfortunately you annot acces it using the standard capemanager. We have requested the BBBlue developper to add this feature a few month ago, but no progress so far.

So you can use the program showned above rc_test_adc that can work concurently with ArduPilot.

Thank you so much! could you please post a link of a guide on how to do it? I mean, how to have that code in the beaglebone and the required packages and libraries. I downloaded some examples but they were almost all in js and no one of them test the adc.

Basically , the BBBLue is the Strawson Robotic Cape , so all the utility code is here: https://github.com/StrawsonDesign/Robotics_Cape_Installer

Thank you, just tested and it works. Do you know if there is something similar in order to exploit I2C port? I want to deploy an array of sensor through an I2C bus, it would be of huge help. Thank you in advance

I2C require writing drivers for both Master and Slave. Thats more complicated than just reading an analog signal. Depending of your need you could collect signals using an Arduino and transmit to BBBlue using Uart

Do the H-bridge drivers on the BBB have any current sensing capability? Thinking about using something like this to determine servo travel by driving against the end stops.

You’ve sure added a lot to this ongoing project. I’m at a stage where I have ArduRover running, GPS, 433Mhz telemetry, udp telemetry all ok. Game pad also working sort of. Still can’t get past the need for RC calibration.
To sort that I dug out a Spektrum dx6i transmitter I had. Got a Spektrum satellite receiver. Bound them via a Spektrum AR610 receiver. Tested with rc_calibrate_dsm, rc_test_dsm. It’s working. However in mission planner I can’t get any indication going

. Any thoughts at all?
2nd question just to push my luck. I’m trying to drive 2 12v linear actuators via the motor outputs. I’d also like to use the feedback they provide. I’ve tested the motor outputs and they operate the actuators, again however I can’t make anything happen via mission planner. Again, any thoughts? Trying to use the actuators to control a skid steer (zero turn mower). Should I be trying to use servo outputs instead perhaps?
Thanks in advance to any and all who’ve got any thoughts

@BenBBB I suggest you join us on the BBB CHANNEL: https://gitter.im/mirkix/BBBMINI