test of autotune at the field:
autotune of the hexacopter:
very nice response of the autotune, very quiet hover - everything perfect
pixhawk causes battery failsafe, but there is plenty battery left.
battery fs means RTL what the copter does. climb 10m up, RTL, hover in Loiter… Then:

i try to switch to althold, ekf failure, gps glitch, and unknown errors (see log) and the thing falls out of the sky… 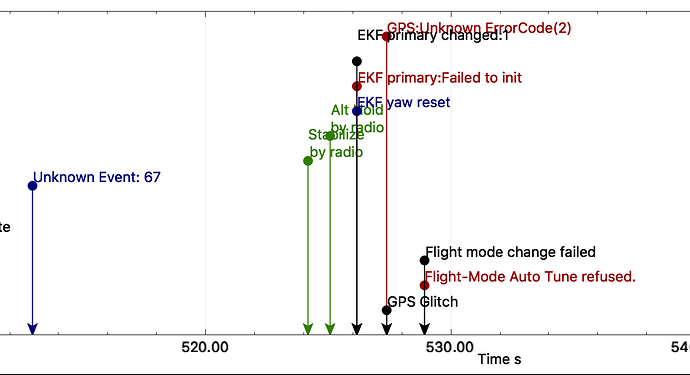 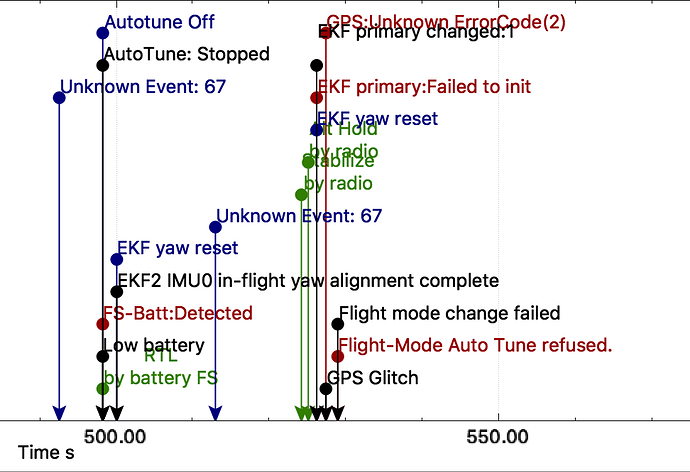 The only thing that really looks odd to me is these position jumps:

They only happen twice, and the first one doesn’t affect anything because in you’re in AutoTune mode. But the second one happens in RTL mode and causes the drone to displace in order to meet the old position target. I couldn’t find any reason they occur: no GPS glitches or EKF inconsistencies. Anyways, they’re not the cause of the crash.

Thank you Anubis,
Thank you for your analysis:
to 3. Strange thing was: I pushed the throttle way up, with any other drone this should have helped, but I am 100% sure the motors stopped totally spinning .

to 1. : this seems to be my fault, as I read the params carefully I understood it as min maH to trigger Batt FS, not maH used since start …

Your radio failsafe is set to trigger when the PWM input is less than 975, set by FS_THR_VALUE = 975. In the log, it went as low as 997. Meanwhile, the other channels were still receiving commands, so your radio was still connected and didn’t trigger the failsafe, but I can’t say why the throttle channel didn’t respond like you remember.

Are you sure it never started its landing descent? 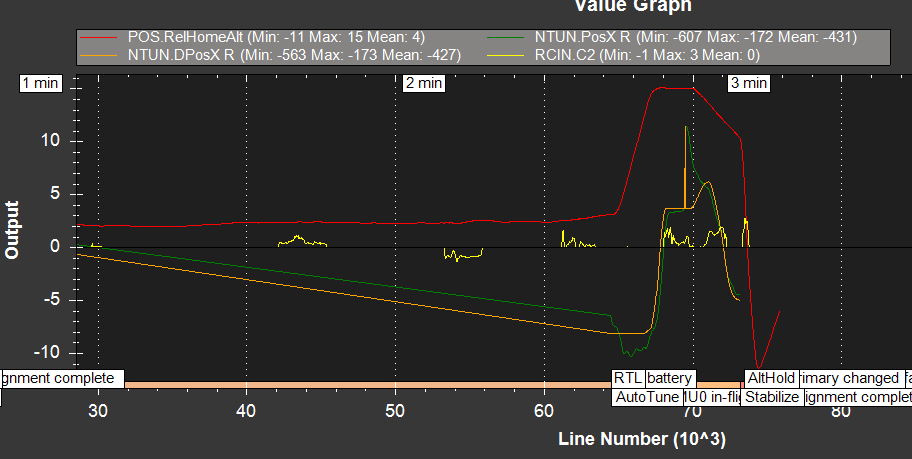 image.png912×459 10.8 KB
It looks like it started descending just before the fall, after the 5 second RTL loiter-above-home. You should have had XY control while it descended, although that weird position glitch definitely would have made it feel like it wasn’t doing what you told it, since the drone started moving when your sticks were centered, but afterwards it does seem to respond to your inputs.

In any case, the problem is of course the RC throttle input being 0 when you switch to Stabilize. I can’t find anything in the log that might indicate how that could have happened besides the obvious, which could point to a hardware issue. If you’re sure you had it throttled up, maybe try slamming your TX throttle stick around to see if you can get it to glitch out, or maybe that there isn’t some inversion setting somewhere (Autotune/CH8 switch? It was flipped soon after stabilize).

I found what those Unknown Event:67 are. They are caused by the flight controller switching between your two GPS modules. This is what caused those position glitches. Unfortunately I don’t have any experience using multiple GPSes, so I don’t have any suggestions for improving blending or preventing this.

Thank you for your analysis,
as a summary:

what I learned further:
I have to change the gps setup to make one primary and the other just as backup (or remove altogheter) - I have to take another deep look at the compass variables (blending etc)

I did order another Tarot Frame and will rebuild next week, the pixhawk seems to look okay for reuse, so I will keep you updated on my build/testing progress

one more time: thank you so much for your look into the log file !

(which hardware would you recommend ? a linux based system with px4 and nuttx ?)

I only have experience with various Pixhawk 2.4.x and the Pixhawk 2.1/Cube. The Pixhawk 2.1 isn’t small or lightweight or cheap, but I can say that it is very capable and offers a great degree of flexibility and provisions for safety, and is certainly of higher quality than other boards I’ve used. It’s also quite well supported, and has a lot of third- and first-party hardware available and in development.