I’m starting with ROLL autotune only as is suggested, but I’m not sure the starting PID are good to make it works properly.
What’s yours suggestion for the starting PID for the AUTOTUNE process in my case?
I also see others parameters changed by autotune like ATC_ACCEL_R_MAX but I don’t have any clues how to set it, please help

In this picture on the extended tuning tab you can see the starting PID, and on the right there is the new roll PID parameters found with the autotune

this is the log, in the middle there is the autotune for roll axis that gives the values on the right of the above picture

I’ve started to set Filters to 40 also to the GYRO to see if this could improve (in this log are set to 40) do you think its right? also based on the vibes measured?

Please ask me any further details, or to make a new autotune based on new ideas, because I’m quite lost in autotune ATM

I’ve been through this pain! Perhaps there should be a specific guide for small quads…maybe I’ll get around to it. Basically: you’re heading in the right direction, and I think you’ll get there.
Thankfully, the Jedi Master of tuning, Leonard Hall (he wrote the autotune code and some of the other control stuff), is into racing quads.
He wrote a really good guide here: http://diydrones.com/profiles/blogs/fpv-racing-using-arducopter
There’s a little video of him flying to prove it works here: http://diydrones.com/profiles/blog/show?id=705844%3ABlogPost%3A2256795&commentId=705844%3AComment%3A2257063&xg_source=activity

I’m still thinking I have some other parameters to fine tune to have proper autotune on this small quad, it seem too much trying to correct itself with poor autolevel authority.

In particular looking during the autotune process the twiching angle seems very small, so tiny inclination if I compare to medium size quad I’ve made the autotune. What parameters I could change to raise the incination angle for the autotune ?

Ah, that’s interesting. I’ve seen this too, with tiny twitching. My last attempt with fresh parameters though I get quite large violent twitches!

Hello,
had the same Problem. 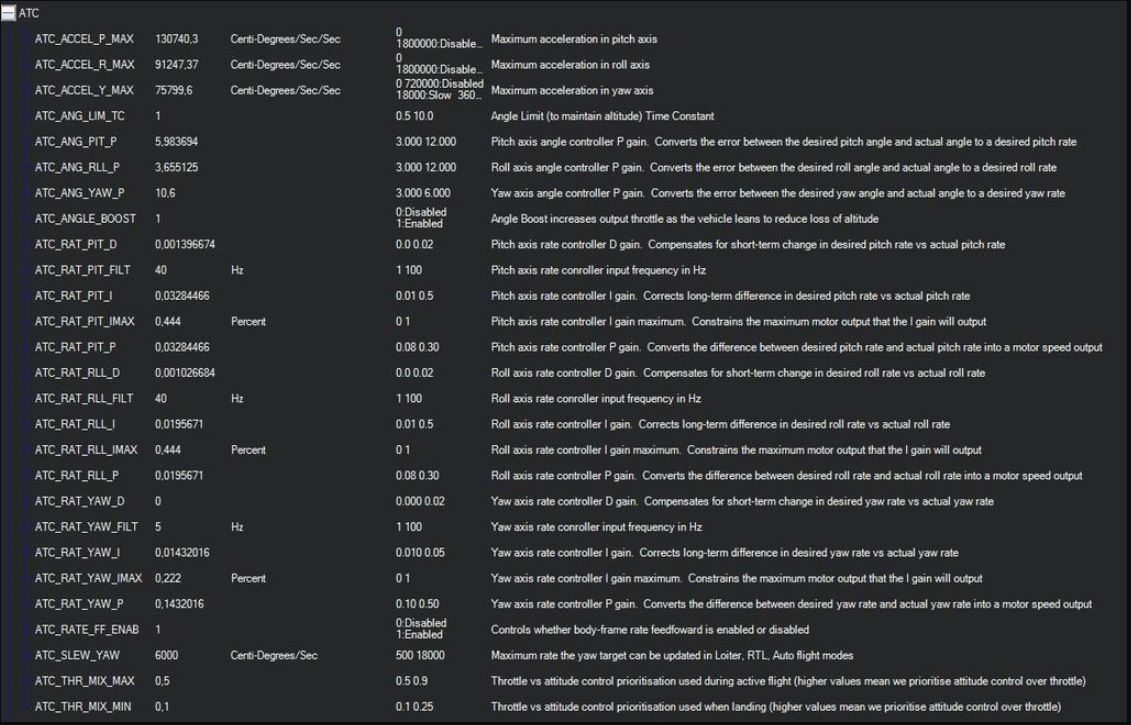 Here are my Autotune values.
Quad flys well and snappy:

sorry for off topic but someone explain why do you try to use arducopter on small copters instead of betaflight?

Testing, training, autonomous functions, because you can

Betaflight is great at what it’s designed for though.

Yup, iNav is an option but it is far less sophisticated and capable than ArduPilot.

Betaflight is far better suited to racing than ArduPilot.

I think a better description for what people with <=250 size quads that are running Arducopter would be “Racer size”.I haven’t heard of anyone actually racing them. I have no interest in racing my 210 PixRacer based mini quad but I do enjoy flying it in assisted modes, experimenting with Auto Missions and generally having Arducopter capability on a very robust vehicle.

Has anyone tried manually tuning?
I ended up w/ values 2 or 3 times higher than auto-tuning was giving me. I ended up w/ roll and pitch being about .1 and .12, while autotune was giving me values between .03 and .08.
It’s much more responsive than after auto-tuning, but still not as tight and responsive as I’d like.
My filters are at 40hz, my atc_accel are over 200,000.
But it still isn’t nearly as responsive as a betaflight controller on the same frame/motors.

It’s the only way IMO for what’s being discussed in this thread (small, light, large thrust/weight).

I spent more time manually tuning today.
Rate P and I are still at .1 and .12 for roll and pitch. D is .001.
I might actually still need to make these higher. it’s not oscillating, and it’s still not as ‘tight’ as I’d like it… (It’s hard to explain, but in BF, it’s like the copter is an extension of my thumbs. In APM, it’s like I’m controlling something that is floating around in the air… (Which I am… but I don’t really know how to explain…))
So today, I increased stab P to 14 for roll and 15 for pitch.
And Acro_RP_P to 20, with a little bit of expo. (Default is 4.5 and it says the max is 10, but that was still slow, and it’s working w/ 20) (I like acro to be a little scary)
ATC_Accel are up at 250,000 (Why does auto-tune lower these? Isn’t this sort of arbitrary and just about how fast the pilot wants it to respond?)
Increased the angle limit to 80 degrees.
Now it’s about as fast as I’d like.