Hey! Somebody told me i should be sharing my progress here.

This project aims to autonomously return a glider from a high altitude balloon (100,000 feet). I just wrapped up “proof of concept” autonomous glides dropped from a hexacopter. We’re ready for 18,000 foot class E flight testing, pending how our talks with the faa begins and ends.

Heres the video! Let me know what you guys think.

What’s the intended use? Thanks for the video!

Although i may be the bringer of sad news, I am a graduate student in Arizona and have been trying to get something similar to work in the context of high altitude flight research. Talked with the FAA a lot and as a summary: when flying in class E (or class A above that) you are going to be under the same set of rules as general aviation (and airliners in class A), meaning part 91. Essentially they are going to require some sort of “see and avoid” capability on the plane (and FPV doesn’t count for that). “sense and avoid” with something like an ADSB receiver could be possible in class A but it is not a required piece of equipment in class E, so for us the FAA was requiring a manned chase plane from 400 to 18,000 ft. In the end they said our best bet was to gain access to restricted airspace.

Although it’s nice to see someone else having a go at this sort of project ! i wish you all the best and don’t hesitate to get in touch if you want more information or would like to try to combine our efforts in regards to the FAA.

Just as a demonstrator for now, to prove that we can. Anything else ill get to down the road

Hello! Thanks for the response.

I may be the bringer of good news

@proficnc and Hex has made an ADS-B integrated carrier board for the cube. That’ll hopefully appease the FAA for the Class A flights, but either way, our first tests will be in Class E airspace.

And also, ArduPilot has an avoid feature that utilizes the ADS-B, and either pitches up, down, or avoids manned aircraft by banking and turning out of the way. This makes me really excited for my talks with the FAA. Do you have any contact information, or any way we can combine our efforts to talk to the FAA? I’m narrowing down my flight locations (looking at annual weather reports, 20+ mile radius of barren land, nearby airports etc) so I havent contacted any local FAA districts yet.

That’s great news, it definitely brings down the cost of ADS-B, I was looking at the Ping from uAvionix which would have added about $200 to the electronics budget. Although from talking with the FAA the issue is that because it’s not required in class E, not all general aviation aircraft has it, they still rely on the good old eyeball. So for us “sense and avoid” with just ADS-B and without some visual solution doesn’t satisfy requirements there (or in the other class E above 65,000 ft).

For location scouting, i would recommend using the Cambridge Weather Balloon predictor: https://predict.habhub.org/, it uses daily wind predictions to draw weather balloon trajectories and apparently is pretty popular for weather balloon launches, it helped us get an idea of the high altitude prevailing winds (and jet streams) and what sort of distances and flight directions were had to work with. Also helped select a requirement for the climb rate to avoid releasing 100s of milles downrange.

In regards to the FAA, we talked to the people at the FAA Unmanned Aircraft Systems
Safety and Operations Branch, this website has some contact info and resources: https://www.iafc.org/topics-and-tools/resources/resource/uas-regulatory-ops
Although that solution involves going through a lot of administrative hoops: you would need to establish yourself as a public UAS operator, then apply for a COA which is the sort of waiver that really starts the technology and safety solution discussions for “sense and avoid”. To try and go at it from another angle we talked about part 101 but that doesn’t fit UASs, and even if we were to climb and descend like a part 101 payload and fly up there under something else there is no legal framework for something that changes rule book during the flight. Essentially the system is not a balloon with a glider attached to it, it’s a glider with a balloon attached to it.
I do not know about staying below 18,000 ft but in any case for these sorts of missions that are really proof of concepts if you can do it in a restricted airspace it’s a lot easier, i would recommend starting your search with that and then falling back to the national airspace and FAA if you can’t find anything.

Thanks again for all the links and the info. The clearance for the 100,000 feet flights could be put on the backburner, i’m more confused about the class E airspace requirements that you guys were told. Did they still want a chase manned aircraft for Class E? or did you guys get an easy clearance for that?

Thanks again for these links. I’m going to be reading these and hopefully sending some forms in and beginning talks soon. When it comes to private airspace, i’m as lost as anyone else. I don’t know of any at all and dont know how to find them, my best plan of attack is to start emailing aerospace companies in the area.

What was the project you guys were working on by the way?

Did you remove the grease from the servos? It will freeze or thicken up and make the servos inoperable.
Did you make sure your powersource/battery is also able to provide enouth power in that temperature?
You craft does not look mechanical stable for the winds that are up there. I see a lot of flex.
Are your electronics that heat up (voltage regulators, processors, vtx, rx…) ok with a lot less heat disipacion with less air? maybe you can use that heat to heat your battery

How did you think of tackeling the max gps altitude? should be around 18km or 60k feet.
Your control surfaces seem very small, did you take into account the thinner air ?

This aircraft won’t be flying to 100,000 feet. As I denote in the video, it’tl only fly to 18,000 feet and finalize our software/autopilot setup. We still have a lot of real world temperature (throwing insulated fuselage into a chest freezer) and HILSIM testing to do before thinking of a 100,000 foot launch.

to answer your questions though:
Temperature issues going to be tackled in one go. I haven’t yet researched and tested the negatives of removing the grease, so I don’t have an answer for that, but I’m planning on having a thermostat keeping the insulated fuselage at a toasty temperature. This could include having the servos inside the fuselage as well.

The flex of the aircraft is completely normal. It’s seen a lot of crashes and nose dives from 80 feet, the fact that its even flying and still conducting tests for me is great. The finalized aircraft will most likely not even pilot itself from 100,000 feet to around 40,000 feet due to the thin air. It really ramps up after 30,000 feet, but again, this will all be decided after HILSim testing, and launch simulations.

The whole aircraft will most likely either be optimized or completely redesigned for gliding as well - it was initially designed as a powered aircraft to fly in slower speeds and to have very forgiving stall characteristics. I’m using it in controls validation because of how forgiving it is when it comes to CG and how comfortable I am with it.

Also! CubePilot’s Here2 GPS uses the m8n engine, datasheet tells me it works up at 50KM altitudes. Which I’m very happy with considering our final goal is 30km.

Just remove the grease, no problems.
Very nice, best wishes from hiiiggghh up! 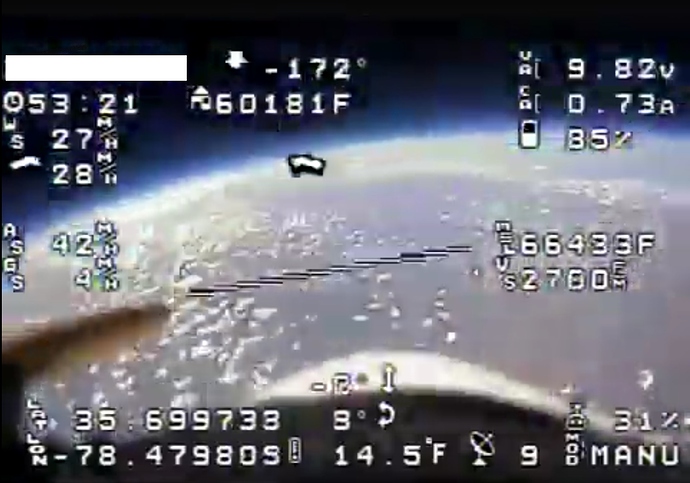 Such a badass shot. This is from the arduplane space project right? I just came across it a couple days ago. Amazing stuff, i’m dying to find out if they went somewhere with it.

“The winds up there”… even if the wind speed was 200mph relative to the ground, the baloon and plane would be in still air, moving with the wind

that depends on the air density/hight and the gusts, plus the different surface area of the balloon and the paylpad. i have seen several payloads make loopings around the weatherballon

Hey! I’ve done a similar project to this back in 2017, and am so excited to see your progress! Although my topic was “Glider Radiosonde”, I think system wise, it’s pretty similar.

Hope you make more progress on your project and hope this helps!

oh shit that’s tight, do you have any videos? I’d love to see them if so. I tried to make my own flight controller as well but never got as far as you, I got mixing and controls working with PID and did a bunch of glide tests back in… i think project logs 4-6 but just changed to Arduplane & cubepilot after that. No GPS.

Thanks for the articles as well. Damn Switzerland, seems like people with drones just get clearances easy left and right there. FAA is nowhere near as cooperative

My project is actually a failure, I switched from home-brewed PID control system to using iNAV autopilot at the last second, and didn’t do a test flight in the end

. Quite sad about that but oh well, I might try it again.

Also, the research paper I linked did experiments near the north pole due to the clearances needed, as you mentioned. Tough, but doable I guess

How has your project progressed so far? And also, why not using GPS?

We are using GPS, my home brewed PID stab code just didn’t mix GPS I to it.

I have a new cubepilot orange + Here2 GPS that I’m testing on now - hardware wise this thing is great and it shows but softwares still gotta catch up. I feel like I won’t have to buy a new autopilot for the next 5 years which is nice

Progress wise, I have it running with an airspeed sensor now until we try to find a way to get a clearance. I haven’t even tried with the FAA but from the people I’ve talked to it’s going to be a ridiculously difficult/unreasonable process. I don’t know if I’ve dropped it in the thread but apparently we need a chase plane (like a real aircraft) to follow this tiny foamboard glider that’s flying at 6-8 m/s. Ridiculous.