Hi,
I am using MP and ArduPilot software in most of my drones. I especially love the survey functions!
When I do missions with my plane, I have the problem that it makes sharp turns at the end of the survey lines. Especially when there is a bit more wind it is hard to get back on track for the plane.
A very nice improvement would be if the plane would do “round” turns at the end of the survey lines (see photo attached). 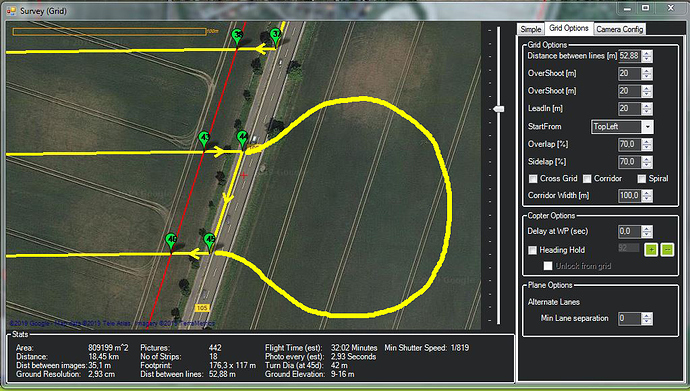 @Michael_Oborne: is there something planned for the future?

i added spline support to copter just the other day, but there is no provision for plane, as it depends on max bank angle, speed.your best bet is to change the leadin/leadout and also turn on alternate lanes.

Yeah I know alternate lines, but its still a problem if you fly at windy conditions. Plane always starts turning too late. And if you raise the WP radius you have the problem that the camera takes photos when the plane still turns resulting sometimes in not taken photos by the camera.

Mission planner has an option to breakup starts. This stop taking photos in banks. Give that a shot

Thanks Michael, I already use that but when you raise the “WP radius” so that the plane will earlier turn to towards the next WP the camera starts taking pictures anyway.

You are using lead-in/leadout? I don’t think I’m understanding the problem

I have not used the lead-in function yet. I will give that a shot! Thanks!