Hello,
I have built a heavy lift Octarotor with a payload capacity of 20kg.
The system is tuned fairly well and there were no major issues during flight.

I was performing auto missions to check the behavior in guided modes. The missions were going fairly well with 10 kg payload, but then I wanted to do an endurance test with full load of 20 kg.

The plan for the mission was to climb to 120m and then perform circles with LOITER_TURNS until the battery failsafe is triggered and RTL. However, once it reached the altitude and began the next leg of the mission, it began spinning uncontrollably and at multiple points during flight there was either one or two motors seemingly stopping mid flight. Any corrections did not seem to work and even multiple RTL commands did not stop the spinning, I even tried uploading a new mission mid flight to no avail. In the end when the system reached a lower altitude, we were able to regain control partially to switch to stabilize and do a hard landing.

One of the mistakes was this is the first time I have tried using LOITER_TURNS in a mission. The parameters I set seem alright, so I’m not sure what caused the spin. I assumed the spin was caused by a motor or ESC failure, but that wasn’t the case, all motor seems to be fine. But need further testing.

Here is the LOG of the flight.
Here is another LOG from a previous auto mission for comparison.

I am unable to deduce the cause for the uncontrolled spin. I need to know if it was a mistake in planning or the it was a component failure.
Any help you guys can provide will be much appreciated.
Thanks in advance.

i don’t see any AUTO missions in the Log, just flight in STAB mode.

My bad, I uploaded the wrong log file by mistake.
Here’s the right file.
https://drive.google.com/file/d/1gk7UI9PMaVMpFxeu1gggvL90ZZ8sYmw2/view?usp=sharing

Ok. 1st I see some serious frame issue it seems some motors are not straight. It struggles to keep yaw. 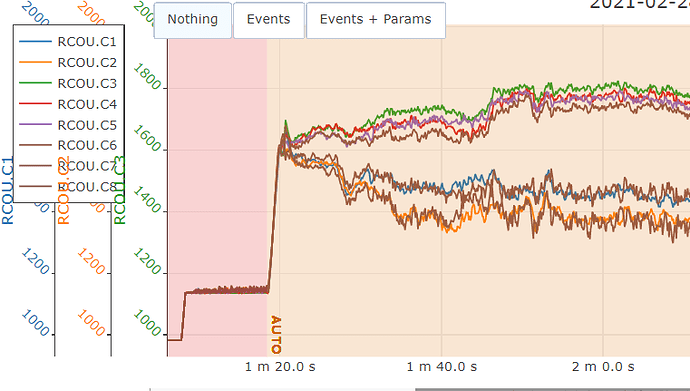 True, I noticed that too. The frame seems to be bent a little, changing the levels of each motor. But it usually corrects the small difference. Here it seems to have just increased dramatically.

It is not small difference, it is huge. And when you put a large payload, it lost yaw authority. Some motors went to min rpm to keep it in the air.

Is that the reason for the uncontrolled spin?
Also the RCout values change completely mid flight, I am not sure why that happened/

In order to perform yaw the motors rotating in the desired yaw direction turn slower and the motors turning against the desired yaw direction turn faster. The copter yaws by using the torque of the motors. The thrust loss of the slower motors is compensated by more thrust from the faster motors.
If your copter is to heavy or must compensate for twisted motors the required speed differences of the motors cannot be achieved without loosing altitude. That is avery dangerous situation, especially if you have so much weight flying in 120m altitude. To rescue the craft you should turn only in the direction where the force from the twisted motors contribute to the yaw movement.